Let's start with a food joke.

Four men take a week long hiking trip in the mountains and because none of them know how to cook, and none of them want to, they draw straws for who'll be responsible. The man who pulls the short straw tells the rest, 'Okay, but if any of you complain then I won't cook again.'

That night they turn up for their first meal and he hands out bowls of a brown greasy gloop which they all taste hesitantly.

'This tastes like shit,' one of the men exclaims. 'But delicious!'

Now let's move on to this: 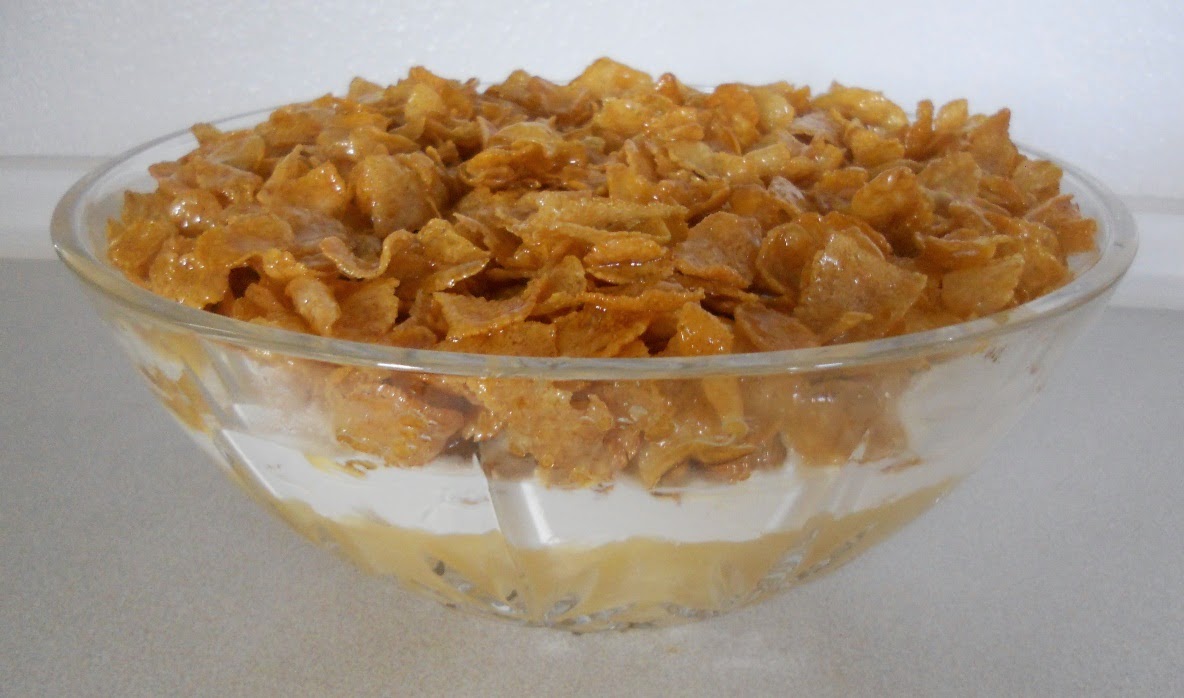 It's one of my easy apple desserts that I've written about before. I've been making it for nearly 30 years and I can't remember where the recipe originally came from. It's basically apples, cream, and cornflakes mixed with some melted butter and syrup to make a toffee topping. Yes, I suppose it's a bit 'nursery' which is probably why an ex-public school friend, now in his late 60s, had 'thirds' when I made it for a New Year's Eve dinner a couple of years back. I think it took him back to all those warm memories and feelings associated with nanny and nursery tea. But it is lovely. And light. And the contrast of flavours and textures really do work together. At least I thought they did.

Last Saturday I took it to a dinner party with friends. Tony'd volunteered a dessert and I wasn't sure of numbers so a bowl of 'Toffee Apple' seemed a like a good idea.

'Is this Tony's contribution?' someone asked. 'Yes, but Lynne made it,' he said. 'It's apple puree, whipped cream, and a crunchy toffee topping,' I said.

'Oh, so basically sugar, sugar and sugar then?' came the reply.

Sarcasm and injustice (it's NOT [foot-stamp] three layers of sugar!) although Tony said later that he didn't think it was meant as a criticism. As a writer I've (mostly) managed to separate myself, as writer, from my writing. You have to, in order to participate objectively in critical workshops. But it seems that the cook in me is still clutching her desserts to her like first born babies!

Hungry Writing Prompt
Write a scathing account of someone or something.
Vent your spleen. And your liver and kidneys.

The ego, being full of self-righteous air, is easily deflated. And re-inflates without too much of a problem. But I've also been trying to remember occasions when I might have been insensitive, or unintentionally mean, about other people's culinary efforts. Maybe there are people out there who will remind me.

But the experience and the process of reflection have made up my mind that I will never refuse anything when I'm a guest in future. I'll take a small slice of the meat I'm not that fond of, or a spoonful of any uninspiring vegetables, and just a little portion of that bizarre looking dessert. I've decided it's just good manners to say 'yes' to every effort someone has gone to.

Truth or lie? Sometimes you don't have to choose either.

Sensitive people are careful with what they say about any creativity. A poetry reading, a dinner party, or an exhibition are not the place for guests to offer criticism. Workshops are where we bravely ask for feedback, and have to gulp on opinions, of which, after the smarting subsides, we often see merit, and they help us develop. Anyway, last I heard, sugar wasn't the main ingredient in any of your ingredients (except the toffee)! x Never lose your inner child. Keep eating wobbly jelly, and calling broccoli baby trees.

I think that I might have been insensitive at some time though... but will watch out for it from now on!

I haven't had jelly for years but I have a vintage jelly mould so I might just make some next weekend! Or maybe blancmange!