The proof of the pudding

I discovered fountains during my pre-Christmas shopping. Not the water spouting out of a stone sculpture or dancing to music kind, but the firework kind you bung in the top of a Christmas pudding and light so it resembles a bomb you might associate with the Roadrunner and Wily Coyote. You know the type – round, with Acme stamped on it and fizzing with inevitable destruction.

I know, it’s hardly traditional, and I did pick a sprig of holly in the orchard on Christmas morning all ready for the brandy flambé performance. But the firework seemed like more fun. And I’d also had a mishap with flambéing in my mother’s kitchen a couple of weeks earlier when I melted the edge of her cooker fan (sorry, Mam!).

The fountains came in packs of three and I have one left. We liked the first fountain in the pudding so much we decided to light a second one. And this last one is destined for another pudding in the near future. Not necessarily pudding as in round and fruity but as in pudding after lunch or dinner. Dessert.

Words are fun. How we use them, where they come from, what they mean. We all have favourite words too… we do, don’t we? Some of mine are: orchard, kipper, deliverance. Don’t you just love how you feel yourself rolling out to the end of that last one as you say it?

I have treated myself to Mark Forsyth’s The Etymologicon. (It’s a pretty irresistible book as it is but at 99p for the Kindle edition it was a no-brainer for me.) The book springs from Mark’s Inky Fool blog and explores the strange connections between words, which brings me back to puddings.

You know the expression, ‘The proof of the pudding (is in the eating)’? Well, the use of the word proof relates to the word’s Roman origins and how the Romans used to test their theories… and found that they worked, or were found wanting.

A pudding, or dessert, that was thoroughly tested and definitely not found wanting at my dinner party on New Year’s Eve was Triple Layer Apple Crunch. Its greatest fan was a farmer friend who had three helpings; I could almost see his eyes glazing over as the pudding transported him back to nursery teas, grass tickling his little boy legs in short trousers.

For me it’s the textures of the pudding that are a great part of its success: the sweet heaviness of apple puree, a cloud of whipped cream, and the crunch of a cornflake toffee topping. Cornflakes! I hear a distant purist shriek. Don’t knock it until you’ve tried it.

I wish I could show you the completed dessert but I’ve been annoyingly forgetful about taking photographs recently. I start out with good intentions… 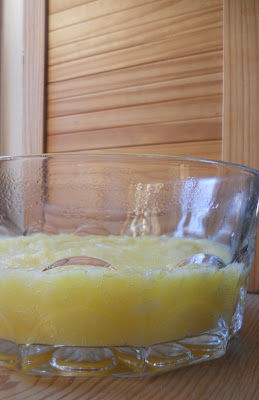 …but you’re going to have to imagine the layers of whipped cream and crunchy topping. Although you can see how a glass dish is essential to the prettiness of this dessert.

I use dessert apples as there’s no need to add sugar but they do take a lot longer to cook down to a puree than cooking apples do. Add a splash of water or apple juice to the pan to get them going, and to avoid them burning, then cook very slowly, stirring occasionally. Leave the puree to cool completely before adding the cream layer.

I whip up Elmlea Double rather than a full animal fat cream as I find it a bit lighter.

For the crunchy topping, melt about 75 grams of butter with half a dozen generous tablespoons of Golden Syrup in a large saucepan. Once it’s melted pour in enough cornflakes to be completely coated in the mixture and pile on top of the cream layer quickly before they start to clump together too much.

Let the topping harden completely in the fridge. It’ll stay crunchy all day so it’s a dessert you can make quite a few hours in advance.

Now… stick in your fountain, light it, and fizzle towards your friends : )

first time at your blog, really enjoy your little tips and tricks to writing as well as food! is that your bookshelf in the background? I see toast by nigel slater, one of my favourite food writers!

Hello Shu Han - thanks so much for popping in : ) Yes, those are my books although it was taken last year and I should probably add a few now! I love 'Toast' - he's so funny.