My maternal grandfather, Dadcu in Welsh, or D'cu as we used to call him, Martin James, had two dietary practices that no one else in my life, then or since, has repeated. He used to swallow a raw egg in the mornings, the yolk bobbing about in its albumen as he tipped the glass towards his mouth. I imagined the yellow dome breaking in his throat as he swallowed. And he sliced cheddar cheese into a glass dish and placed it in front of the open coal fire to melt. Then he spooned it onto fresh, hand-cut white bread. I remember tasting the melted cheese. I remember the pull and slip of it against the spoon, like soft toffee. I kept a safe distance from any involvement with the raw egg.

It didn't occur to me that D'cu's melted cheese was a traditional Welsh dish. Caws pobi: roasted or baked cheese. And some people might wonder what the difference is between melted cheese spooned out of a dish and cheese melted on toast under the grill. But I think you'll have to make some to appreciate it. I suppose, primarily, cooking something at an open hearth pre-dates grilling by some considerable time, so there's an historical element that affects us when we cook this way. But there really is something about the taste and texture and contrast of temperatures that you just don't get with cheese on toast. And perhaps the idea of sitting in front of a real fire, and watching your food cook, taps into a primitive satisfaction and a time when the world rolled along at a slower pace. And, of course, for me, it connects me to my D'cu too, a slight man with a big heart who was old before his time, like so many men of his generation who lost their youth and health to Welsh tinplate works and coal mines. 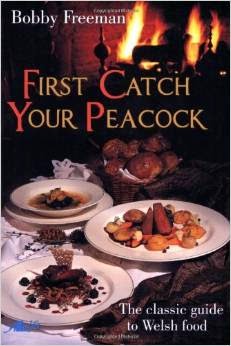 In Bobby Freeman's First Catch Your Peacock, a cross between a cookery book and a history book about the food of Wales, from earliest times right up to the 20th century, she talks about the Welsh early passion for caws pobi, the forerunner of the internationally known Welsh Rarebit and traces references back to medieval and Tudor times. But, interestingly, the cheese best suited to 'roasting' was a hard cheese like Cheddar, and not the softer cheeses then being made in Wales, the result of the soil's acidity, although cheese made from ewe's milk, like the Spanish Manchego was, she assumes, a good alternative.

On my way home to pobi some caws I call for French bread at the tiny Spar attached to our local garage, whose lovely proprietors stock unusual local products and speciality ones from all over the British Isles. I spot a wheel of Ginger Spice, one of the gorgeous flavoured cheddars made by the Snowdonia Cheese Company. And Snowdon is about as Welsh as you can get! 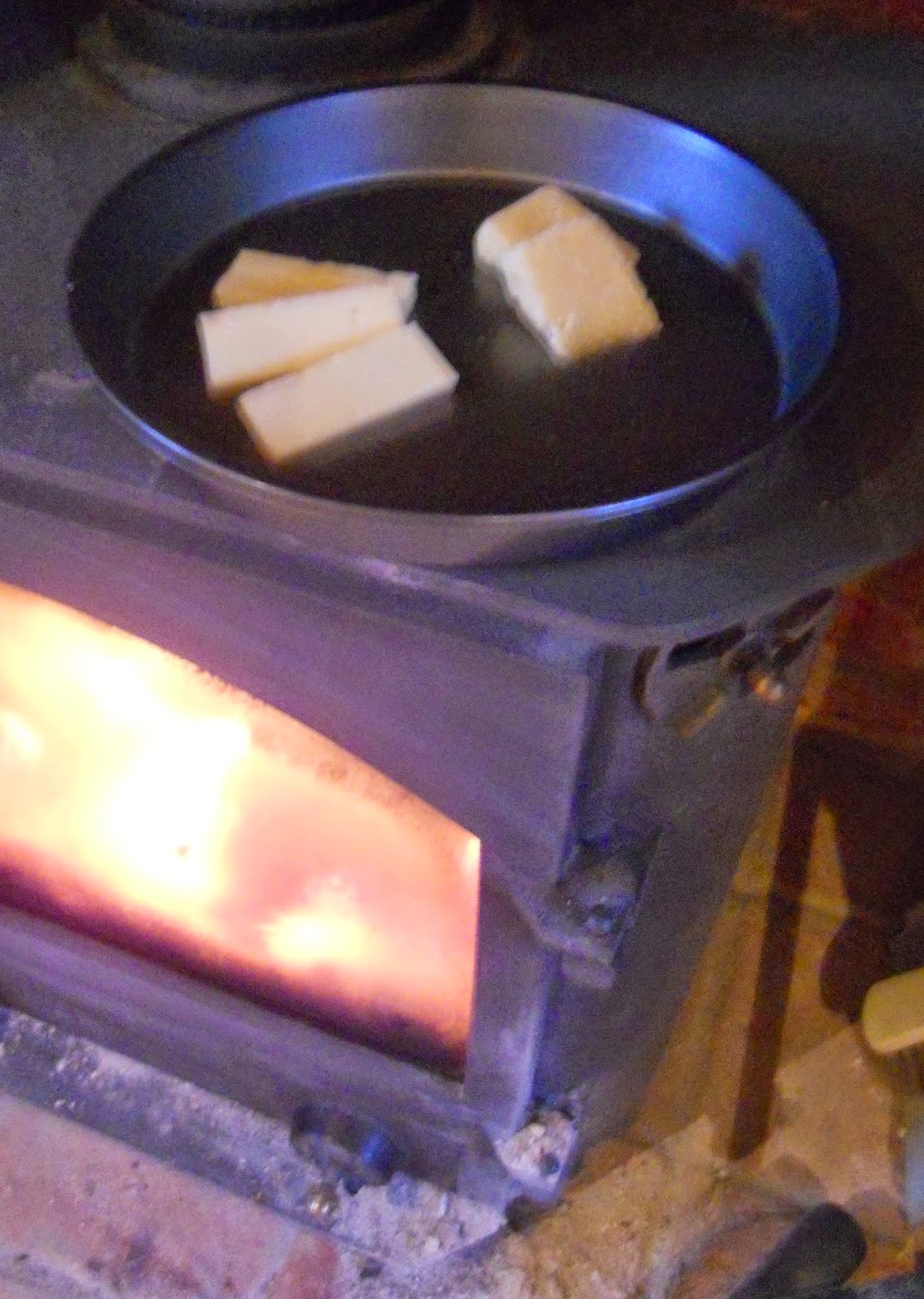 We've had our wood-burning stove roaring away 24/7 ever since we came back from Florida at the end of December and as soon as I put on a pan of sliced plain Cheddar and some Ginger Spice it all sizzled at such an alarming rate I was almost juggling the camera like a hot potato to try and get some shots. In less than a minute they had melted to within memories of themselves and started to burn. But clouds and silver linings and all that... once I'd spooned off what I could and slathered it onto hunks of fresh bread (pause here for some enjoyable chewing...) I was left with a cooling crispy cheese crust that lifted off the non-stick pan like a savoury veil. Parmesan crisps? Forget about them: creision (crisps) caws pobi are the future.

D'cu melted his cheese more slowly, away from the fire's direct heat. Too slowly from a kid's perspective when having to wait for anything makes you twitch and fidget. But I'm also guessing his generation wouldn't have been anywhere near as impatient as we are today when we so easily rankle at a slow internet speed, traffic jams, queues at banks or supermarkets.

I need to tackle caws pobi again: at a different pace. In a thicker oven-proof dish for a start. Or maybe I could prop it on a few logs in front of the wood-burner's open door where I can sit and watch the flames, their hypnotic flare and flicker. Food, like the memories of people we loved, still love, shouldn't be rushed.

Hungry Writing Prompt
Write about the heat from a fire.

that brought back some memory's before going to work for a night shift in the coal mine my father would have this cooked on a tin plate usually placed in the black leaded oven next to the fire , the egg was usually cracked on top off the cheese before placing in the oven ( can smell it now ) , I would wait patiently for him to finish so I could scrape the burnt bit from around the edge of the plate like cheese crisp's , the cheese was kept in the pantry ( no fridges then ) wrapped in greaseproof paper and all way's had a hard dried crust around it .

Elizabeth - that's a beautiful memory. And brought back another one for me: my Gran's pantry, the smell of old breadcumbs in the cool air, a marble slab. Pudding bowls. Maybe there was a Christmas Pudding in one. My dad said this Gran, his mother-in-law, was a terrible cook but she could make a great Christmas Pudding! Thank you!

OMG - nothing better than melted cheese! I love the French melted Camembert (can't remember what it's called). And as for the raw eggs, I think it was a post war thing? Our 'nanny' gave us a raw egg every day - obviously we couldn't stomach it, so she whisked it into milk and stood over us til we downed it.

I don't know the name for melted Camembert - but love it too. And there's Raclette - that lovely wheel of harder cheese melted over a flame and eaten with charcuterie and cornichons - that's gorgeous. And oh yes!! An egg whisked with milk and a little bit of sugar - we had that too : ) Yuk.

Lynne, I have some miners in my family tree as well, though mine were in northern England. I don't know how anyone stands it! This post really touched me, I do so love family food stories, and you tell them so well.

Thanks so much, Jean.

You brought back a couple of memories for me too, Lynne. I'd forgotten my mammy used to give me a raw egg with little chunks of white bread mixed up inside the shell—and I loved it! I don't recall seeing anyone melt cheese in front of the fire, but I remember well the indescribably delicious taste of thick slices of white loaf toasted on the end of a toasting fork in front of a roaring turf (what you call 'peat') fire, with great knobs of melting butter slathered on. Oh, oh, oh! Thank you :-)

Hi Norman - I only ever toasted bread in front of an open fire a few times - but I do remember my fingers getting really hot and having to switch hands! I might have to do this soon now you've mentioned it... maybe even combine the caws pobi and the toast in one session : )))