Daring to know my Manchego with Immanuel Kant

on April 09, 2014
One of the things I learned (re-learned... and again) while writing Real Port Talbot was: Beware of what you think you know. Several times I was aware of my preconceptions of a place contradicting what I was newly discovering; several times I had to remind myself to approach a place like a curious stranger not a familiar (and judgemental) local. There's no surprise for a mind that's already mapped and staked the ground.

Daring to know requires daring to admit what we don't. It also means daring to accept that some of what we have most firmly believed to be true may not be so after all. 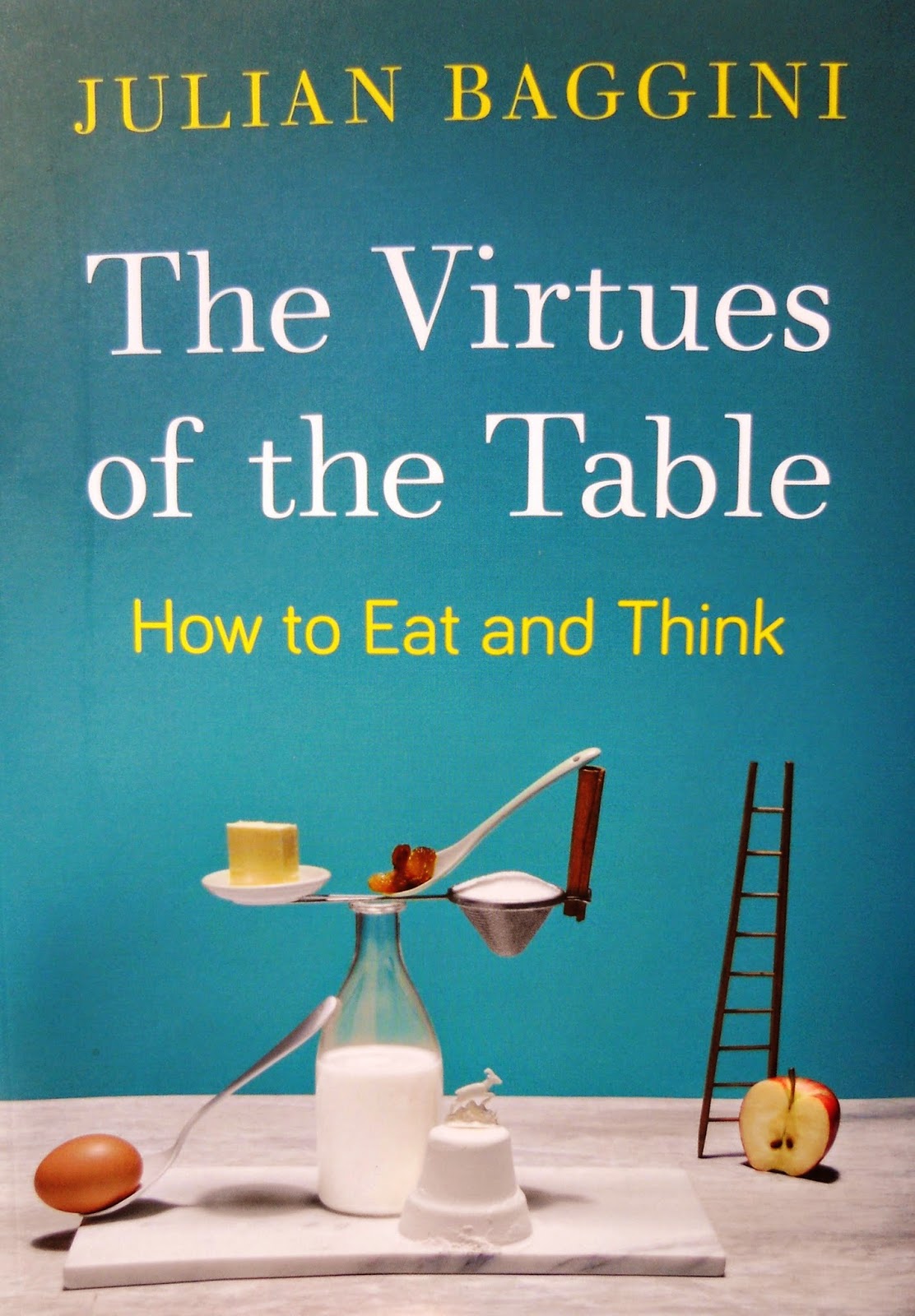 It's from Julian Baggini's book, The Virtues of the Table, How to Eat and Think where philosophy meets the pleasure of eating and 'the riddles and dilemmas and contradictions surrounding the food on our plates'.

It's not just a thinking feast (or a thinking nightmare if the idea of applying philosophy to the day to day experiences of food fills you with dread) though. He tags on loose recipes at the end of every section: I'm only on page 36 and I've nibbled from an inspiring cheeseboard and followed that up with a vegetable risotto and apple and blackberry crumble.

Already his ideas have pushed a few of my buttons and made me rethink what I thought I thought. How about this: buying food that's travelled by container ship from China could be a better choice than food driven through the UK. At least as far as carbon footprints are concerned. His arguments and ideas concerning currently popular terms like organic, local, sustainable, free range, Vegetarian Society approved and even POD - Protected Designation of Origin - are thought provoking. And damn annoying. Who said thinking for yourself would be easy though?

But I am grateful that one of my favourite cheeses, Manchego, a sheep's milk cheese, comes out with one green flag that matters a lot to me: sheep are not intensively reared so animal welfare isn't a major issue here.

And as Cheddar or Wensleydale is to apple pie (to some people), Manchego is to Pear Tarte Tatin for me: crumbly, piquant and nutty meets moist, sweet and earthy. Of course you don't have to have them together - splash some cream on your tart and have your cheese with crackers or oatcakes afterwards. But 'dare to think' or Sapere aude as the philosopher Immanuel Kant said. Though given that an excess of cheese may have contributed to Kant's high blood pressure, his stroke and subsequent death he might not be happy to be associated with this culinary suggestion. But then again his last words were reported as Es ist gut (It is good) about the bread and wine his friend and biographer, EAC Wasianski, had served him so I'm going to assume he wouldn't mind at all. I might even name it after him: the Kant Combo.

(p.s. this recipe for Apple Tarte Tatin can be followed for the pear alternative but add more fruit than my photo suggests... I've remodelled it since then and it looks far better in this later shot. And definitely peel the pear halves too.)

Hungry Writing Prompt
Write about something you used to believe but don't any more.

Norman Darlington said…
Sapere aude! Oh, you do sniff out the most intriguing of books, Lynne :-)
20:18