on June 15, 2011
My French friend, Kate, is telling me about a spat she had with an inexperienced barman at the swanky Les Belles Rives in Juan les Pins who had run up to her with l’addition even though she’d only walked 100 yards away from her table, leaving her bag there, to take a photograph. ‘I thought this was a 5 star establishment,’ she said. ‘In a 5 star establishment the bill is always delivered to the table.’ Kate is all of five foot tall but she can wither someone who crosses her in less than five seconds and the barman couldn’t grovel an apology quickly enough. It’s a good story. But then she goes on.
‘Did you imagine I would filer à l’anglaise?’ she said to him.
Hang on. What’s that?
The verb filer in French is multi-functional. It can mean ‘to spin’ (as in wool), ‘to extend’ (as in drawing out a sound, a note), ‘to shadow’ (as in Police), ‘to veer out’ (as in nautical), to go stringy (as in cheese), and to dash off. Filer à l’anglaise is supposed to mean ‘to leave or go away, without notice or permission’ but the popular use obviously infers a bit more than that! Wiktionary offers the synonym ‘abscond’.
We have a parallel expression in English: to take French leave, and while this is also supposed to suggest leaving without notice or permission:
But as I was certain I should not be allowed to leave the enclosure, my only plan was to take French leave and slip out when nobody was watching, and that was so bad a way of doing it as made the thing itself wrong. Robert Louis Stevenson, Treasure Island.
popular usage tends to be more derogatory:
His insistent portrayal of the French as a race of daffy epicures is wearing thin in Provence II, as is his annoyingly literal translations of French conversations. It's time for Mr. (Peter) Mayle to take French leave. Joe Queenan, Bookshelf: Taking French Leave, The Wall Street Journal (New York), 30th July, 1991
I suppose it’s all down to the good old ‘entente cordiale’ that exists between the English and the French (when the French say les anglais they actually mean, for the most part, the British). We call them ‘frogs’; they call us les rosbifs. Where we say ‘a French letter’, they say une capote anglaise. The one expression that we don’t offer a British English equivalent for is the entertaining Les Anglais ont debarqué – literally, The English have landed, but metaphorically, I have my period. It allegedly goes back to the Napoleonic wars and the redcoats of the English soldiers being easy to spot at a distance and the inevitable aftermath of combat. But in fairness to the French they’re also happy to use their favourite aunt, as in, Ma tante Rose a débarqué, so let’s not take it personally.﻿
﻿

Of course, there’s also the delightful un jardin à l’anglaise – a landcaped garden. And the delicious la crème anglaise, a thin pouring custard they float islands of fluffy meringue on, not as gloopy or startlingly yellow as a lot of English custard. And Les Anglaises – ringlets. Or in my case, as this classic ‘just before the christening in front of the coal-bunker’ photo proves, Les Galloises.
So in respect of true Franco-British relations I have appropriated their classic Tarte Tatin and made a few improvements. Bon appetit! 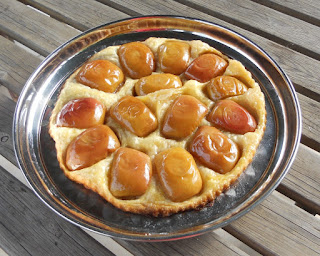 
Slowly melt the butter with the sugar and golden syrup to make a thick caramel sauce. Be careful not to let it burn.
Quarter the unpeeled apples and slice out the core and drop them in the caramel. Stir gently to coat them all and let them simmer for about 2 minutes.
Remove from the heat and take out the apple quarters one by one and place them skin side down in a round dish that doesn’t have fluted edges (this is important as you’ll see later and I learnt about it the hard way). Pour the caramel sauce into a jug – you can heat it up later in the microwave to make it go liquidy again.
Place the round of pastry on top of the apples and press down lightly so you can make out the apple shapes under it and the edge of the pastry looks wavy.
Cook for about 25 minutes at 200° C.
Let the tart cool for about 15 mins then, making sure that no edges of pastry have stuck to the dish, place a big flat plate over the dish and flip it over quickly. This is the point when the flat-edged dish, not the fluted edge, is crucial. The first time I made this in a white stone flan dish, with a fluted edge, hot caramel sauce flicked out all over me. Painful. But delicious : )

Heat up the caramel sauce and trickle it over the tart or serve in the jug on the side. Et voila! Lovely with crème fraiche, or ice-cream, or crème anglaise à la française, of course.
Hungry Writing Prompts

On the cusp of blossoming into teenagers Steve and I are taking a short cut through a Kent Orchard just as the apples are starting to fall into the long grass, already a few are rotten to the core. He has stolen three mouthfuls from one side of a red one when the farmer, a big man with a deep voice, appears like a wicked witch from nowhere.

I’m ready to confess everything when Steve proclaims calmly that this apple is his lunch given to him by his mother earlier. The farmer swears and walks away, leaving the two of us alone in a field of fruit trees: Steve’s now a respected Policeman and the Orchard’s been re-seeded with semi-detached houses, I’m not sure what this means?
17:05