And then there were bees... and cake

on May 20, 2013
Brett, the honey bee man, turned up at 9am a week last Saturday. It was probably the dark green cargo pants and lighter green t-shirt that made me think he was in the Territorial Army but he did have an authoritative, no-nonsense way about him too.
'I thought bees had to be transported at night,' I said.
'No,' he said. 'As long as it's cold enough.'
And cold enough it has been.

We are renting four hives to help pollinate the apple trees whose eruption of blossom is about a month later than usual. They're tucked in pairs beside two of the poplar windbreaks although on the day I took this there wasn't the slightest buzz of activity, but Brett did say that they'd take a while to readjust to their new surroundings.

And he was right because a couple of days later there were hundreds of the tiny brown bees surging in and out of the slot at the bottom of the hive. As Brett lives about 4 miles away there's no risk of the bees heading home: apparently 2 miles is the average distance that you have to move the hives to prevent them from doing that. 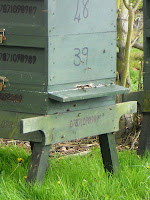 You'll have surely read that bees are in the news. One in three mouthfuls of the food we eat is dependent on pollination at a time when a crisis is threatening the world's honey bees says the British Beekeepers' Association.

The Welsh government have taken steps to protect these essential pollinators. You can read about it here. But Westminster have not taken any similar action and the UK government refused to support a ban of neonicotinoid chemicals in pesticides last month.

Our borrowed bees are safe. But they are a macroscopic part of the bee population in Kent, let alone in the UK. But it seems that the EU has the power to restrict the usage of those chemicals despite the absence of a majority vote. For our sake I hope that happens.

If the bee disappeared off the face of the earth, man would only have four years left to live. Albert Einstein

In praise of honey bees I've made a cake that I last made 28 years ago, a statistic that makes me feel like Old Mother Hubbard! I made it as a dessert for one of the first lunches I cooked after I moved in with Tony in 1985. I'm trying to work out why I haven't bothered with it since and I think I remember one half of it breaking in two when I tried to take it out of the tin which resulted in a mini nervous breakdown complete with tears. I wanted to do things so perfectly then, in an attempt to impress and be the best.

Happily, there wasn't even a cake-scrape of stress involved in yesterday's baking session. Even when Tesco's shelves were bare of blanched hazelnuts. I used the chopped and roasted ones instead. You do need a grinder attachment on your food processor for this recipe as the hazelnuts need to be ground and I've yet to see them on supermarket shelves. Or you can use a coffee grinder, or robust biceps and a big pestle and mortar. I have an ancient electric coffee grinder that I keep for grinding quantities of spices and nuts... the same grinder I used for the first time 28 years ago.

If you're wheat intolerant then this is a cake for you too: no flour. No fat either. Or sugar, at least not in its sprinkly form. Here's the recipe and the instructions from an old ledger I use as a recipe book. 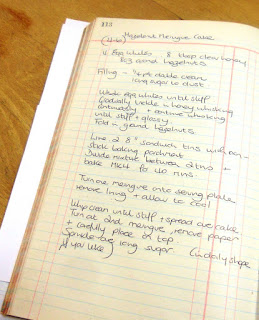 The only change I made was adding some Grand Marnier to the double/heavy cream before whipping it up for the filling. The next time I make it - which will have to be before another 28 years passes or I won't be able to bend down and get the damn thing in the oven - I'm going to go for coffee flavoured cream.

It's a cake that shouts 'afternoon tea'. It has both sweetness and lightness that make me think of doilies and antimacassars and bone china plates and cake forks. But it was only a doily that got anywhere near my attempt. I placed a small paper one on the top before I dusted it with icing sugar... but the sugar fell out of the jar and through the sieve in such a quantity I didn't quite get the effect I was after. More avalanche than light dusting. But it still tasted good.

And enjoy your cake. 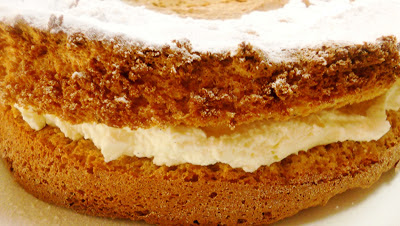 Sophia said…
wow nice cake. I am totally surprised to see this fantastic blog. Thanks for this great share!
17:36

Lynne Rees said…
Thanks so much, Sophia. The cake IS gorgeous... you must try it! Best wishes, Lynne
23:24