I was 26 when I met Tony, back in 1985, and had always lived on my own until then. The idea of shopping for a family and planning meals for days ahead was an alien concept. On our first trip to Safeway together, as I pushed the trolley from aisle to aisle hoping for inspiration and he lagged behind, he said, 'So what are you doing, just picking up bits and pieces, shopping for the week? Or what?' 'I don't know!' But having you drifting around my heels like tumbleweed isn't helping, okay?
I didn't articulate that last sentence. I'd only moved in with him a week earlier and before that we'd spent nine days in total together. This was a learning process for both of us.
I think it's natural to want to impress new loves in our lives: we want to show them (consciously or unconsciously) that we are their best choice, we want to make them happy, we want them to admire us, not be disappointed. I remember making two and three course meals with wine every night – time consuming, expensive and completely impractical when Tony was a full-time professional entertainer at the time, often leaving home at 6pm for a gig in London or Birmingham or on the South Coast.
At the first dinner party we gave as a couple there was more glassware on the table than a banquet at the Palace of Versailles: white wine, red wine, water, digestif… Guests were terrified to reach for the salt and pepper in case they set off a crystal domino run.
27 years later we’re both, inevitably and gratefully, a lot more relaxed. And making a fuss of each other isn’t an obligation, duty or attempt to impress: it’s a treat for the treat-maker and the treat-receiver. This was my treat for Tony last night:

Salmon with Chilli Ginger Sauce (there's orange, garlic and soy sauce in there as well). I think the new 'Masterchef, The Professionals' series on BBC2 is having an effect. I made those ‘shaped’ Dauphinoise potatoes too, baked them in fried egg moulds wrapped in a double sheet of tinfoil.
I haven’t tackled a new dish for some time and I’d forgotten how much time cooking involves… thinly slicing those potatoes and making carrot and courgette ribbons with a knife was a bit of a hack. I’m buying a good mandolin at the weekend.
The recipe is a Hairy Dieters one. And I’m breaking all rules by adding a photo, so please go and buy the book. It’s brilliant: real food, great tastes, easy recipes. 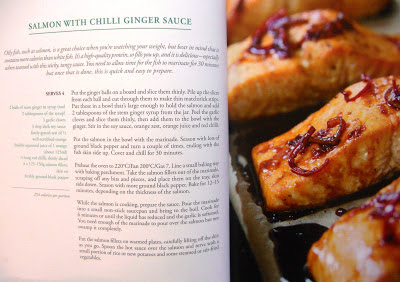 I, too, tried to impress in the kitchen (well other places too, but we won't go there!). I tried to cook like my ex-huband's mother, a wonderful southern cook--cornbread and casseroles, chicken and dumplings, cakes and cookies. I never mastered her caramel icing, my sons' favorite cake.

Now I am with a man I can be myself with. We love to experiment in the kitchen and try new dishes. It's so much fun! But every once in awhile I still have the urge to make a big pot of chicken and dumplings! ;-)

Lynne, when I met Rachel (now my wife) a year before you met Tony, I went to great culinary lengths to impress her, and duly impressed she did appear to be. I prepared a steamed fish dish from the medieval al-Baghdadi (via Claudia Roden) which involved a sauce of tahini soured with vinegar and rosewater, with roasted whole coriander seeds. Accompanying this was steamed burghul and halloumi, and a Greek horiatiki salad with the sweetest (and most expensive) olive oil. All washed down with my own homebrewed perry. I mean, even you might have been impressed (back in 1984 anyway), right?

It was quite some time later that Rachel would confess that forcing the food down her throat out of politeness was done only with the greatest effort. Still, at least she pretended! One thing I did notice: that fish recipe was dropped from subsequent editions of Claudia's book. Now I wonder why?

Hi Terri - thanks so much for stopping by at the hungry writer. I've been wondering if it's a result of genetic and social conditioning - the need to impress our men in certain ways - and whether young women of present and future generations won't have that need? But then again... perhaps it's biology - and men and women will continue playing out different behavioural patterns to impress (and keep) their partners? It's material for a conference I think! x

The things we keep secret!! Love that story, Norman. Tony told me, a few years after the event, that he'd been horrified I'd said 'tough shit' to him one day during the first few weeks we were together. Apparently no women had ever spoken like that to him. Poor sod didn't know what else was in store!