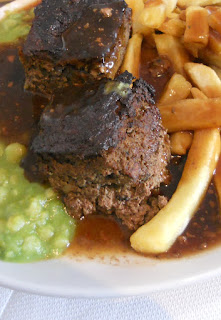 You wouldn’t have seen me within sniffing distance of these 30 years ago and I like to think that it’s a discerning palate and not age that accounts for my conversion. I’m sure there’ll be a whole swathe of people out there who would still step back quickly at the mention of them but if you belong to that group try and rein in your prejudice, and stifle any early memories of four sloppy granular balls in an aluminium container with a cardboard label stamped with the word ‘Brains’, until you have visited Bro’s Café on Llewellyn’s Quay in Port Talbot, run by Mark and Alison Mizen, and ordered these little beauties.


Oh unfussy deliciousness. But… if anything needs a name makeover in the culinary world it’s the humble faggot. From a bundle of sticks to a cigarette, from a 16th century abusive term for old stick-gathering women to North American  hate-speech targeting gay men, it’s carrying a lot of baggage before it even arrives on your plate.
Wiki’s page about the origins and evolution of the slang term is well worth a read if only to end up agreeing with the characters from South Park that, yes, it is an insult but that it only refers to Harley riders whose inconsiderately loud motorcycles ruin everyone else's nice time. Love it!
Traditionally made out of pig’s offal with onion and breadcrumbs – I like to think of it as Welsh haggis... but better, of course — I suppose you have to at least not mind the taste of liver to really appreciate good home-made faggots. But surely only the most hyper-sensitive among you could fail to swoon at Mark Mizen’s tray-baked faggots with a satisfyingly crispy top. I don’t know Mark’s recipe and I don’t want to because for all future faggot-hankerings I’ll be coming here. The neighbouring town of Neath likes to think of itself as the faggots and peas capital but the gauntlet is down my little Neathlings.
On Wiki’s other page, devoted to the culinary faggot, there’s an account of a 2004 Somerfield radio advert that was pulled  because it was deemed to have breached the rules on Good Taste, Decency and Offence to Public Feeling of the Advertising and Sponsorship Code, and was banned from future re-broadcast by the industry regulator Ofcom.
A man bored by his wife’s regimented weekly menus would like lasagne but she tells him he’s having faggots because it’s Friday. ‘I've nothing against faggots,’ he says, ‘I just don't fancy them.’ I think it’s funny. And anyway, in my opinion, these days there’s a whole lot more going on in the broadcasting industry that needs regulating.
So, throwing all caution aside, I would like to say that I love Mark Mizen’s faggots. And he can serve them to me any time he likes. Baby. Although a faggot goes very well with a cracker, as I discovered this weekend and as you can see below. No offense intended towards the crackers in my life. 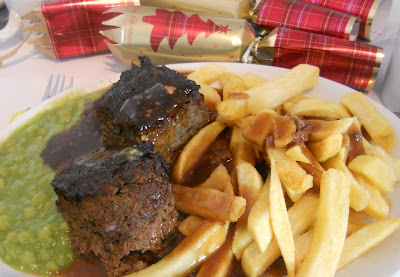 Newly married in Johannesburg I bought a mincer - the one that screwed onto the table -and thought I'd give my husband a treat of faggots and peas. So down the road to our friendly butcher in Orange Grove i sauntered. My turn came round,"Pig's fry and lights, please." "what?" exclaimed the butcher. "Pig's fry and lights." "we give those to the pigs." So my plans for faggots and peas were scuppered but I laughed all the way home and was still laughing telling my husband the story. Result? He won't touch faggots now. Doesn't know what he's missing.

Mark and Alison can expect me sometime. Thanks for the tip, Lynne and incidentally, this is the first time I have visited a blog.

I love them. Always have. Adapted a family recipe to replace breadcrumbs with paxo once in a bread crumb emergency. As a result I now have to make them by trays of 24 on demand in North Wales! Hating being pregnant and spending a winter without them :(

Oh how I used to love Faggots as a child. Mam would bring them home from the butchers in Fairway shops. I used to make mine into "samwidges"using thick crusty bread. Gorgeous

Hi Llewela - I'm delighted your first blog visit was to mine : ) Let me know what you think when you manage that trip to Bro's. xx

Fiona - I'm going to try that Paxo tip! I love it mixed with sausagemeat and used as a stuffing for poultry so I'm sure I'll enjoy the 'Cliffe Paxo Faggot'!

Hi Gary - will have to try that. A chip sandwich and a faggot sandwich on the same plate. Yum!