A will of iron: take a bow, Tony

on August 30, 2012
A couple of weeks ago I mentioned the BBC2 Horizon programme (Donks, fish and muffin tops) about how fasting can make you healthier, and slimmer, and  recklessly announced I was going to adopt the two day fasting/five day eating routine. And I did. For 2 days and 5 days. Then I promptly forgot all about it.
Tony, however, decided to hit the fasting ground running and for the last three weeks his daily diet has comprised of soup, a few grilled vegetables on some days and hot drinks. I think it was the combination of the Horizon programme with the Hairy Dieters' determination to reduce their weight and body fat (one of them reckoned he was the human equivalent of foie gras...) that propelled him into extreme action. But I have to say that Tony does have a will of iron once he gets into the right frame of mind. He also says that he finds it much easier to go with the draconian measures rather than cutting down. There's no such thing as, 'I'll just have the one boiled egg' in Tony's vocabulary. He used to be a peanut butter and jelly sandwich man at heart although he's curbed his sweet tooth a lot in recent years. But he is still a Berton Valley High Eden Cabernet Sauvignon man at the liver though not even a dribble of wine has passed his lips since he started his fasting regime. I'm in awe.
To date he's lost 1st 3lbs - that's 17lbs across the pond, 7.7 kilos across the Channel - and is aiming for another 7 lbs, at which point he'll be around the weight he was when I first met him, getting on for 28 years ago. 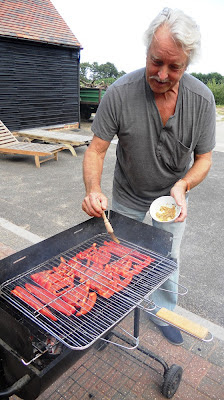 I think another inspiration for him to lose weight was a photo I took in Florida in June, an unintentional unflattering side portrait on the golf course, that prompted him to try the Adobe Photoshop Diet. Now, there's a diet that brings instant results!
One of the things he is eating are grilled peppers, brushed with chopped garlic and a little olive oil. The farmshop down the road has been selling the long, sweet red ones at 3 for a £1. He asked me if I wanted to try them and I wolfed down nearly a third of them before he'd left the kitchen. That was probably 3 days supply for him.
It is such a difficult thing to change your diet, isn't it? Even deciding to eat only fruit for breakfast can take on the dietary proportions of climbing Everest after the novelty of the first few days has worn off and you get up in the morning and really fancy a thick slice of toasted granary bread, slathered in butter and orange marmalade.
Being sensible sometimes has all the charm and excitement of wearing support stockings and carrying a plastic rain mac, just in case. I suppose the trick is to make a change into a habit. And that takes effort in the early days when your mind doesn't want change; it wants roast chicken with the skin on, coconut milk in your curry sauce, a second chocolate eclair, cafe latte with sugar.
I remember what I had to eat the night I met Tony: grilled Lobster. I remember that we drank Mateus Rose.  It's a wonder we actually made it past that first date after he asked me what wine I'd like with dinner and I said, accompanied by what I imagined to be a sophisticated laugh, 'Anything as long as it's not Blue Nun or Asti Spumante!' And he said, without any trace of laughter, 'They're my two favourite wines.' The Mateus was a compromise.
I'm going to Wales on another research trip on 9th September by which time he'll have reached his target weight and we've promised ourselves a good bottle of red, some cheese and bread before I go. I like sharing food. I miss sharing it with Tony. But I also know how important it is to him to lose the weight, not just for how he looks, but for the associated health benefits too. Another 28 years together will do nicely, thank you.
Hungry writing prompts
Write about forgetting.
Write about a habit someone wants to kick.
Write about making a compromise.
Write down the phrase 'just in case' and free-write for 20 minutes.
Write about what you will be doing in 20 years time

Kim - Liv Life said…
Congratulations!!! I need a little motivation myself after a long summer of eating with abandon. Look forward to that wine and cheese... it will be worth it!!
17:15

paroak said…
Good Health to you both! :-D

Caroline said…
Here's to another 28 years for you! Cutting down on sugars and carbs always works for me :) xx
18:21

Lynne Rees said…
Thank you, paroak... and 'egalement' as the french say.

Lynne Rees said…
Yep - sugars as in alcohol are what I have to cut out if I really want to slip down a few pounds.

texas defensive driving class said…
It's really hard to lose weight. My boyfriend is actually having a hard time doing that. Nice photos by the way. You guys are lovely.
21:41