Plain sailing with cats. And bananas.

on November 18, 2011
Chica has been living mainly under the bed since we came back from France three weeks ago – in an under-bed storage drawer on wheels filled with spare bedding. Sometimes, when I bend down to check on her, the drawer has rolled up against the skirting board, or over to the far left. Of course if I try and roll the drawer while she’s in it, she’ll get out. Cats are like that. They will never do what you want them to do, or go where you want them to go, when you want them to. 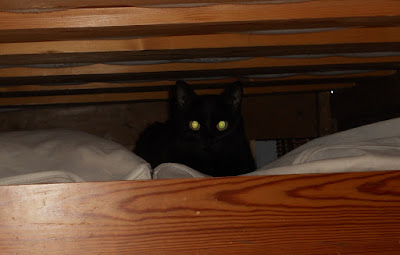 Tony says she’s a strange cat (and she does have her odd ways – she won’t sit on your lap, ever, and she plays fetch, like a dog, with elastic bands) but I think she’s just taking her own time to settle into a different house and environment: from French suburban living to the British countryside, from the screech of seagulls to the low growl of a passing train, from palm trees to apple trees. And a drop in temperature at an average of 6 or 7 degrees. To be honest, I’m having a bit of a problem with all of these things myself.
But overall the 800 mile journey back with her in the car, and the first couple of weeks here, have been pretty much plain sailing. However she still won’t go out during the day, preferring the cover of darkness, and despite all the common sense and logic and ‘she’s a cat’ arguments I tried to convince myself with my stomach still tightened into a nut the first time I watched her disappear around the side of the packing shed and into the orchard, all 20 acres of it.
But, each time, she’s pranced back, cocky as a dressage horse, at negotiating the tarmacadam tundra of the farmyard and the jungle of long grass between the trees, and a whole world of smells she’s never encountered before. 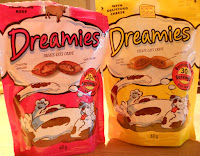 When she comes in I practice my Pavlov’s Dogs routine, feeding her Dreamies so she connects returning home with a reward. (If there isn’t a Cat Psychology degree course out there then there should be.)
The Dreamies are a big success. They must be the cat equivalent of the Macdonald’s breakfast wrap I wrote about last week.


My own rewards since I’ve been back have been:
sausage (British as opposed to French)
sushi (Tesco as opposed to authentic Japanese)
stuffed vine leaves (doing my bit for the Greek economy)
Pinot Grigio (despite only being 40 minutes from Italy the Cote d’Azur staunchly protects its own wine market)
wraps (edible as opposed to pashmina)
I couldn’t buy large plain wheat wraps in the south of France and I can’t say that I really missed them, not while I was living in the Kingdom of Bread. But now that I’m back I’m indulging my banana wrap cravings.
I invented the banana wrap for my granddaughter, Summer, as it was the only way I could get a small amount of protein into her during her ‘reluctant to eat’ early years. And they pretty much do what it says on the label:
﻿
Step 3 might be optional for you but it’s pretty essential for me:
Bananas and brown sugar were born to lie together. After that it’s just a case of wrapping:
And eating.

Summer used to ask me to make this wrap for her when she came to stay. She also once asked me why she was free to do whatever she liked in my house which came as a bit of a surprise because I’d always been really strict with her as far as bedtimes, mealtimes and TV watching were concerned. But within those clearly defined boundaries she obviously did feel free.
What I Remember
(For Summer)

How Dadcu wore his belt buckled at the back, pulled
so tight around his skinny waist the tops of his trousers

fluted like piecrust; how he swallowed raw eggs, breaking
the yolk in the chamber of his throat; how the fire roared

behind yesterday’s paper stretched across its mouth
and Granny melted cheese in dishes on the grate,

kept an open tin of condensed milk for tea. The lumpy
featherbed, the musty wardrobe, a chocolate coloured fur coat.

And what will you remember? Your granddad throwing you
in the air, the fat china woman on the edge of my bath,

the window at floor level in your bedroom looking down
on red tiled roofs, sheep in long grass, the apple orchard?

Or the day we smeared our faces with burnt cork
and you said You are my best friend. But no,

that is what I’ll remember, and how you asked
Why do you make that funny face when you look in the mirror?

Sailing Florida said…
I love the idea of having a cat play fetch with me although I imagine the absence of the wagging tail might need quite some time to get used to. I have had the wonderful opportunity to try out a Filipino snack called Turon which is similar to the dish you describe in the sense that it is a banana wrapped with brown sugar although without the cheese and with spring roll wrapper instead of the tortilla wraps.
14:27

Lynne Rees said…
Hello, Sailing Florida - thanks so much for stopping by and for the snippet about the Turon too. All good wishes, Lynne
11:21