on January 19, 2011
At school and at Sunday-school I closed my eyes, clasped my hands together and prayed in English and Welsh: Give us this day our daily bread: Dyro i ni heddiw ein bara beunyddiol, words I repeated by rote that meant nothing to me.
It came to us in a van that toured the estate, street by street, whose back doors opened to slatted shelves and the smell of flour, where I gazed at the plump Cottage loaves and imagined carrying one home in my arms like a baby. But I always parted with the half-crown piece for the disappointingly smooth, pale crust of a Sandwich Loaf that my mother would cut with a silver knife. 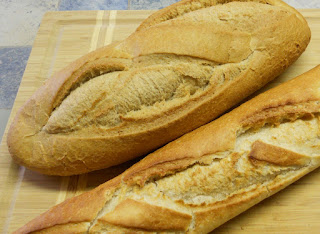 At mealtimes, unless there was gravy on our plates, it sat in the middle of the table – bread and butter, bara menyn – thin slices, cut in half, which we were expected to eat, out of habit, tradition, a memory of hunger.
For years I bought it, threw so much away, dry and forgotten, riddled with mould. But now I live in the kingdom of bread: baguette, ficelle, couronne, pain au restaurant, de campagne, de seigle, au levain. Its scent drifts from every corner. It comes wrapped in twists of paper. I carry it along the street, arrive home with crumbs between my teeth. The power and the glory; yr nerth a’r gogoniant.
Hungry Writing Prompt: Write a poem in praise of an ordinary thing.
Kanwar’s Perfect Baguette Test
According to my nephew, the perfect baguette has a sound like the first soft cracklings of a log fire, or the crinkle of thin silver paper, the type I remember from old cigarette packets, when you hold it to your ear and squeeze it, gently, between your thumb and fingers. And after all the bacon baguettes he has eaten from his tuck-shop at King’s School in Rochester he is something of an authority on the subject.

I’ve yet to run the test in the UK but here in France I choose a baguette that’s pas trop cuit, not too cooked, one whose crust is lightly golden rather than caramel. But unless I’ve managed to synchronise my purchase with the moment the bread leaves the bakery oven it’s unlikely to meet with Kanwar’s approval.
So preheat the oven to 200° C for around 10 minutes and pop in your baguette for 2 minutes, no more. If you have the fatter pain au restaurant (the French bread you generally buy in British supermarkets) it’ll need 3 to 4 minutes.

And, squeeze.
Home-made croutons
Cut day old bread into roughly ½ to ¾ inch cubes, removing any crusts that are too hard.
Mix olive oil with crushed garlic (or minced or powdered dried garlic if that’s all you have), dried herbs and salt to taste and toss the bread in this mixture. It should be slightly damp on the outside rather than saturated. Cook on a baking tray at the bottom of  the oven, on a low heat, about 125 to 140° C for 10 minutes. Shake and turn and cook for another 10 minutes until they are crisp throughout.
Lovely on leafy salads or home-made soup.

Huw said…
Cottage Loaves, indeed Lynne, always fancied one! and French bread is a wonderful thing, i believe you have yet to experience petit dejeuner avec brasille! its croissant dough rolled very thin then sprinkled with sugar then folded multiple times then rolled very thin, repeat about 20 times, then into the oven! it is the best breakfast food ever, as long as you don't mind a little sugar
15:20

LoriAngela said…
What a treat to find and read your blog! When I grow up I want to take a creative writing course.
21:51

Lynne Rees said…
Huw - I'm now on a mission to find these in Antibes!

mely said…
I bake my own bread must of the time. Usually let it light gold to freeze for later use and the just pop in the oven when ready to hear.

Thanks for the recipe and for sharing in Simple lives Thursday.

Lynne Rees said…
Gracias, 'Mexico'. I'm glad I found you too - just taken a look at your chorizo soup. I love chorizo... discovered it when I lived in Barcelona in the mid 1990s.

I'm making a note to keep up with Simple Lives Thursday... I couldn't add my blog to Foodblogs as, while I'm food orientated, I don't think there are enough recipes on the posts for it to be accepted, but I do get a daily update of headlines.

Look forward to bumping into you again.
11:52

the good soup said…
Hi Lynne, Your baguette memories remind me of my 6 cold dark months in Paris (not everyone's experience of Paris, I know!). I was working in a restaurant all day, and at night I would by a baguette and chew on it all the way up the 260 stairs to my attic apartment. Luckily, I had my best friend there, working with me, chewing with me. We both liked our baguettes pas trop cuit.
07:30