Programmed to Eat and A Nice Cup of Tea 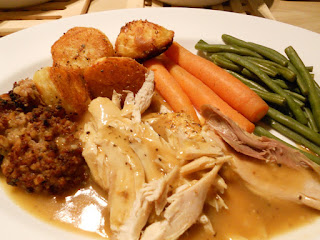 Are we born with some of our our food preferences already genetically programmed? I don’t mean not liking the texture of raw tomatoes, or preferring custard to cream, or heating up your sugar puffs in the microwave for 30 seconds. I’m talking about the cultural relationship to our food. I don’t know any British person who doesn’t look forward to, or who doesn’t starts salivating at the thought of a roast dinner, personal hostilities towards parsnips or sprouts aside.
I have drawn the line at cooking a traditional Sunday lunch during the summertime here on the Cote d’Azur – there’s only so much heat any cook can take – but outside of those months the preparation and the cooking and the dishing up and the eating of a plate of roast chicken, roast potatoes, carrots, green beans, sausage-meat stuffing and gravy makes me feel all happy and glowing inside and out.
I’ve tried the roast dinner on French neighbours and they have appeared… well… indifferent. Politely complimentary, yes, but not enthusiastic by any stretch of the imagination. None of the mmmms and aahhhs and cors that I’m used to hearing, and contributing, around a table as a fragrant wisp of steam rises off the gravy jug, when someone takes their first bite of crisp then soft potato, that first sweet taste of a honey braised carrot.
We’ve had some strange, some inedible, and some delicious meals at private houses in Antibes though I believe that the less successful ones had more to do with a general lack of interest in food combined with a deeply felt obligation to return invitations. At one dinner we ate cheese at every course: a salad of mache (lamb's lettuce) with crumbled blue cheese, endives wrapped in ham and baked in a cheese sauce, a tripartite cheese course, then cheesecake for dessert. If someone had given me a glass of citron pressé I’d have curdled.
Last week I invited my neighbours, Lydie and Josiane, for tea. Josiane is a fan of all things British so I set out my plans to make a traditional cream tea: sandwiches, scones and cake. Josiane’s medication over the last few years has left her with serious food allergies and while I could negotiate my way around shellfish and nuts (it’s astonishing how nut by-products find their way into all kinds of products here… cream cheese is one) there is no way I could avoid a raising agent for the scones and cake but commercially produced baking powder, that can contain aluminium compounds, was on her prohibited list.
When I explained I could use bicarbonate of soda and cream of tartar as a replacement they both looked unconvinced probably because they’d never heard of cream of tartar. It appears in the dictionary as Crème de Tartre but that still meant nothing to them. And to be honest if I had serious allergies then I’d be suspicious of ingesting something that allegedly originates from the coating that builds up on the inside of wine barrels.
But it all turned out fine in the end. We had les salées, the savoury part: 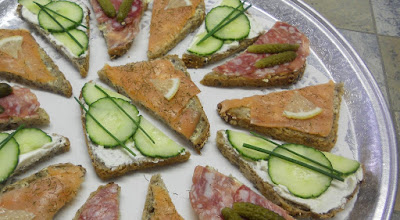 And then les sucrées, scones and Bara Brith (the recipe is here), both made with plain flour and and the oomph of bicarbonate of soda and cream of tartar: 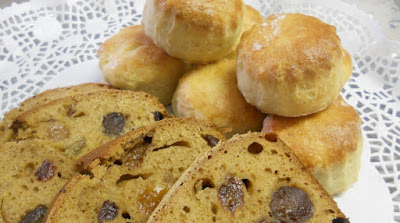 And if there’s one thing I love it’s people who eat with interest and enthusiasm. Scones cut in half and served with jam and cream? Hmmm… how about spreading a little butter on that cut scone too? Oh yes, Lydie. Bon idée!

So cream teas don't fall under my genetic food programming theory. But tea, as in ‘a nice cup of’, definitely does.

If you order a cup of tea in an Antibes café you get a cup of warm water with a tea-bag on the side. (I once made my French electrician a cup of tea, British temperature, and he sat in front of it for about 15 minutes terrified to take a second sip.) The tea-bag is usually Lipton’s – the yellow sachet of bog standard tea you find on mainland Europe and in the USA but rarely, if ever, in the UK – or, if you specifically ask for it, a bag of thé vert a la menthe, green tea with mint, also delivered with warm water.

Then there are the herbal teas, although they aren’t called teas here (which makes sense given they’ve never even rubbed up against a tealeaf) but tisanes which are pretty identical to the range of herbal sachets in the UK. You know the ones? They all smell different but all taste the same, a kind of cross between Beecham’s powder and fruit sherbert?

Bill Bryson talks about tea’s dramatic history and the growth of Britain’s sweet and milky love for it, in the chapter on ‘The Dining Room’ in At Home, A Short History of Private Life. While I drink mine strong (builders’ strength) with only a dash of milk and a good squirt of honey I am definitely genetically programmed to that British predilection of tea at anytime of the day. In fact, here comes one right now. 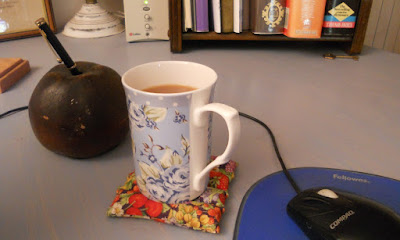 I avoided any tea issues with Josiane and Lydie by serving champagne instead. You know that motto: When in doubt, drink champagne?

Living outside of Britain for the greater part of five years has made me reflect on a lot of cultural differences, far more than I thought there would be. But that's the subject of another hungry writer post, appropriately one of the last ones that will come from France. See you next week.


Press it out to about a 2 cm thickness and use a small fluted cutter (mine’s about 4.5 cm in diameter) dipped in flour to cut out your scones. (You can, of course, make thicker and bigger scones and that would be Tony’s choice. When he’s presented with small portions of anything – cheese, cake, a dollop of cream – he always refers to them as ‘welsh’ portions. Are you wondering how we’ve managed to stay together for 26 years?!)
Brush the tops with the egg and milk, scatter flour over the hot sheet, then pop the scones on to bake for about 8 to 10 minutes. Keep an eye on them. They might need less.

Eat them all up straight away. Or you could keep them for later in the day.

ah, I remember, way too well, the limp bag of tea and warm glass of water that stands in for a good cuppa in France. Why don't they just ban the practice of tea drinking and be done with it? Call it a cultural coup.

Tout a fait! On the positive side I have never had a bad cup of coffee here in Antibes with my favourite being 'une noisette' which is nothing to do with hazelnuts, as you'd imagine it to be, but the south of France equivalent of a cafe macchiato - an espresso with a splash of foamed milk on top.

Good idea to sidestep the issue by serving champagne! Tea as we know it is pretty pathetic stuff in France. They go in much more for infusions. I'm more of a coffee drinker myself but after a long walk or an afternoon's gardening I do like a decent cuppa.

Hi Vanessa - I'm one of two extremes with coffee. The short sharp fix of un cafe/espresso or a big milky one. I'm not a fan of 'americain'. But I don't know what's happened to Grand Cafe au Lait here... it was always big and milky years ago. Now it's small with more water than milk. My best ever milky coffees are in Italy - caffe latte is exactly how I like it.