on April 27, 2011
My first boyfriend emailed me last week. He’d read The Hungry Writer and told me I should write about where we both grew up. About Aberavon Beach and the day-trippers who came down from the valleys by the coach-load, he said. About the Welsh mams who sunbathed in their Playtex bras. Grandmas paddling with their skirts tucked into bloomers and eyes like sheep dogs on the flock of kids in the shallows. And Dads and Uncles swilling pints and playing housey in the Bay View until chucking out time at 2 o’clock.
When he reminds me of ‘Lost on the beach is a little boy’ booming out across a mile of prom I remember how far out the tide could be some days, the Trampolines and the Roller Skate Rink. I can almost feel the ridges of prickly heat that used to rise on my arms during the summer, the cool chalky scent of calamine lotion that my mother tried to soothe them with. And at the far end of the Prom, past the Jersey Beach Hotel, there was the Miami Beach Amusement Park that glittered with goldfish and painted rides and smelled of candyfloss and diesel; where, in my early teens, dangerous boys with slicked back hair and black leather jackets shouted over the music and span you faster than you wanted to go. ﻿
﻿The beach has changed so much since my childhood. The fair was eventually dismantled and the area cleared in the 1980s. The derelict Jersey Beach Hotel was demolished after a fire in 2001. The Beach Shops, little bookends of shops linked by seating pavilions that were dotted along the Prom, were closed down in the 1970s. Mrs Johns ran the one closest to our house in Chrome Avenue, just two streets back from the sea. She sold us Black Jacks and Fruit Salads, White Mice and Rainbow Drops, Flying Saucers and Sherbert Dabs. She was a small, plump woman who counted our sweets into white, triangular paper packets and span them around to seal them, twisting the two top corners into little ears. And even the name of the beach changed too – from the anglicised Aberavon back to the Welsh language spelling of Aberafan, where a single ‘f’ is pronounced like a ‘v’. 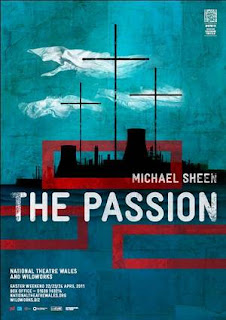 Aberafan Beach was featured on the UK national news over Easter. Thousands of people turned up to witness Michael Sheen’s astonishing community Passion play that roamed the beachfront, town and hills behind Port Talbot for 72 hours over Easter weekend. Sheen, now Hollywood famous, grew up in Port Talbot and I’d seen him being interviewed in the Aberafan Shopping Centre when I was home in Wales last month, had noticed posters for the performance all around the town, but I had no idea of the scope of the project, the involvement of a whole community, until the BBC evening news on Good Friday. The report showed a scene on the beach with Sheen’s character, The Teacher, removing a jacket strapped with bombs from a woman.
‘That was Francine Morgan,’ my mother told me by email. Francine who was in the same form as me for seven years at Sandfields Comprehensive School, who was so sophisticated and lovely in her white stretch boots and three-quarter length raincoat at an age when I was still cycling around on an old bike and wearing a hand-knitted bonnet that buttoned under my chin. Francine who remembered the notes on the lines of the treble clef, EGBDF, with ‘Every Good Boy Deserves Francine’, who went to University after her ‘A’ levels but within a few months turned her back on academia and enrolled in drama school instead.
In March I jogged from Chrome Avenue, up the Prom along the white painted railings to where Victoria Road joins the eastern end of the beach, around the site of the old Jersey Beach Hotel where apartments and townhouses have since been built, and back down the Prom, to the far end where a rest home, Swn y Môr, now blocks the view of the sea, but hopefully not the sound, from the people who live in Scarlet Avenue.
What is it exactly that pulls me back more and more often to the town of my birth despite some the changes that make parts of it unrecogniseable? Is it more than just close  family, shared memories? How much does the landscape of our early years shape our psyche?
What tugs me to this beach each time I come home, regardless of the weather? I looked at this sea from my bedroom window every day for 19 years, remember running my fingertip along the windowsill, gathering into piles the tiny salt and pepper grains of sand that found their way through infinitesimal cracks in the old wooden frames.
The tidal range here is one of the largest in Europe, although as a child it inspired resentment rather than awe when on some days the hike to reach the waves went on for an eternity across the damp sand with its scatterings of coal dust and little tangled knots of mud made by lugworm under the surface; the people behind you, dotted across the fine white sand near the seawall, getting smaller and smaller and the seashore ahead of you as far away as ever.
Having reached my half century horizons don’t seem that far away anymore.
Bara Brith (Speckled Bread) 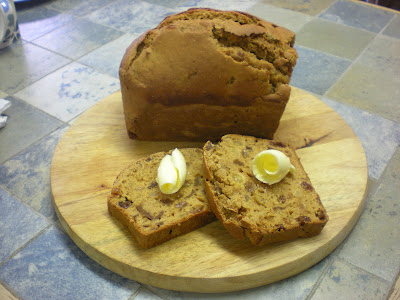 I don’t remember ever eating this as a child. I do remember Tiesen Lap (pronounced TEE-shun), a lightly fruited sponge cooked in a tray rather than a cake tin, that formed part of the Cookery syllabus at school, along with, in ascending order of difficulty: blancmange, sausage rolls and rock cakes. Perhaps the advance preparation for Bara Brith was too intensive, too risky. Soaking dried fruit in nearly a pint of hot tea overnight and then carrying it to school the next morning exceeded the Cookery teacher’s expectations of us.
The following recipe comes from Favourite Welsh Recipes, compiled by Sheila Howells and published by J Salmon Ltd, UK and I tweak it a little here and there. I use a mix of sultanas and raisins (no currants), ordinary black tea (I’ve tried Earl Grey because I thought it might complement the lemon zest, but it isn’t tea-y enough for me), a mix of white and wholemeal flour so it’s a little lighter, and ground nutmeg because the mixed spice that’s as common as crumbs in the UK is difficult to get here in the South of France. But it still ends up delicious.
10 oz mixed dried fruit
two thirds of a pint of hot tea
3 oz soft brown sugar
grated rind of 1 lemon
12 oz self-raising wholemeal flour
1 teaspoon mixed spice
1 large egg

Soak the mixed fruit in hot tea, cover and leave to stand overnight.
Set oven at Gas Mark 4 or 350 F and grease and line a 2 lb loaf tin.
Strain fruit, reserving liquid, and mix with other ingredients, adding a little of the reserved liquid to achieve a soft dropping consistency.
Pour into tin and bake for about 45 to 55 minutes.


It has a kind of bendy/rubbery feel to it when it first comes out of the oven which makes it difficult to slice until it’s cool. But it is so lovely spread with unsalted butter when it’s still a little warm so it’s worth tackling the rubberiness and cutting off one end, and a slice or two. 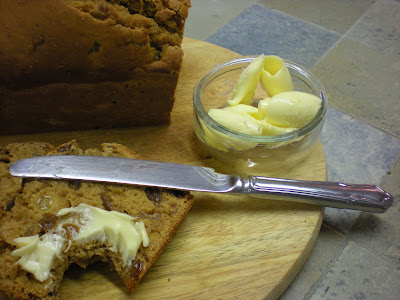