1. Lunch on the Beach


September feels a little odd to me, here on the Cote d'Azur. Perhaps it’s the contrast between the guest filled house of the previous months and the distinctive silence I’m living in at the moment: I’m on my own for two weeks. But I wonder too if I’m genetically programmed to see September as the start of autumn, an in-between month that ushers in change, and so I feel at odds with 30 degrees centigrade and bright blue sky. There’s no reason why I can’t continue with my daily visit to the beach but… it’s September.
September used to be the smell of a leather satchel and new black school shoes pressing into the back of my heel. Or, back at work, watching a summer holiday suntan start to peel and fade. It was preparing modules for the new University term, the branches of apple trees heavy with fruit, almost touching the ground. Woodsmoke. Now it’s the dichotomy of walking past clothes shops wearing flip-flops and a sleeveless cotton dress while the window mannequins are wrapped up in checked shirts and lambswool sweaters, full length boots and quilted jackets.
But today I experienced all the delights of an extended summer with an unexpected invitation to lunch on Helios Plage in Juan les Pins and watched the waiter prepare beef tartare for my friend, Patrick. 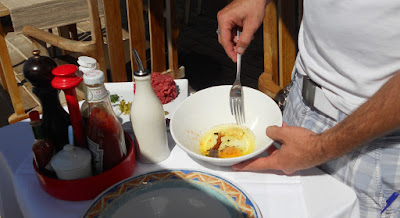 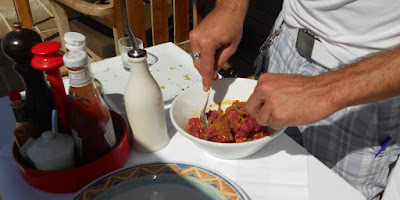 Beef tartare is something I always like trying from someone else’s plate but not something I ever wish I’d ordered, as delicious as this one looked and tasted. It’s not that I don’t like raw meat – I had a plate of beef carpaccio with rocket and parmesan. I think it’s more to do with the texture and flitting images of mother birds regurgitating worms into baby birds’ mouths. I can safely say that’s not something you’d expect to read on a food blog, which leads me on to:
2. Creepy Crawly
Actually this should be number 3 but I can’t waste a good link.

I didn’t count its legs but I think it’s a millipede that must have been making its way from the open back door across the kitchen while I was making the Lemon (Drizzle) Cake (see 3. Cracking Eggs in One Hand). It was 3 inches longer than I like them to be but I caught it on the recipe sheet and flicked it onto the grass outside. Maybe he had September issues too.
3. Cracking Eggs in One Hand
I’ve been thinking about food processors. I’ve got to the point of Googling images of them and checking out reviews and articles on the Top 10 currently on the market. I won’t bore you with my research as I’m holding back from buying one until I return to the UK. It’s a hell of a long way to go if it breaks down under guarantee. In the meantime I am still using an electric hand mixer that I’ve had for about 30 years, a relic of my time in Jersey.

It’s probably a testament to Krups that it’s still working even if the ends of the metal whisks that clip into the motor get hot enough to blister your skin if they drop onto your hand!
Using a hand whisk means that being able to crack an egg one handed is an advantage. And I did it today for the first time in my life. Without thinking that I couldn’t do it. Without worrying I’d splatter an egg everywhere. Without dropping any shell into the creamed butter and sugar. And I did four of them. One after the other. Each egg plopping softly into the mixing bowl.
‘Watch me,’ I remember my granddaughter saying when she was four.
bedtime
suddenly she’s learned
how to hop
Is it possible that our brains store all the memories of our early accomplishments? Those little bursts of joy when we caught a ball for the first time, or swam into someone’s arms. I’d like to think that the delight I felt today, as each eggshell broke perfectly in half, was an echo of those small successes. But how many others have I allowed myself to miss throughout my adult life because of days when I’ve picked and scraped at the world instead of being open to the possibility of new things?
When my mother made cakes she gave me and my sister the choice of licking the mixing spoon or scraping out the bowl although I remember wishing she’d leave more for us than the skinny traces our tongues could find around the handle of the spoon and under the rim of the bowl.
You obviously wouldn’t want to eat as much as this (would you?):

But it’s a good feeling, after filling the cake tin, to end up with a licked out bowl that looks like this: 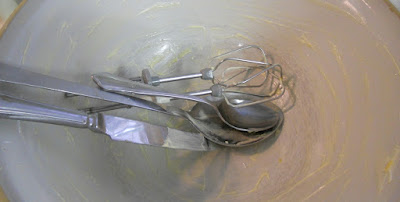 I bought a zester today and after zesting the knuckle on my left thumb I wished I’d splashed out on the more expensive model that looked like a tall, skinny grater. The one above is Italian. Perhaps Italians have the required knack.
Cream 225gr of fine caster sugar with 225gr of butter until it’s pale and creamy.
Add 4 eggs, one at a time (yay!) and mix well after each one.
Sift in 225gr of self-raising flour.
Add the zest of two lemons.
Mix it all together, pour into a lined loaf tin and flatten the top with a spoon.
Cook at about 180 degrees for 45 to 50 minutes.
Check that the centre of the cake is cooked with a wooden skewer.
Now here comes the (Drizzle) bit which didn’t quite work out for me.

Mix up the juice of one and a half lemons with 100gr of caster sugar.

Make lots of little holes in the cake with the skewer and pour the ‘drizzle’ over the warm cake. The lemon juice is supposed to soak in and the sugar is supposed to set like a gauzy crust on top.

Maybe my cake was too hot because I didn't get a sugar crust. I tried a little later with some more juice and sugar and still no sugar crust which is obviously meant to hide all the little holes. Maybe it wasn’t warm enough at that point.

But it still tasted nice. Very lemony. Maybe a bit too sugary and lemony around the edges where all the drizzle seemed to have settled. I had to unstick my gums from the sides of my mouth and have a strong black coffee after the second slice!

Well I can guarantee your new processor won't last half as long as that Krups, no matter how much you pay! I guess 30 years ago, engineering companies hadn't figured out that you make more money out of a consumer if they replace their appliance every 4 or 5 years; or their pride in their product outweighed any such newfangled consideration. Sorry about the rant, but it's something I've been acutely conscious of these last few years.

I've never been quite able to face beef tartare, yet have no trouble downing platefuls of sashimi (or oysters, for that matter). Weird :)

I'm envious of your September. It's definitely autumn with overtones of winter over here! Thanks for once again bringing smile after smile with your writing.

Hi Lynn!
1) The whole article with photographs made me hungry, although I guess that also has something to do with the fact that I read it at the end of my working day.
2) I paid special attention to the writing prompts, and will promptly (like tonight) try them out.
3) I find pleasure in the thought that a lot of a holiday is in one's head. September can fall mentally somewhere in March, or the other way around. When that happens, it might feel that it's the duty of the seasons to catch up with you. :))
Thanks for your article! (And thanks to Norman for making it visible!)

looking
at pictures of food
my inner child

I love reading your blog Lynne-you evoke the days of childhood so well-the sensual awareness that is so entrenched in the present moment, the smell and feel of things, and that wonderful memory of licking the cake bowl and wooden spoon.Thank you!x

Hi Norman - your rant is my rant! I still have a portable TV from my Jersey years too... okay it only picks up 4 channels but it works! I prefer oysters just cooked a little. There's a restaurant in Juan les Pins that snips them out of the shell, puts them back, pours over a champagne sabayon sauce and flashes them under the grill. They just tighten up a little - the stuff dreams are made of.

Big thanks for sharing THW with people too.


Lovely to meet you here, Ella. Thank you for posting your haiku in response. If you're ever in need of more writing prompts then call back in on any Wednesday. : )

Hi Wisty - thanks so much for your encouragement. It means a lot to me. x

I feel a little sad that I've been away from your blog for so long. And it's been entirely unintentional. I love it here. Where have I been? Trapped in real life, that's where. I've hardly visited any of my old friends in blog world in the last month. I hope you'll forgive me, and not feel abandoned.

Hi Angela - it's always lovely to read you here, no matter how often. I've been a bit distracted by life's shennanigans myself though that should resolve itself with the move back.

Thanks so much for the food processor advice - that's SO helpful.