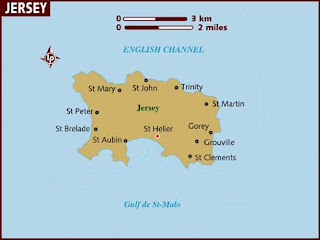 ‘Do you fancy a coffee?’ I say to the new girl with the big brown eyes when she opens the door of the bed-sit opposite mine. I’ve seen her a couple of times at work and there’s something both intimidating and inviting about her: the way she looks at you and holds your gaze without blinking, the same way some babies do. This morning we said ‘hi’ when we met outside the laundry room on the ground floor of Langham House. I think she could be my friend.

She looks straight at me. ‘I’m pregnant,’ she says. The rims of her eyes are about to overflow with tears.
No-one has ever been so suddenly and bluntly open with me before, and about something so personal too. And it feels like a gift, something precious I've been given.  I don’t even remember thinking about what I will say next.
‘Do you need to borrow some money?’
‘Yes,’ she says, ‘and I’ll pay you back at the end of the month, I promise.’
And she does.


After an introduction like that perhaps it’s not surprising that Alison always seemed rather exotic to me: a little dangerous, unpredictable. South Wales and Romford were hardly universes apart, and we were almost the same age, but she seemed to be so much surer of herself than I was, as if she’d already decided to live life according to her own rules regardless of what anyone else was doing or what they said.

She always made up her eyes with the same dark smoky shadow and kohl. She bought a double duvet for her single bed so there was more to wrap around her and it never slipped off. If she woke up with a hangover she’d take a bottle of tonic water spiked with vodka into work to delay the full whack of it until the end of the day. And she changed all of her underwear everyday. Not just her knickers, but her bra too, which at the time struck me as particularly extravagant! 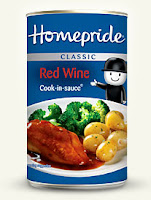 We decided to cook our first meal together on the day she moved across the hall to share my bed-sit: chicken portions baked in Homepride Red Wine Cook-in Sauce with roast potatoes.
‘But how can we make roast potatoes?’ I wanted to know.  At home in Wales, roast potatoes came with a roast dinner. If we weren’t roasting a joint of meat or a chicken where would we get the fat to cook the potatoes?
‘With cooking oil,’ she said, ‘in a pan, in the oven,’ as if I had landed from another universe.


We both worked for the Midland Bank Trust Corporation in Jersey. I'd arrived in April 1978, Alison at the beginning of 1979, the year of my 21st birthday. I had a party at the Bistro Borsalino in St. Helier with a menu that included Moules Marinieres, Coquille St. Jacques and grilled lobster, a menu I couldn’t have dreamt of a year earlier, but fourteen months later, on an island with so many good restaurants bursting with French cuisine, it had become pretty standard fare to me.﻿
﻿

﻿At the edge of one photograph, taken at the table, there’s a glimpse of Alison’s mother. I’d forgotten her parents were visiting that week and I’d invited them to my party, although they didn’t come back to our bed-sit later that night where the party continued at length in an expectedly drunken fashion. ﻿﻿

What I do remember is her mother pushing open the door the next morning to find Alison lying on her back on her single bed, wrapped in her double quilt, with her feet propped up against the wall, singing the opening lines to Jerusalem over and over again: And did those feet in ancient time…

﻿﻿The next time I saw Alison’s mother was even more memorable for all the wrong reasons. She came to collect Alison who’d spent three months as a voluntary patient in the mental health wing at Jersey Hospital.

﻿﻿Why didn’t I see it coming? Perhaps I did and chose to ignore it. After all I was 22 and totally absorbed in my own romantic escapades. We’d already started to spend less time together because of boyfriends, and then she had another abortion and not long after that she split up with the man she'd been seeing for over a year. She was also getting into trouble at the bank because of an 'attitude' and for taking too much time off sick. When she was threatened with dismissal, she resigned and moved out of the subsidised bank accommodation. I remember feeling impatient towards her because everyone else seemed to be in the wrong; she was always the victim. But I still wasn’t prepared for her call one Sunday morning to come and pick her up at A&E because they wouldn’t let her leave unaccompanied. The duty nurse told me she'd arrived the night before saying she'd overdosed on painkillers but when they pumped her stomach there was nothing there. A week later she committed herself to the mental health ward and agreed to a course of electric shock therapy.

Sometimes we don’t know what’s best for ourselves, so how can we be sure of what’s best for other people? How can we really know what anyone else’s distress feels like, how deep it goes, what they might need to avoid it, erase it, or deal with it? Maybe this is what Alison needed to do but I hated visiting her after a treatment and seeing her in a near vegetative state. And I remember feeling anger and confusion towards her parents who only flew over at the end of the three months to take her home. I knew for certain that my parents would have been on the first flight over if it had been me. But my relationship with Alison was not their relationship. And perhaps they harboured an equal amount of anger towards me. Surely a friend could have prevented her disintegration, or should have recognised the signs and warned them, or someone, before things got so bad? Although I can't help thinking they were embarassed by her too, their 'crazy' daughter. And it probably wasn't an unusual reaction at that time. Her father stayed in the car when they came to pick up her belongings. It was a withdrawn Alison who rang the bell while her mother avoided looking at me from the other side of the road.
﻿
﻿But this story doesn’t end badly. A year or so later, she was back to full health and working for the Midland Bank in London. I stayed with her at her parents’ house in Romford for a weekend and we partied at Covent Garden and Stringfellows. We went to Lanzarote together one Christmas, to Marbella the following summer. She came back to Jersey for holidays. And it was down to Alison, and a dancer friend of hers, that I ended up meeting Tony on a blind date in 1985 at the Old Court House in St. Aubin. And it was Alison who I called 20 days later, before anyone else, from Tony’s house in Kent to tell her we were engaged.

‘I knew something like that would happen,’ she said, and then she burst into tears.

She subsequently met and married a policeman, had two kids, who must be in their late teens and twenties now. We sent Christmas cards for a few years and then we lost touch.

Can friends last a lifetime? They seem to for a lot of people, but mine tend to be compartmentalised into certain sections of my life. But that doesn’t make them any less precious, or present.

﻿﻿Alison and I once cooked a whole meal from Robert Carrier recipes in the weekly magazines I collected at the end of the 1970s – starter, main course and dessert – after which she complained that she’d never sieved so many things in the course of one day. Carrier wasn’t user friendly, or at least not user friendly enough for two girls in a bed-sit preparing everything on a counter-top Baby Belling Cooker with two rings. The Pommes Dauphinoise were one of the easier dishes we cooked, and the one that was appreciated most by the two guys we were cooking for.
‘Are there any more of these?’ one of them asked.
But there weren’t. I’d followed the recipe to the exact ounce of potato and they cooked down to half their original size. These days I know better than to trust a recipe when it says ‘enough for 4’, particularly if you’re cooking for potato freaks like me or hungry men.

In my version of the Carrier recipe I slice the potatoes very finely and soak them for 30 minutes or an hour to eliminate the starch then rinse and dry them completely between kitchen paper. They can’t be dry enough, but don’t do this until you’re ready to use them or they’ll go brown.

I then layer them in a dish with a light scattering of very finely chopped onion, salt and freshly ground pepper between each layer, finishing with a layer of potato. In the UK I use Elmlea Whipping Cream (part dairy, part vegetable oil) and pour it over until the cream is just visible under the potato layers, then I sprinkle grated gruyere cheese over everything and more ground pepper. Here in France I use the equivalent of single pouring cream.

﻿﻿Don’t use too deep a dish or they’ll take forever to cook. A big shallow dish that’ll take 3 layers is a good idea. Cook for about 90 minutes in a medium oven until soft and bubbling and golden on top. Cover the top with foil if it gets too brown.

But… while in Wales recently I found this recipe in the Western Mail: 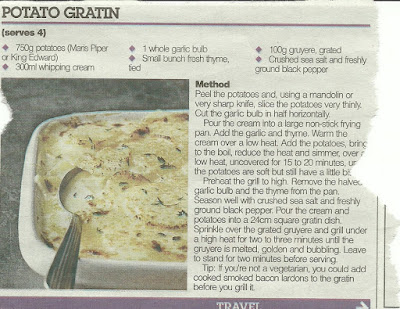 I am yet to try it but I like the idea of simmering the sliced potatoes in the cream infused with garlic and thyme. However, as you might expect, I’m not convinced by ‘serves 4’ and I’d put the dish in a hot oven for 30 minutes, or more, instead of using the grill to make sure the potatoes are cooked right through and the cream has been thoroughly enough absorbed.

(p.s. the bit missing from the middle of the recipe where the paper tore awkwardly? It’s: until the potatoes are soft but still have a little bite.)