Morfa: In Memory of Lives Lost 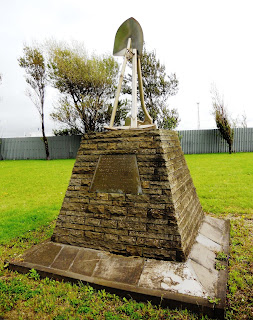 Morfa Colliery was sunk on Margam Moors (now situated within the town of Port Talbot, South Wales) between 1847 and 1849 by Messrs. Vivian & Sons to feed their expanding copperworks at Taibach. It was known as a 'gassy' and a 'fiery' mine and there were six explosions there between its opening and closure in 1913.

More than 200 men, boys and one woman died at Morfa during those years and a memorial to them has been erected, near to the original site of the mine, within the TATA Steel plant in Port Talbot.

The following poem, written for a memorial service held on site on 8th March, 2019, will appear in Remembering Morfa: Stories of Coal, Catastrophe & Courage by myself and Port Talbot family historian, Allen Blethyn, to be published at the end of 2020.

John Peppin, b.1857, was one of 87 men killed in the Morfa Colliery Explosion on 10th March 1890. His body was not found until December 1894, one of the last to be recovered. Between five and nine men remain entombed in the old workings.

Mary Ann Peppin’s hat, shawl and jacket, which she wore to her husband’s funeral on 15th December 1894, are held in a collection at the National Museum of Wales.

It is an unearthly thing to bury a man
almost five years dead. You swing
from cold grief to release, from the ache

you still carry in your blood and bones
to the comfort of the hymn you sing
in the Chapel of Ease. It is cold today.

Your two youngest girls, four and six,
have stayed at home. The two boys
fidget next to you on the wooden pew,

the memories of their Dad as faint
as ghosts. Your eldest stares ahead,
her face as pale as your jacket’s lace trim.

And all the years between then and now
spill their dread and fear through
this vault of stone and glass:

the first news of the blast hammered
on your door in Brick Row, the two miles
you ran in the coal-black dark,

breath nettling in your throat, to join
the other women praying and crying
at the mouth of the pit. You kept vigil

for as long as you could until
your breasts ached with so much milk
you ran home again to feed the baby.

You remember the candles in the windows:
West End, Chapel Row, Inkerman,
the Constant, flickers of hope and pain,

and Mrs Jenkins weeping for days
through the Row’s thin walls after
her boy was brought up dead. And on

it went, weeks, months, and then the years:
men recovered from the seams and delivered
back to earth. The mind has curious ways.

Even after they flooded the pit,
some mornings you’d wake sure
of seeing his sweat-streaked face.

You never did again.
Not after they came on Tuesday
and told you he’d been found tucked

in an air-pocket in the Cribbwr seam.
‘In a wonderful state of preservation,’
someone said and someone else

kicked him in the leg. And not
when Roderick’s brought the coffin:
you told them to be sure it was sealed.

The vicar’s drawing to a close.
You stand and watch the bearers take
your husband’s weight upon their shoulders,

and draw your children near. Poor dabs.
And not just yours. How many was it?
200 one paper said. And 69 widows.

Outside the chapel a sudden gust
lifts the ribbons on your hat, black
streams of silk in the wounding winter air.

The ground is hard beneath your feet.
You make yourself smile
for your children’s sake, look them

in their trembling eyes and think
about the men still waiting to be found. 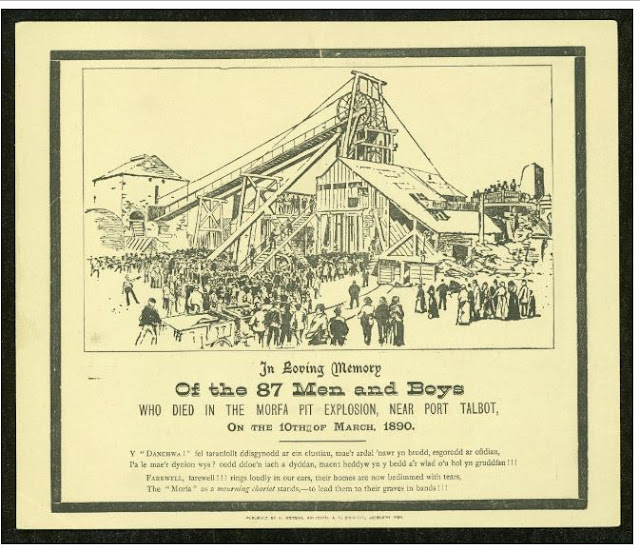 Norman Darlington said…
Oh, Lynne, that is so moving. Did you read this yourself at the service?
18:14

Lynne Rees said…
Thank you so much, Norman. Yes, I did. As the memorial is on TATA land (erected by them), and health and safety and security is a big issue, there hasn't been a service there before but a friend of mine who is passionate about local history, and who works there, arranged this. Next year is the 130th anniversary of the biggest explosion so we hope to have something else organised and to include relatives of the men who were never recovered.
09:26

Kathleen Earsman said…
Your quiet voice, in an almost conversational tone, as if you knew her, as if you were there. Vivid, viscerally so, took my breath and made me want to look away, but couldn't. Small details that had to have been true: it was real for sure; her breasts hard with milk, the wind lifting her black satin ribbons, the 'wounding summer air.'
Brilliant, Lynne.
13:08

Lynne Rees said…
Thanks so much, Kathy. Yes, a lot of the details were based on fact - the number of children they had (from the census in 1891), where they lived and the other street names, the number of children left fatherless, where he was buried. The newspaper reports from that time made for harrowing reading too.
13:55

Kathleen Earsman said…
Congratulations in bringing those details close for us. Harrowing, yes, but drawing close to the tragedy of others brings insight and empathy. Thank you.
20:37