on March 12, 2018
When I was a child in the 1960s the honey sold in the local Co-op was Gale’s but I was only interested in the ‘thick’ one that I loved to spread on toast for breakfast. If my mother had bought the ‘runny’ one instead I’d pass on the honey in favour of Bramble Seedless jam.

These days I use clear, pourable honey in my spiced tea. I add a squirt or two to my homemade vegetable soup to temper the acidity of tomato. I drizzle it on roasted carrots. I whisk it into cream to dollop on apple cake or pie. And I make hot toddies with it, adding lemon juice, nutmeg and a shot of whisky. 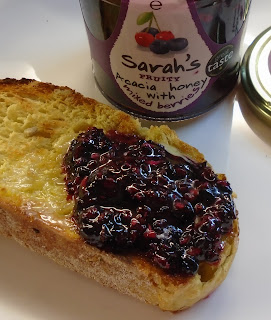 But I still prefer a creamy set honey spread on buttered toast. At least I thought I did until I tasted Sarah’s Acacia Honey with Mixed Berries.

‘Taste this,’ I said to my husband, handing him a slice of toasted corn bread.

Because it seems that after 50 years I’ve found an alternative response to my childhood predicament of choosing bramble jam over runny honey. Mix them together and create this fruity and sweet concoction of deliciousness!

And I should now be able to tell you that I stopped there and didn’t open the jar of Sarah’s Honey with Ginger until breakfast the following morning. But I can’t. There was a set honey v runny honey dilemma to solve after all. 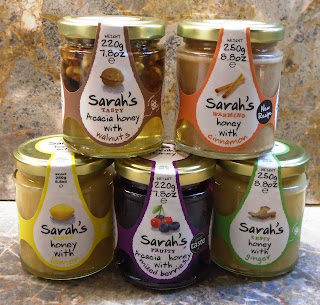 Sarah’s Wonderful Honey is blended and packaged by the family run firm, Mileeven, based in Co Kilkenny, one of the leading honey suppliers in Ireland, and I have been reading their website like a book: how they started, their products, recipes, and answers to FAQs, some of which I didn’t know I wanted to ask:

Q. Why is some honey 'set'?
Set honey is just a variation on the consistency. There is nothing else added to it to make it set. Some honeys have a thicker consistency naturally - like sunflower or rape seed honey.

But my favourite page is Everything Bees:

In her lifetime a bee will make 1/12th of a teaspoon of honey and will fly the equivalent of two times around the world.

That’s enough to make me appreciate every drop of honey I will ever eat during the rest of my life.

I think it’s true that we are now far more aware of honey’s natural health-giving properties, and its power to heal, than we were during the last fifty years of the 20th century. The development of life-saving antibiotics inevitably led to a decline in the appreciation of natural remedies, honey being one of them with a healing reputation stretching back to Ancient Greece and Egypt. And it was still being used in the treatment of wounds right up to World War II.

But there’s no reason why drug-based and natural medicines can’t work together, with the latter generally being the better option for colds and flu, coughs and sore throats.

And I guess we are so very lucky that honey tastes so very good too. Forget about ‘a spoonful of sugar makes the medicine goes down’. Honey is the medicine.

But back to my set honey v runny honey dilemma. Has it been resolved? Have I been converted? 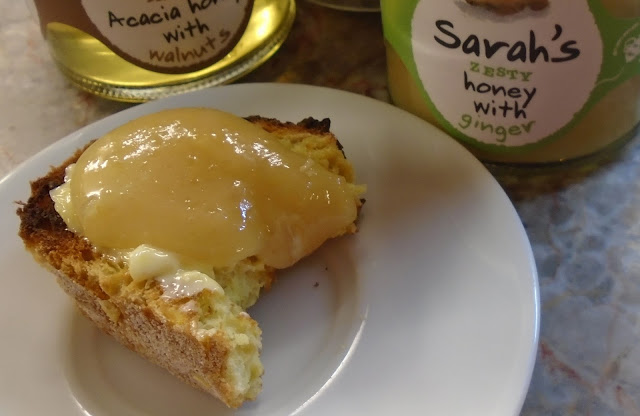 Sarah’s Honey with Ginger is melt in the mouth gorgeous with a lovely kick of warmth. But I’m not ready to publish my findings yet. After all, there’s still Acacia Honey with Nuts, Warming Honey with Cinnamon, and Zingy Honey with Lemon left to try and it's important that my research is thorough, isn't it?

I may be some time. As Winnie the Pooh said about honey, "Eat and eat then repeat." 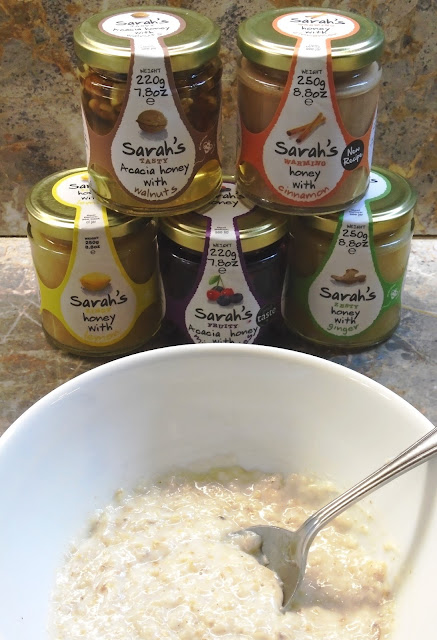