on March 21, 2017
My childhood biscuits were mainly plain but had lovely names: Marie, Nice, Rich Tea. Quiet biscuits. The kind of biscuits that would never interrupt a conversation. Polite, not pushy. At the other end of the spectrum, and only irregularly present, probably a result of practical economics, were cheeky Jammy Dodgers, irritable Garibaldis, and self-contented and reliable Bourbons. And even more irregularly, the flashy inhabitants of a Christmas Box of Biscuits: Pink Wafers. I ate them at the same time as not liking them very much, a bit like Miss World Contestants in sparkly dresses, too much eye make-up and a saccharine idea of world peace. 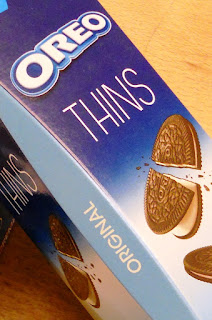 I'm in the mood to think, and personify, 'biscuits' because the lovely team at Oreo sent me some samples of their new Oreo Thins. I hadn't heard of Oreos until the early 1990s when a friend asked if I would bring him back a packet from a Florida holiday. I forgot and pretended I couldn't find them. 'But they're everywhere in America,' he said, both astonished and suspicious. Which of course they were. Because the Oreo is a 'mythic biscuit', or at least that's the impression I have from reading their Wiki entry and talking to my American friend, poet and writer, Patricia Debney.

'Yes, Oreos definitely have an iconic place in US food culture. To the point where I'm thinking 'thins'? Oreo THINS?' she said when I asked her about them. Because the whole point of Oreos is, apparently, the filling. And millions upon millions of American children, across a century, have gently eased off the top layer of biscuit, ate it, then scraped off the sugary white filling with their teeth, until not a smear of said filling remained, and then ate the second biscuit disc. Patricia, who's now in her fifties, told me, 'I'm not sure I have EVER eaten an Oreo whole.'

Nabisco, the manufacturers of Oreos, capitalised on the filling's attraction in 1974 and marketed the 'Double Stuff Oreo' with twice the amount of cream filling which, if you were careful, you could pop away from both biscuit sides and eat on its own.

And then there were THINS.

I haven't shared a THIN with Patricia: I do not want to be the person to shatter the Oreo passion of her childhood and youth. And as I haven't ever before eaten a standard or super-size Oreo I can, perhaps, be more objective about their 'lighter' siblings. The Oreo Team describe them as the 'playfully, sophisticated addition' to the Oreo range, 'thinner, crispier and guaranteed to tantalise your taste buds and awaken your imagination!' That's a lot to ask of a biscuit but then Marcel Proust, in Swann's Way, the first volume of his seven volume novel, Remembrance of Things Past, showed the world how a madeleine, a simple sweet cake, was capable of conjuring involuntary memories:

And as soon as I had recognised the taste of the piece of madeleine ... immediately the old grey house upon the street, where her room was, rose up like a stage set to attach itself to the little pavilion opening on to the garden which had been built out behind it for my parents ...; and with the house the town, from morning to night and in all weathers, the Square where I used to be sent before lunch, the streets along which I used to run errands, the country roads we took when it was fine. 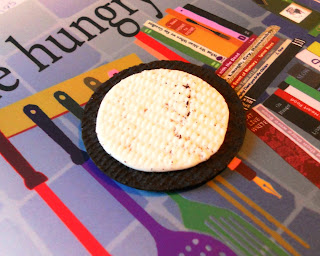 But back to the THINS. And tradition. Following Patricia's instructions, I gently flipped off the top layer of biscuit and ate it. Then I scraped off the creamy filling, but a little too enthusiastically. The bottom disc snapped like a crisp. But the 5th biscuit held up ... And maybe that's the appeal (or one of them) of THINS - you can eat so many more of them!

And how do they compare with my own childhood biscuit memories? I'd classify them as cousins to the lovely Bourbon. Sophisticated city cousins. The ones that turn up in the countryside in silk gloves and high-heeled shoes but we still love them for their brightness; they're so much fun to be around. We serve them sherry (now there's an idea...) and listen, wide-eyed, to the stories they have to tell.