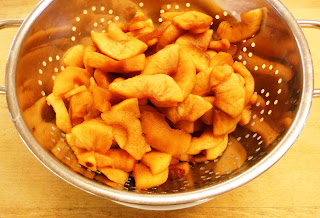 One thing leads to another...

An online recipe for apple liqueur, back in October, asked for four pounds of apples to be soaked in sugar (halve the quantity of sugar if your apples are very sweet) and a bottle of brandy for two weeks. After straining and bottling the liquid - which doubles in quantity, by the way, so make sure you have two bottles handy - this is what remained: sweet, brandy softened apple slices that were far too delicious to throw away. So I froze them. Or, at least, I put them in the freezer, overlooking the scientific fact that alcohol doesn't freeze. But yesterday, two months later, despite having failed the total cryogenic test, they tasted fine to me so I let them sit overnight in the kitchen to relinquish their semi-frozen state, and created the following dessert. Although, given its simplicity, assembled would be a more accurate term. 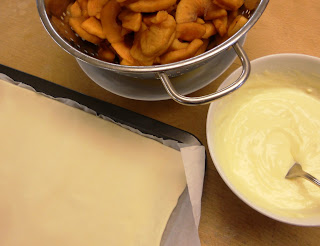 Unroll a sheet of ready-made puff pastry and spread with a mixture of cream cheese (8oz), icing sugar (2oz), cornflour (2 tbsp) and one egg yolk, leaving a border of at least 1 inch.


Top that custardy layer with apple slices - tee-totalling slices would be fine, I'm sure, in the absence of drunken ones - and fold the edges of the pastry up and over. That's it.

As usual, in my excitement to serve dessert I only remembered to take a photo of the golden Drunken Puff after four of us had demolished over half of it. I'd also been planning to dust some icing sugar over the top too for prettiness. Oh well, next time ... 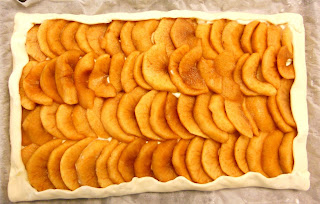 Drunken Puff seemed a suitable name for it - those apples pack a significant brandied punch. But I couldn't help but think it was an equally appropriate description for the presidential inauguration in the US last Friday, for a man puffed up and drunk with his own self-importance.

'Give him a chance,' people have said to me on social media. And I'd really like to, if there was anything I could base that trust on, if there was anything he'd said throughout the whole of his campaign, right up to Friday's inauguration, that I admired or felt hopeful about. Perhaps his often ridiculous contradictions and lies will stop now that he's in office. Perhaps he won't feel the need to defend himself against the slightest of criticisms and will review his language to avoid being misogynistic, racist and bigoted. Perhaps he will temper his bouts of self-aggrandising although his first meeting, as president, with the CIA would suggest that experience is already trumping hope: read this report in The New Yorker.

I will not dedicate this dessert to him, not even in jest. But every time I make it I will think of #WomensMarch: the millions of women worldwide who marched in protest last weekend against the new president's flagrant disregard for truth and his incitement to hate, against his comments and policy positions over immigration, Muslims, the disabled and the environment, to name a few.

My friend, Rachel Scherrer, was one of the women who marched through Washington DC. 'RESIST' her banner says. Something we should all feel obliged to do when we confront inequality, the mocking or dismissal of the vulnerable, the abuse of power. Everyone of us is capable of standing up for what's good in the world, for fairness, responsibility and kindness. Small acts. Big acts. They all count. One thing leads to another. Rachel and millions of women cannot be wrong.