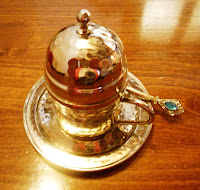 Being home in Wales for a week means eating out at least two or three times with Mam and Dad. We have our favourite casual lunch place - La Memo in Port Talbot - who serve a home-made lasagna you might sell one of your children for, or at least swap them for a day or two of hard labour. It's a family run place and their reputation is built on their fuss-free and friendly service and the reliable quality of their food. And lovely little surprises like this, which arrived after the following conversation: 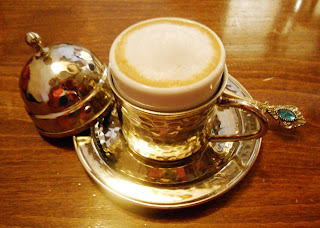 Two other regular lunch haunts, outside of Port Talbot, were less successful. One has been slipping into the arena of dismal failure since its make-over a year ago. When a kitchen's primary function is a grill (as the majority of the rest of the food is, let's be honest, pre-prepared) it's difficult to understand why it should take almost an hour for an order to arrive at the table. 'There've been some kitchen adjustments,' explained the manager, who sidled up to our table like a man anticipating an unscheduled hemorrhoidectomy. Well, perhaps they were adjusting in the wrong direction. Try fast forward.

The second venue had staff problems. 'Three off sick,' one of the waiters said. Which is why, of course, when you ask for a spoon for the side vegetables you're given a teaspoon. 'One pea or two?' And I could have submitted my cheese plate to Time Team: I've never seen a wedge of Camembert that colour, that dry and that cracked.

Fortunately my week at home ended on a culinary high with Sunday dinner at my niece's house: roast chicken and stuffing, roast potatoes, Yorkshire puddings, carrots and sprouting broccoli, followed by Normandy Apple Tart, courtesy of M&S. There are no photos. Plates were cleared with the speed of piranhas. And family get-togethers are always a great source of remembered and shared memories too... and we can't be the only family, can we, whose mealtime stories sometimes have an excremental element?

A family trip to Euro-Disney was flagged up as potentially disastrous when, just as the plane was landing at Charles de Gaulle airport, my great nephew filled his nappy with the force of the whole elephant house at London Zoo.

The men wanted to push on and take advantage of a completely empty immigration area but my sister and niece were adamant. 'This boy is having his nappy changed now!' and they headed for the toilets air-side leaving their husbands looking wistfully at the immigration officers doing no more than a bit of pouce-twiddling. And then less wistfully as the 832 occupants of two jumbo jets from Beijing rushed past them like a human tsunami. An hour later...

Stories that make us laugh or make us cry. The blueprints we make as we go through life.
bad food family La Memo lasagna stories

Magyar said…
__Minimal service; no minimization of costs? I like your -tea spoon- response "one pea or two". Were the peas the same shade as that Camembert_? Smiles! _m
18:00

Lynne Rees said…
Hello Magyar - thanks for spending some time here. We did get a voucher from one restaurant but no reduction at the 'teaspoon' place... but I know them and I feel confident that this was a blip. Not quite a green Camembert... but very yellow! Hope to see you here again.
14:02