The Sprout of Gratitude, The Crumb of Romance and The Gloop of Disappointment

on February 13, 2016
I am not the best patient. I know that. When I'm ill I like to be left alone, for the most part. A bit like a cat: just let me curl up in a corner and heal quietly. I don't snarl or bite though. And I do appreciate, and respond civilly, to regular cups of tea or Lemsips. And the occasional snack. The kind of snack that appeals to a convalescent, someone with a light appetite, something visually tempting. Hot toast with melting butter. Some lightly scrambled eggs with a sprinkling of chives. Even a mug of Heinz tomato soup swirled with a little creme fraiche.

There was an M&S chicken pie in the fridge. Hmmm ... not sure, maybe. But I'd probably eat some lightly cooked vegetables. An hour later, Tony called me. And I really don't want to sound ungrateful. But sprouts? Vigorously boiled sprouts? Sprouts, of any texture, just don't whisper: get better soon. I ate some. They were very soft. That was the only sprout of gratitude I could muster.

Hungry Writing Prompt
Write about the things you are grateful for.


And it's almost Valentine's Day. A day, allegedly, to show (or convince) your loved one how grateful you are to have them in your life. Sometimes your plans unroll like a plush, sandalwood scented carpet. And then they don't. You can read one of my Valentine experiences at this link, published by Women's Memoirs a few years ago. Lots of heat. But the wrong kind.

An article in last weekend's Sunday Times' food supplement explored the 'culinary minefields' surrounding Valentine's Day. The one that made me laugh out loud was:

'Home-cooking: ... Unfortunately the male cook will typically attempt something so ambitious that dinner won't be ready until 10pm. During this process there will be a half-argument about how he is handling the raw chicken. [The big wooden board marked with an 'M' is the one for meat!] By the time it's ready she will be tipsy and already full from eating Kettle Crisps.'

I worry there's a secret camera in my home.

I am going to make a Valentine's cake for Tony, a cake that clearly says, 'I love you to the galaxy MACS0647-JD and back' to a person with a sweet tooth. It's Sweet Paul's Cuatro Leches ['four milks'] Cake. And, even though I'm nowhere near as fond as desserts as Tony, it really does appeal to me too (minus the frosting). Why? The word 'homey' in the description maybe? The pretty photo of a creamy, plump soft-crumbed slice accompanying the recipe? But perhaps it's just the word 'milk', the food that welcomed us into the world. A word we automatically associate with nurture. And here we have milk x 4.

Ramblings of a Demented Baker

Back sooner than I thought. That is one strange recipe... but I'm going to trust Sweet Paul because no one who's first name is Sweet would let me down, would they?

I think my eggs were too big ... after 25 minutes in the oven, when 15 to 20 were recommended, it is still liquidy in the middle when I stick a wooden skewer in. And the rise of it in the dish doesn't look like there'll be any room to pour over the milks.

I am starting to doubt the recipe: do you pour the milk mixture into the cake hot from the oven? Do you leave the cake to cool? Is there enough flour to get a crumb texture? I am tipping through doubt towards failure.

30 minutes in the oven now. Have I used the wrong dish? Ceramic instead of glass? It smells like egg. The eggs were definitely too big.

Where's Mary Berry when you need her? Note to self: do not trust a recipe that has no reviews.

35 minutes. What is most annoying is the potential waste of ingredients, including 5 eggs. The dish of loveless gloop I am imagining.

Yes, the dish, the sides too thick to allow the heat to penetrate to the centre of the cake. At the moment I'm looking at a crisp border and a soft centre - something you might want in a chocolate truffle but not in a cake.

After 45 minutes I'll have to take it out of the oven and hope for the best, or the best of the worst.

It's out. I didn't leave it cool on the grounds that I want this to be over soon! I pricked it all over with a skewer (not in the recipe) but it seemed like a good idea to allow the milks to be absorbed. So much milk too, almost a litre of tinned, fresh and cream. But it all eventually soaked in. It's resting. That's what I should do. And breathe. And wait.

But for how long? 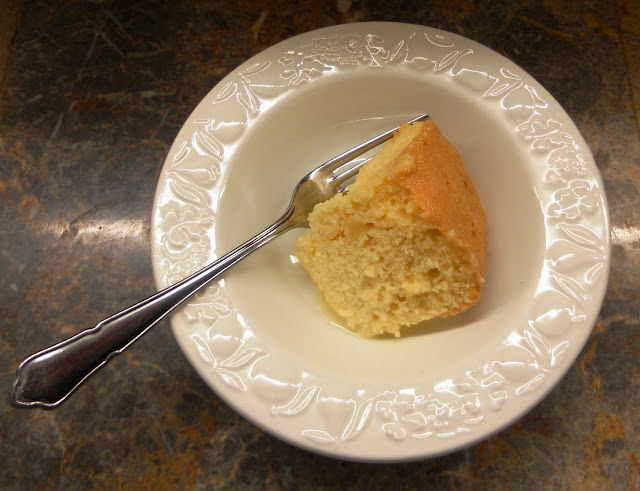 It's like a mixture of Madeira cake and rice pudding. Sweet, soft. And yes, homey. It is a touch too moist towards the centre, but nowhere near the disaster I was anticipating.

Will I make it again? Yes. With smaller eggs. And a thinner dish. And, I hope, less angst.

And Tony says it's definitely a 'I love you to the galaxy MACS0647-JD and back' cake.