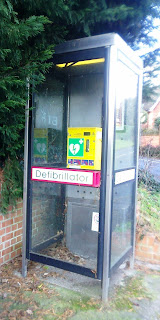 I am hoping that I never ever need to use one of these when I'm out running. This one's in an adopted BT phone box at the top of the hill leading to Addington Village Green, but as I'm tackling the climb up from the A20, past the entrance to West Malling Golf Club, there's something oddly reassuring about knowing it's there! And it seems that any village with a redundant phone box can take steps to change it into a mini-medical centre - read how here.

footsteps heartbeats the breath and measure of my days

Addington, aside from being the name of the village, is also the neighbouring parish to Offham, where I live, although we used to lie within Addington Parish until boundary changes a couple of decades ago. The original rectory to Addington Church is across the lane from me. And the land the houses in our small hamlet are built on was once part of Addington Park, the estate and gardens belonging to the Jacobean manor house, Addington Place. The manor house changed hands at a series of auctions in the 1920s and 1930s, was requisitioned by the Ministry of Defence during World War II and subsequently demolished in 1950 after it had been gutted by fire.

story time the scent of woodsmoke

The road I follow from Addington village green is called Park Road. It was originally just a track but road engineers deepened it in 1828 to construct a carriage road. The fact that the track ran over the top of a Neolithic long barrow evidently didn't hold much interest at the time and the barrow, one of Kent's, if not Britain's, most ancient monuments, remains divided by today's road, with the mounds clearly visible on either side. 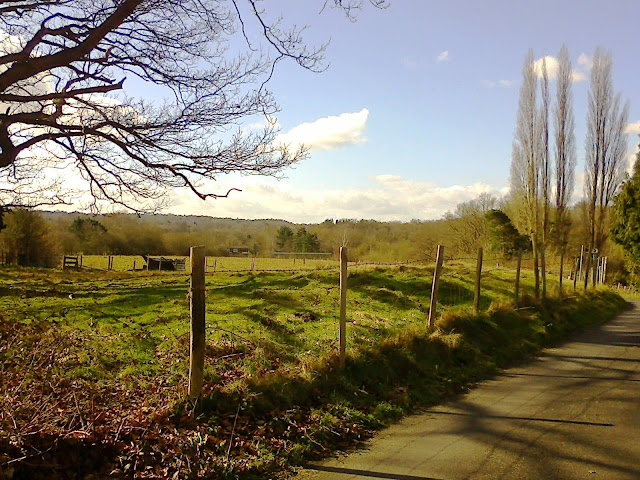 Most of the stones belonging to this megalith - Addington Longbarrow - maybe as many as 50, have been flattened, removed or half-buried. But a 100 yards to the north-west there's another burial chamber: The Chestnuts. Thousands of flints, from the earlier Mesolithic period, have been recovered from this area: scrapers, cutters, chisels, awls, saws and axes. The tools of people living from the land. I held some of these in my hand around 20 years ago, when I was running my bookshop in nearby West Malling, and the landowner, a regular customer, showed me around the sarsen stones (sandstone hardened during the ice age by silica rich sand) that were re-erected during excavations in the early 1960s. And you can still visit them today, by appointment with the owner. 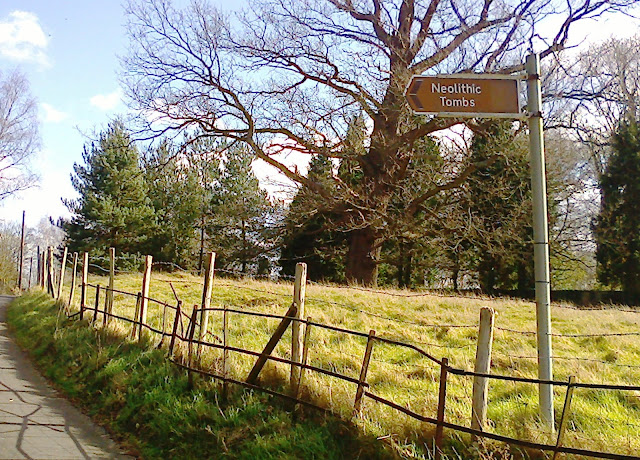 Today, I ran through the middle of the longbarrow, past the gateway towards the standing stones, along Park Road towards St Vincent's Lane flanking the fairways and greens of West Malling Golf Course which spreads across the old mansion house grounds. Then stopped abruptly when I glimpsed the abandoned sandpit through the bare winter hedges. Suddenly history wove itself more tightly for me, random events threaded together and making sense, as I noticed walls of silent stone rising above the void on the other side of the field. 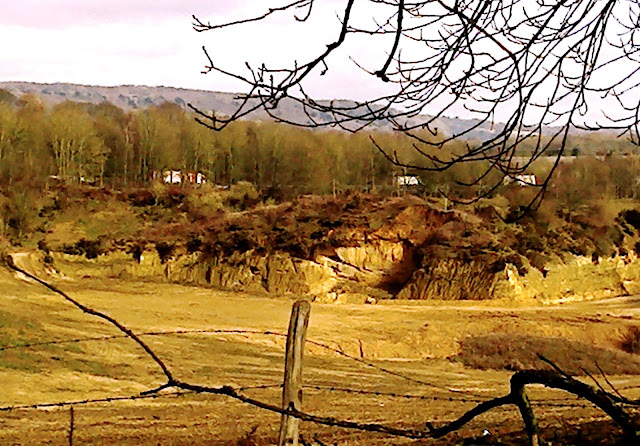 The hum of traffic from the motorway, the occasional golfer's shout, a dog bark, or the changing gears of a local car negotiating the bends in the lane are the only sounds you hear now. But if I stood here long enough, imagined the people who occupied this land so many thousands of years ago, would I hear the patient strike of flint against stone, feel the determination in their work to revere their dead?

reading the past missing letters on my grandmother's grave