With and without striped pyjamas: children who starve 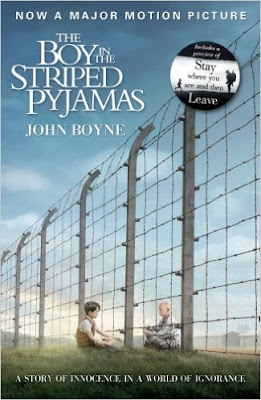 Degrees of sadness and/or joy, yes of course, but I don't think I've ever finished a novel so beautifully written that left me with such a sense of chilling and inevitable hopelessness. When I read the following, towards the conclusion of John Boyne's The Boy in the Striped Pyjamas, I had to stop and remind myself to breathe:

... if I had a pair of striped pyjamas too, then I could come over on a visit and no one would be any the wiser.

The book was first published in 2006 and the film was released in 2008 so I'm sure lots of people are familiar with the story of quirky, nine-year-old Bruno whose family moves from Berlin to a place he pronounces 'Out-with' when his father is appointed camp Commandant  by the 'Fury'.

'There are no monstrosities on the page' a review in Ireland on Sunday said. That's right. There are bright store fronts, fruit and vegetable stalls, cafés that serve frothy drinks, a house with servants and plenty of food: chocolate, bread and cheese, soup, roast lamb, stuffed chicken. '... but the true horror is all the more potent for being implicit.' A high fence with enormous bales of barbed wire tangled in spirals, huts, a skinny and sad boy whose face is almost the colour of grey, his fingers like dying twigs, and people who go on marches and never come back.

'Children’s books are never just for children,' was a Guardian headline last February. It could have been written just for this book.

The novel closes with:

And that's the end of the story about Bruno and his family. Of course, all this happened a long time ago and nothing like that could ever happen again.

Not in this day and age.

Hungry Writing Prompt
Write about something that happened once and you cannot imagine happening again.

And now in the News another war and graphic images of starving children coming out of the besieged Syrian town of Madaya.

What can we do? Whatever it might be, whatever we are able to, we do it in spite of those feelings of hopelessness, even though it can seem like an insignificant healing drop in an enormous ocean of conflict, horror and grief. We do it.

Caroline said…
These stories are gruelling - 'Sophie's Choice' is another. Knowing the subject, I have never been able to read or watch the story. 'If Not Now, When' was a book I read many years ago and loved. Not about life in the camp, but about the resistance. Schindler's Ark/List was another. The Book Thief (book) I LOVED. Every Man Dies Alone is a surprising true story (only translated recently) - I read it last year on the boat. The Reader was compelling too! On a lighter note, The Guernsey Literary and Potato Peel Pie Society is one I'm sure you've read xx

Lynne Rees said…
Oh thanks for a couple of recommendations, Caroline. I haven't read the Levi... but now I've found out the first sentence (In my village there weren't many clocks...) I will have to! And I'll try the Fallada/Every Man Dies Alone too. I re-read The Guernsey L&PPS just a few months ago and enjoyed it more than the first time. I think I'm also going to read through Boyne's children's novels - I do enjoy young protagonists. xx
18:47