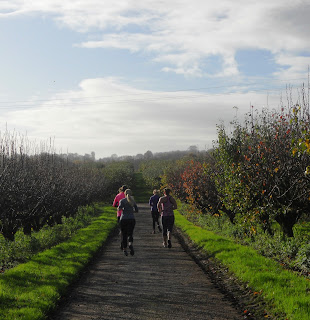 I've been running through them: on Friday morning's off-road run around local orchards with Meopham and Malling Ladies Joggers on a day that forgot it was November, at least for the first couple of hours.

While at home I'm living, breathing, chopping and slicing them. Apple sauce, apple puree, chunky apple pie filling, apple crisps (in the dehydrator), and enough grown-up varieties of apple jelly to get you singing: Golden Whapple (Golden Delicious with whisky), Rumley (yep, Bramleys and rum), Bourpple (you're with me now) and Chapple (with chilli). The Bourpple was more the result of discovering half a bottle of Jim Beam wearing a thick and sticky blanket of dust in the back of a cupboard than any deliberate planning. The Whapple and Chapple are repeats from last year. Rumley is this year's innovation and, as well as Bramleys, also contains the last 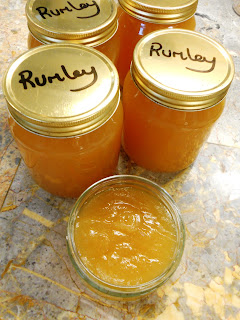 of the Russets from the single tree (out of ten thousand) in our orchard. But Russrumley was too long to write nicely on the lid of the jar.

But despite my apple industriousness I won't even manage a small bite in the fruit remaining in the orchard after the best harvest in the South East of England for a decade. And best here means glut. The money crop, (and the majority of our trees), Cox's Orange Pippins, has all been picked and stored, but the minor crops and pollinators (Bramleys, Golden Delicious and Idareds) were left and, since this weekend's blustery weather, have mostly dropped.

Hungry Writing Prompt
Write about the aftermath of a storm

I feel particularly bad about the Idareds, but not for the right reason. I don't really like them to eat: they're tart, white fleshed and juicy but don't have the depth of flavour that the other apples have. I'm not even that fond of them after they've been baked or stewed.

I feel bad for them because they are the most exquisite fairy tale apple: the apple you want to see glowing like a jewel in the gnarled hand of a bent old woman in a dark forest. They're arty apples: the ones tumbled in a small bowl on the table in a still life canvas, the splash of red in an otherwise muted palette. They're an interior designer's dream in a white room. They are glamorous apples. Apples that turn heads. Even amongst the cleaning and Sunday dinner cooking chaos of my kitchen this morning they are striking a shiny, 'love-me' pose. 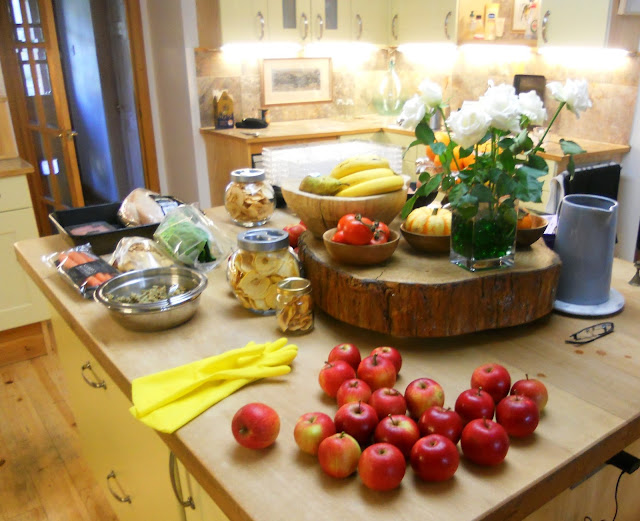 So, I have carefully wrapped around 80 of them in newspaper and stored them in the cellar ... and I will return to them over the next few months and hope they can dilute my prejudice towards them as I attempt some new apple recipes, pink apple sauce among them (if, allegedly, you cook them in their skins then strain). That one dish might be enough to make me love them a little.

Loving is better for us than disliking, I'm sure.
apples jelly love Meopham and Malling Ladies Joggers writing prompt

Anonymous said…
We have had a dreadful harvest from our Bramley's and our russet has not one apple on it. I had promised the large cookers to the postie as he has bought a cider press in exchange for a few bottles. Alas we will have nothing to offer him, on the plus side I have found a wild walnut tree and a couple of cobnut trees, but I shall miss my apples. Do you make commercial juice Lynne? Brenda
16:32

Lynne Rees said…
Hi Brenda - the people who pick our apples make the juice. They have their own very large farm and rent quite a number of smaller orchards in the area too.

What a shame about your Bramleys... if only there was a way to tele-port a box or two your way! Discovering the Russet was a joy - I don't think it has fruited for years... but this year it was a glory.
10:23