How the medicine goes down: rosehip syrup 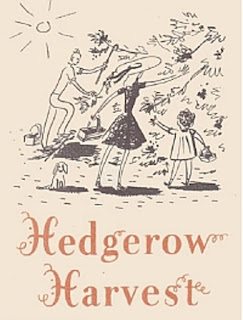 Not like the pucker and shiver engendered by Cod Liver Oil. Oh no, not at all. And much better than the Syrup of Figs which I liked the taste of so much it was almost worth being afflicted by constipation! No, this was a spoonful of sugar that was also the medicine: Rosehip Syrup. Our daily dose of Vitamin C courtesy of the National Health Service in the early 1960s. Sweet, fruity, silky.

In 1943, The Ministry for Food published a wartime leaflet, Hedgerow Harvest, full of recipes for wild fruits, fungi and nuts. Encouraging people to forage might be fashionable now but during World War II, a  time of rationing and limited imports (in 1939 we were importing around 80% of our fruit), it was considered a necessity. Sloes, crab apples, elderberries, cobnuts, mushrooms, rowan berries and rosehips could provide those essential vitamins missing from the nation's diet. The nutritional gift that rosehips offered evidently endured for quite a number of years after the end of the war in 1945 and the end of rationing in 1954. In fact, I was surprised to find that Rosehip Syrup is still widely available today. 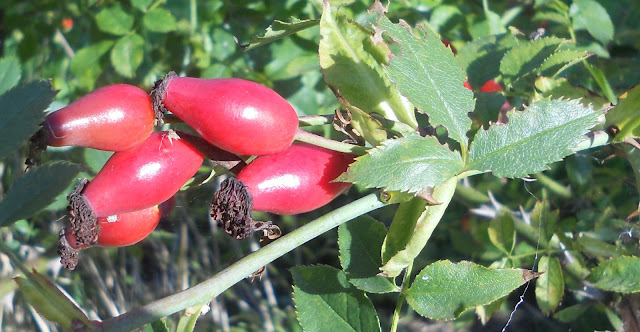 The unstated message behind a teaspoon of Rosehip Syrup was that it was good for me. And rosehips are high in Vitamin C. But I can't help but wonder if its 'goodness' is diluted by the quantity of sugar you need to use to make a syrup: 325gr to 500ml of unsweetened juice. But hey, I've survived to my late 50s with my teeth intact and that's more than can be said for today's kids!

I have two memories of a spoonful of syrup. The first, in the Dew Road clinic on Sandfields Estate, Port Talbot when the nurse checked me for whatever I was there to be checked for. The second, in our kitchen at home: my mother tipping the glass bottle over a spoon, my lips already parting for the sweet, peach coloured fix before she's finished pouring. Sunlight streams through the kitchen window: it is somehow impossible to remember drinking Rosehip Syrup in grey and damp weather. 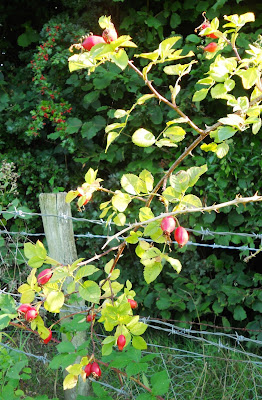 I spotted them growing in two different places in the apple orchard last week: fat and red, and, of course, sunlit. Could they replicate that childhood taste? I had to find out.

The BBC Woman's Hour website gives the original wartime recipe. Hugh Fearnley Whittingstall provides another which is a tad simpler and which I followed, but I added a little more water to the chopped rosehips as it seemed to be evaporating away too quickly during the 'boil it all up' part.

The scent of crushed rosehips boiling is hard to describe. My first thought was hot, damp plum kernels. Now I'm thinking simmering damsons, that sharpness they have at their heart.

And the taste? Yes, of childhood and sunlight. It's unmistakeable.

Hungry writing prompt
Write about a memory of sunlight. 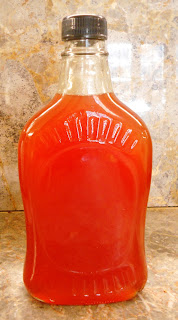 An empty maple syrup bottle I had in the cupboard was the perfect receptacle for my rosehip syrup: it feels like the right shape for my memory, unlike the plain Atkins & Potts bottles that come up on a Google search.

'It's subtle,' Tony said when I gave him a taste while it was still warm.

Yes, subtle, like those gauzy memories I have of it, or, to be more accurate, the memories I have fleshed out with my imagination: a nurse in a crisp white apron, the dust motes that dance in the sunlight streaming in to my mother's kitchen. And what's wrong with that? That's how stories are born.