on June 07, 2015
I am learning it all over again: the delight of picking and eating something you have grown. But perhaps it's not 'all over again', maybe it is for the first time. Dad has kept a vegetable garden since the late 1950s, ever since they moved into the house he and Mam still live in, so as a child I was used to a home-grown harvest of runner beans, broad beans, carrots, cabbage, potatoes, and onions with their tops bent over to help them dry a little while still in the earth before being plaited into strings and wintered in the dark of the redundant coal bunker. But 'delight'? No - I took it for granted. These were the years when most people grew something in their gardens; there was nothing unusual about it. It was part of life, part of feeding yourself.

The year after I moved in with Tony he ploughed up half an acre in a field at the front of his house and planted enough vegetables to feed a small village, if they'd all been famished on exactly the same day. The idea of staggered or succession planting came to him rather too late. The cauliflowers were a particular challenge: quantity wise and for the caterpillar nations they attracted. In the end I stopped searching for the tiniest of ones curled between the florets and trusted that hot water would dissolve them. That trust was sometimes misplaced.

Now we have a greenhouse, built to house experiments with alternative fruit trees and crops we might end up planting in the orchard in place of the apple trees, mostly Cox's Orange Pippin. The Cox has lost a lot of its popularity as an eating apple but fortunately it makes great juice and we've managed to rent out the 20 acres for the last couple of years to a local fruit grower and juice producer and we're hoping that will continue for the limited number of good fruit producing years the trees have left.

Hungry Writing Prompt
Write about what the years ahead of you will contain.

So this year the greenhouse has been commandeered for more domestic crops: Tony has planted cucumbers, tomatoes, courgettes, aubergines, chillies and peppers. And the cucumbers have shot ahead, Mo Farah like, in the quest to be the first to be applauded.

Cucumber and cream cheese wraps. Cucumber and paté on wholemeal toast. Cucumber soup (which was so much better chilled and drunk the next day than eaten warm). So, I'm getting through them. And if summer does arrive, and stay for a few days, I'm going to make this Hungarian cucumber salad, a dish that reminds me of a Robert Carrier recipe I followed while I was living in Jersey in the early 1980s, a side-dish for skewered chicken satay, a memory that has remained dormant until now.

Knowing how complicated Carrier recipes tended to be there must have been more to it than what I remember: peeling the cucumbers, sprinkling them with sugar and salt and leaving them in the fridge for their flavour to deepen. I do remember thinking how exotic it seemed: up until then cucumber had only ever appeared in my life as part of a grated cheddar or tinned pink salmon sandwich. I don't remember who I was cooking for. But there is sunlight in the kitchen, spilling through the window above the fridge and the blue Formica table is laid for four. And there won't be quite enough for all of us to feel satisfied. I have never trusted recipe serving suggestions since.

Soon there will be a fat purple aubergine. Courgettes, now that the flowers have gone limp and their bodies are filling like inflatable bolster cushions. Then tomatoes of all different sizes. A little later: red peppers. Some of the chillies will have to be dried or given away as presents. 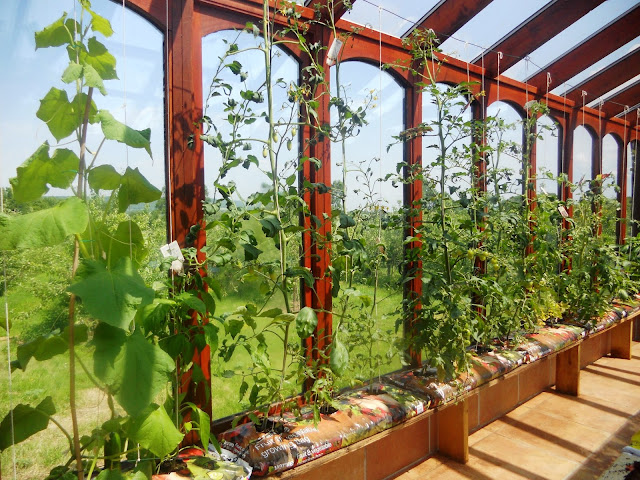 All this green. At first Tony marked the supporting strings with chalk so we could be amazed at how much everything was growing within a day. Now we accept it. But with delight. Both of us are thinking of that first ripe tomato straight from the vine. We're hoping for two.