on June 12, 2015
On the flyleaf of the Everyman anthology, Eat, Drink, and Be Merry, poems about food and drink, it says:

Eating and drinking and the rituals that go with them are at least as important as loving in most people’s lives, yet for every hundred anthologies of poems about love, hardly one is devoted to the pleasures of the table.

And yet without food and drink there would be no love. Literally, on the fundamental levels of survival and the biological impulse to procreate, but food is also bound to our emotional, psychological and intellectual experiences, to our memories, to the people in our lives. The sound-bite 'we are what we eat' transcends our physical compositions: we are what we have been fed, what we have shared with others, what we have offered as sustenance.

I like reading about food in people's stories, novels and poems. Feel bereft, and irritated, when characters meet in restaurants and the writer overlooks the menu completely! Food gives us a sense of who a person is or might be, a sense of place and their relationship to it. 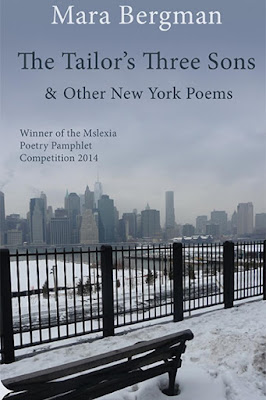 I already have strong sense of who Mara Bergman is. I've known her for over 20 years as a friend, poet and a prolific picture book writer. Last year she won the Mslexia Poetry Pamphlet Competition with a collection of poems that have their origins in New York, the city where she grew up, studied and lived until she settled in England in 1983.

The Tailor's Three Sons & Other New York Poems (Seren Books) is not a collection of poems about food but so many of them bubble with images of sustenance: there are cafés and diners, semolina bread and chicken soup, bakeries and delis, watermelon and clams, donuts and, something I now feel obsessively determined to find and try, baked mozzarella/ like fat balls of fudge.

In the poems where these ingredients appear food becomes the vehicle by which we are invited to explore a city, its history and the poet's personal life. It adds meaning, offers insight and creates appetite for a life that isn't ours, yet a life that still feels intimately familiar. After all, which one of us isn't propelled back to our childhood when we imagine our grandmother's home? And if it isn't the scent of chicken soup that takes us there, it might still be the scents of our own memories: bread, plum jam, or hot chips.

The final poem in the collection, 'Trying to Kill Time at JFK', contains one of my favourite lines in the whole pamphlet. Here, read the poem's opening and arrive at it with a sigh of satisfaction as I did:

I am earlier than I've ever been before, for anything,
breeze through check-in, am free
to wander the concourse of duty-free and places to eat -
Wok 'n' Roll, McDonald's, muffins at Ritazza, sandwiches
at Au Bon Pain, and gallons of coffee, coffee everywhere,
as if caffeine were the secret ingredient of flight.

Good poetry makes us see the world we know in a new light. It illuminates the ordinary, the stuff of everyday we generally walk past and ignore. It's a gift. And each of the 21 poems in this collection shine a light on the familiar and the little or not yet known, from thinking we see a relative in the face of a stranger to the immigrant dreams of the three tailor's sons, in the title poem, who lived and worked in the tenements of New York City.

These poems have fed me. And there's enough to feed you too.