on May 07, 2015
In January I blogged about 'The Year of Eating Everything' and while I started out brimming with enthusiasm and good intentions not to throw any food away I have to be honest and say it's been more 'The Year of Eating Mostly Everything' so far. Damn those little salad bags that turn all seaweedy if you open one and forget about it for a few days.

But this week's experiment might compensate for any previous failings. In fact, I didn't even consider this particular food item as something that should or could be eaten when I wrote that post. You probably wouldn't have either.

No, not worms. Candied orange peel. Made from the peel of some large dessert oranges we've been buying from our local garage's inspirationally stocked Spar Parkfoot supermarket near West Malling, Kent. (It was voted Convenience Retailer of the Year in 2014 as well as Best Independent Store and Best Chilled Retailer.)

However, now I've Googled 'candied orange peel' it appears that the world is already awash with knowledge and recipes... but I am taking a big chunk of satisfaction from the fact that the process I made up as I went along is pretty much identical to the BBC's Good Food recipe here. Except I didn't change the water as instructed in Stage 2 - let's hope there's nothing nutritionally toxic in that oversight!* 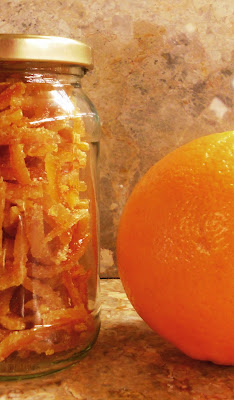 I've yet to try dipping them in chocolate, as this and other on-line recipes suggest, but I might give that a go the next time we have people around for dinner and serve them with coffee. But for now I'm just enjoying their chewy, slightly bitter and crunchy sugariness: they are better than fruit gums, or wine gums, or any other shop bought fruity rubbery sweet.

I'm now inspired to try lemon and lime peel. Grapefruit too. I'm wondering about the subtleties of flavour between clementine and mandarin peel, between common and garden lemons and Meyer lemons.

You know how there are always new songs being written, new musical arrangements that move and astonish us even though there are only 88 keys and 7 octaves on a piano keyboard? How with only 26 letters in the alphabet writers keep on assembling them into words and creating stories we could not have imagined?

I feel like that about my little culinary discoveries sometimes. Small leaps of imagination and curiosity that produce something new, or new to me at least.

Wonder. I guess that's what we all must have and pursue. It brings light to our lives.

* Tipping away that first batch of water removes some of the bitterness from the peel. And the end result is definitely better. Why don't recipes tell you stuff like this?!
candied orange peel orange sweets writing prompt