Beware of the Cat(s) and other stories

Moglet, Tussie, Chloe, Styx and Cocoa. The cats I have lived with. But only one of them ever attacked a human, although that was less of an attack and more of a mistaken (by the cat) invitation. Cocoa, a chocolate brown Burmese, used to jump from the floor onto your shoulder if you patted just above your heart but, from a cat's point of view, there's no perceptible difference between a deliberate pat and unconsciously brushing some lint off the front of a shirt. And 12lbs of sleek, dark muscle (apparently) launching itself at your jugular is enough to make the biggest man flap and squeal. As you might imagine, the women in the room literally cried with laughter. Were still laughing the next morning. In fact I'm laughing now, years later, as I type this paragraph.

But mock attacks aside it's true that you can't really depend on cats to behave in a predictable way. They can be fickle, independent, fussy and dismissive. But that's what I love about them. I know dog-lovers champion the loyalty and companionship of their mutty friends but the idea of something, or someone, being uber-dependent on me fills me with dread. You can probably understand now why I never had children!

When I moved into Tony's house in 1985 he had two semi-wild black and white cats, Tussie, a male, and Chloe, his sister. He allowed them to sleep in a basket in the kitchen during the day but at night they were put outside. Within three months they were using the newly installed cat-flap and sitting on my lap.

A couple of years earlier there'd been three cats; another female called Tabby. All three of them fell asleep on the back of a hay lorry parked at the house but when the driver pulled away at the end of the day Chloe woke up and jumped off the back before he reached the end of the drive. Tussie and Tabby must have been too frightened to move. The driver later told Tony that he saw two cats jump off the back when he stopped at a garage a couple of miles away, on the other side of of two major roads, the A20 and the M20, but Tony never found them when he walked around the area calling their names. 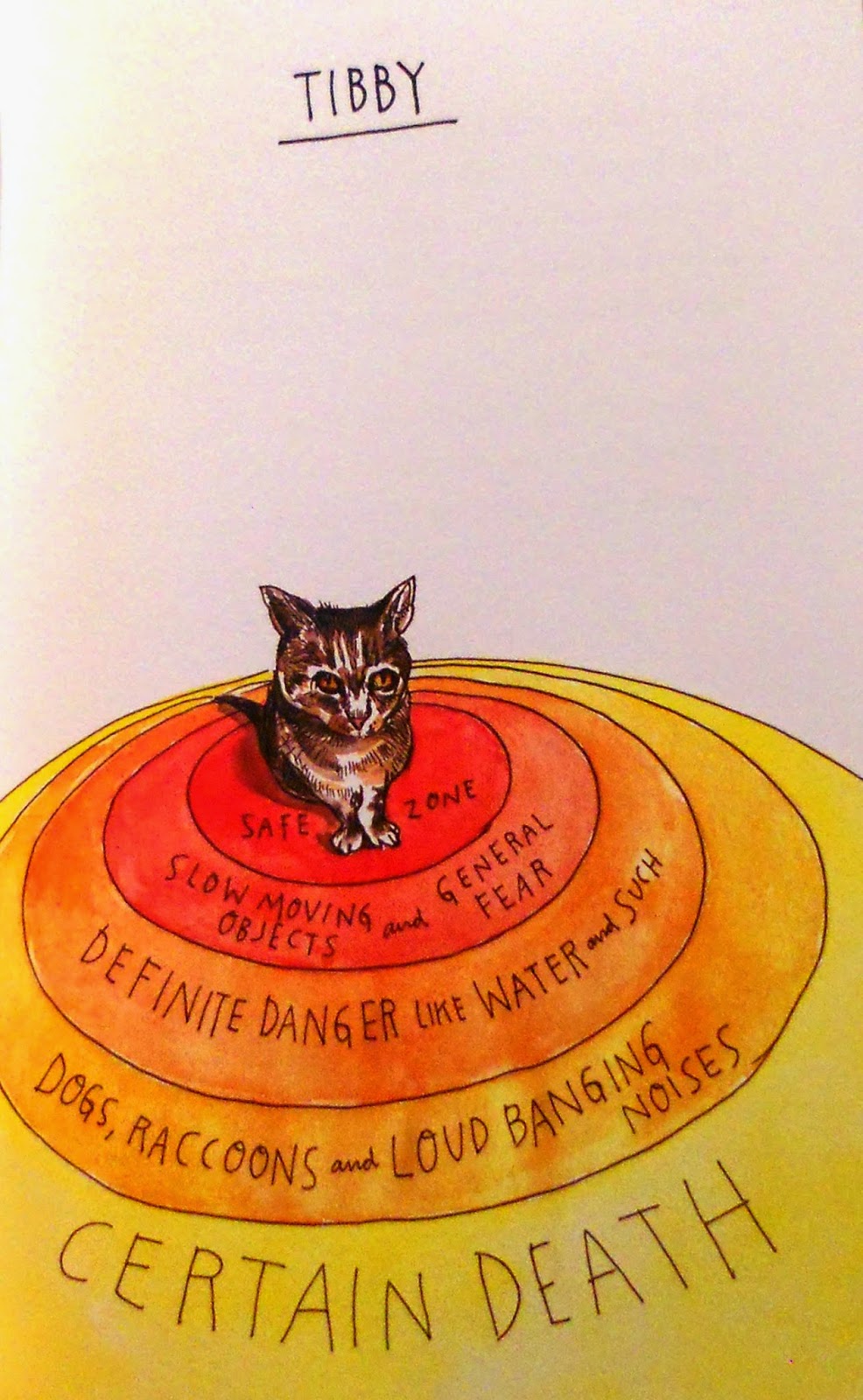 Six months later, as Tony was leaving the house one morning, Tussie walked up the drive, crying for food. He was thin and his coat told a story of rough living but Chloe had no sympathy. It was a couple of weeks before she stopped hissing at him. Tabby never came back.

I'm reminded of this story because I've just read Lost Cat, A True Story of Love, Desperation, and GPS Technology, by Caroline Paul with beguiling illustrations by her partner, Wendy McNaughton. If you're not a cat lover I can categorically say (see what I did there?) that you won't be a fan. But if you're one of the world's cat-adoring people you will read it in one sitting (as I did) and want to leaf through the pages of illustrations again and again.

The prose is dressed in that deceptive simplicity that all writers know is twistingly difficult to achieve. And it's beautiful too. And sad, funny, philosophical and pragmatic.

The two cats in the book, Tibby and Fibby, reminded me of Tussie and Chloe: one outgoing, the other a shivering bag of fur and bones convinced the slathering jaws of the universe were waiting for her outside the back door. Tussie was the affectionate one as this drawing of Tony's from 1989 illustrates. 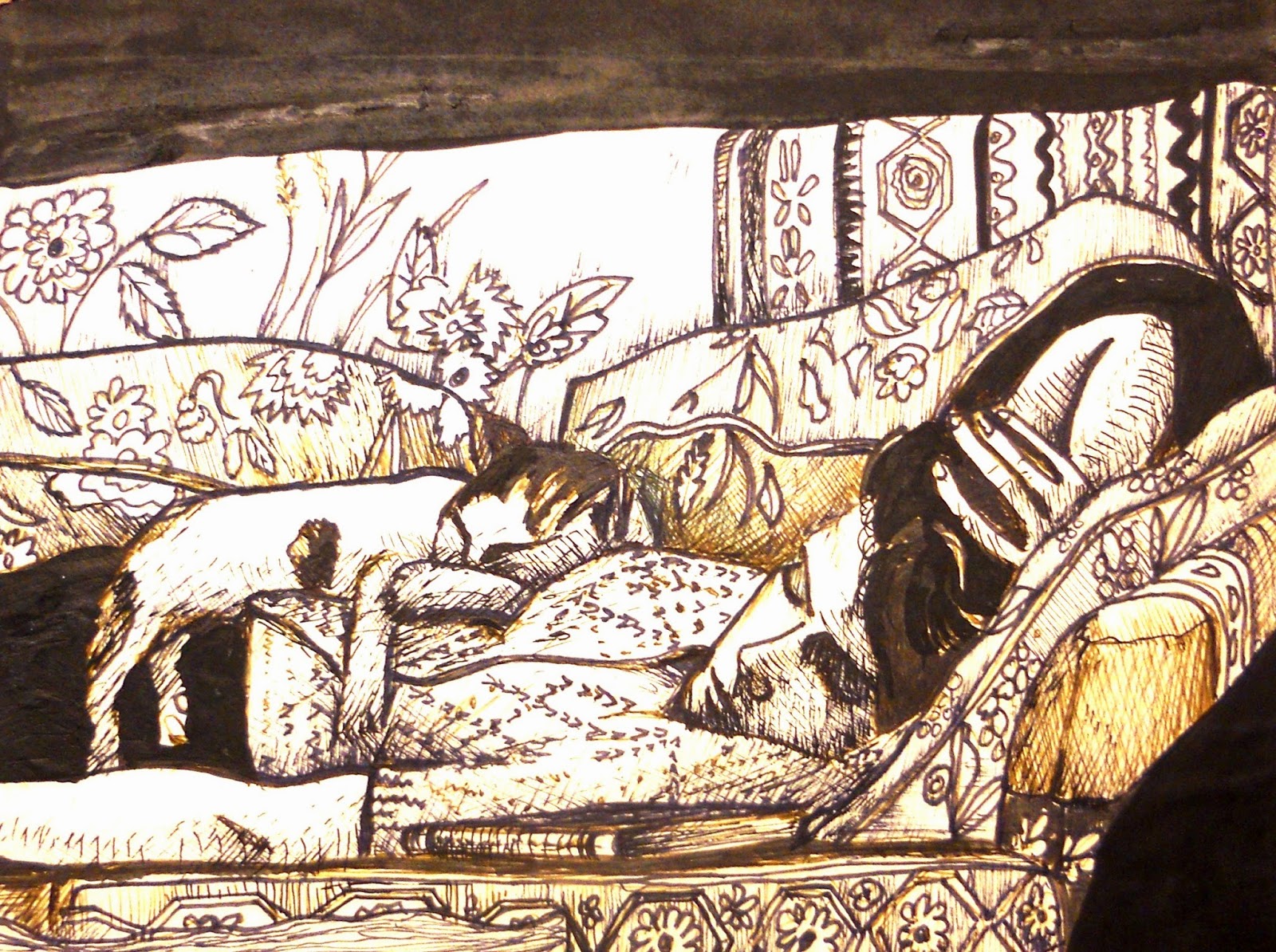 When I turn the drawing over I find what I'd forgotten about: 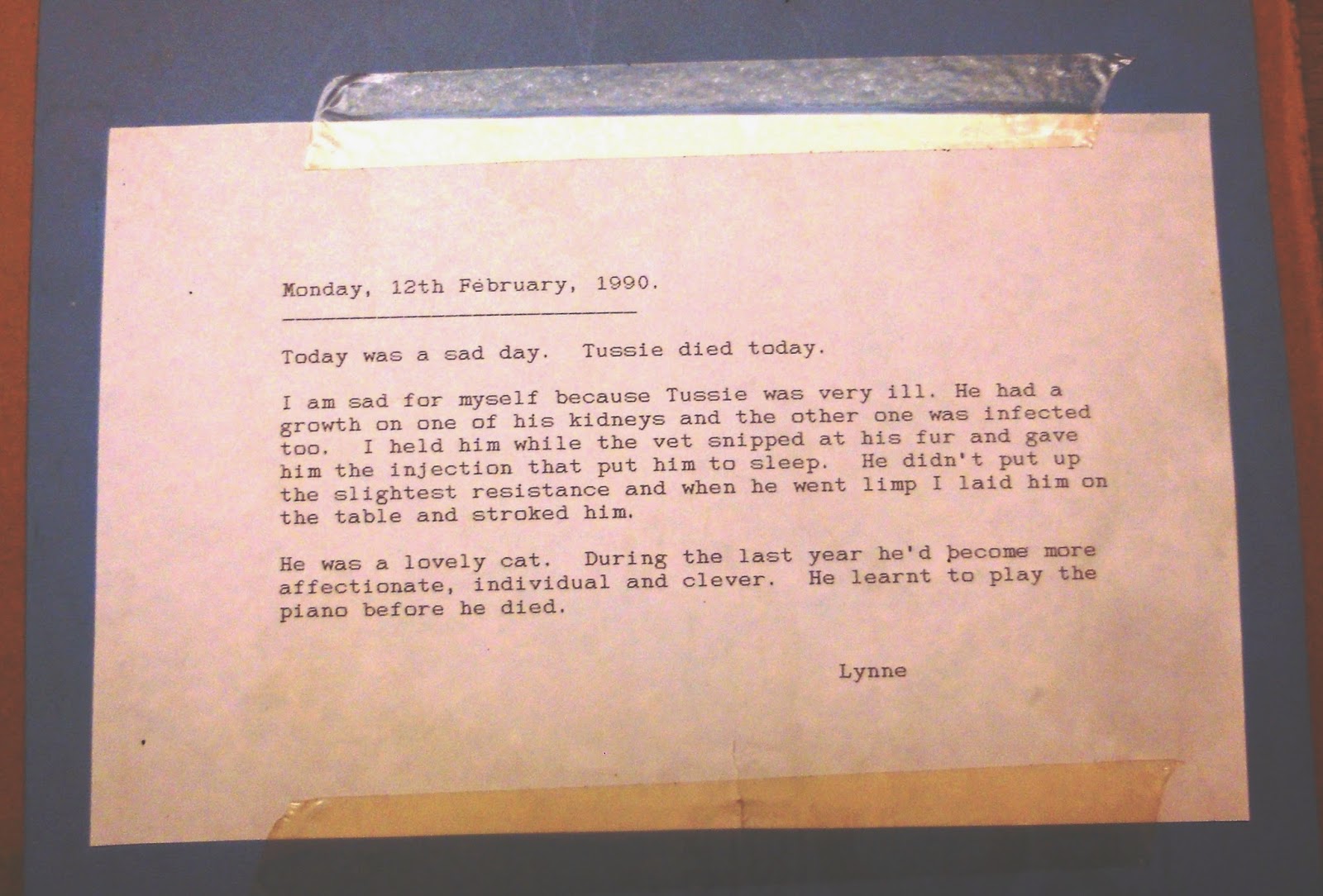 12th February, 1990. Almost 25 years to the day. I'd only recently started writing but I'm pleased I already understood that emotion is better expressed in a plain fashion.

After Tussie died, Chloe seemed to undergo an instant personality transplant: suddenly she was walking into a living room full of strangers and jumping onto the sofa next to one. Cats are complex, often un-knowable, creatures, as Caroline Paul discovers in Lost Cat.

And because I'm committed to some kind of food reference in every blog-post here's the current feline presence in our lives eyeing up the canard when we were still living in France. Chica drove back with us in November 2011, from Antibes to Calais, through the tunnel to Kent, from Folkestone to Offham. More than 12 hours and 750 miles. Stoic. Not a single mewl. She swapped palm trees and lizards for apple trees and voles. But she still likes the smell of red wine and positions herself as close to any cheese plate as she possibly can. And she takes her duck à point. 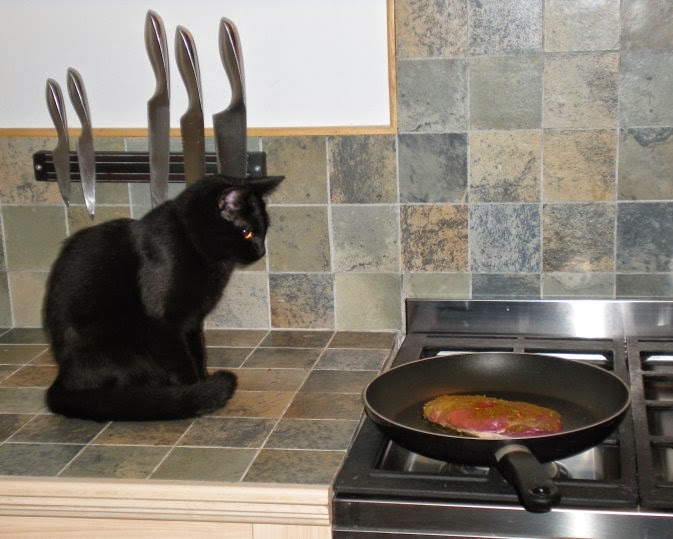 Ha-ha! That last picture of Chica looking at the duck breast is CLASSIC! xx

I know! If I'm eating cheese or salami she'll whack my hand until I give her some!

The night Toosie played the piano I thought we had burglars in the lounge (in the cottage) but then thought that's not what burglars would do really! We'd locked him in there and I guess he decided to walk across the keys to wake us up! They were a couple of characters. x