All the threes: The Poet at Matfield

on February 03, 2015
The expectation around the number three did not escape us yesterday, along with the fact that we only had two of them: the date - 3rd February - and the three decades that Tony and I have been together since meeting at The Old Courthouse in Jersey on 3rd February 1985. All the threes - Dirty knees - All the feathers - Two little fleas. We needed three little fleas. Or at least I thought we did.

we met put us in possession
of two and we needed one more
for a trilogy? But I was wrong.

We have always been
in the company of three:
me, you and the ‘we’

we have made and remade
through these years, much
greater than either of us alone. 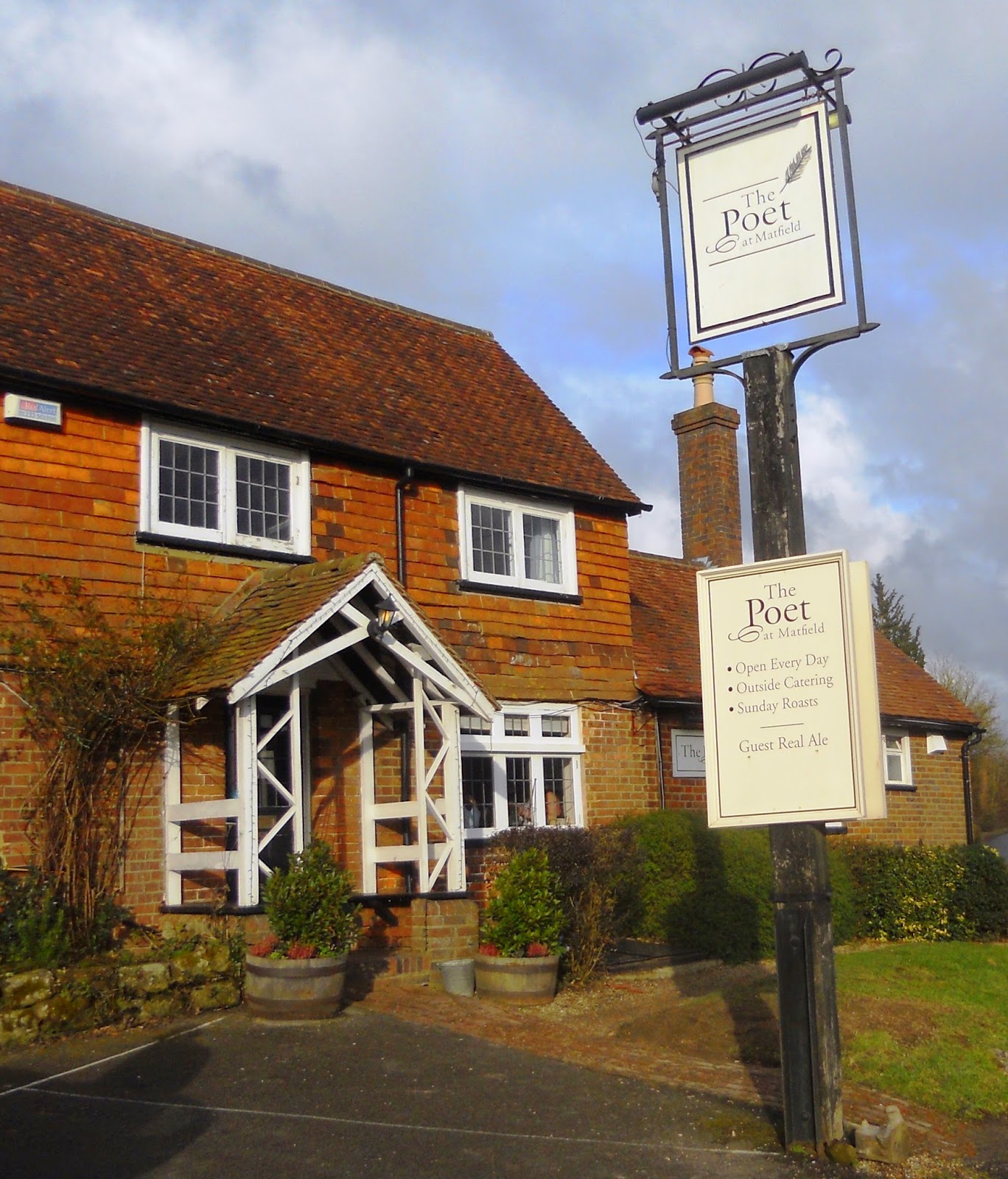 And we did spend three hours at The Poet at Matfield. And we did have three wonderful courses. But I only had one glass of wine because three glasses would have had me snoring face down in my Sticky Toffee Pudding.

The Poet is named for Siegfried Sassoon (d.1967) who was born in Matfield in 1886, the second of three sons. There's that number again. And there's more.

Sassoon is generally thought of as a First World War poet, along with Rupert Brooke, Wilfred Owen and Robert Graves, but he also wrote the acclaimed fictionalised autobiographies known as The Sherston Trilogy: - Memoirs of a Foxhunting Man (1928), Memoirs of an Infantry Officer (1930) and Sherston's Progress (1936). Although he later published three volumes of pure autobiography:The Old Century (1938), The Weald of Youth (1942) and Siegfried's Journey (1945).

Sassoon had a series of love affairs with men, including the actor Ivor Novello, but in 1933 (Two Little Fleas) he married the young Hester Gatty with whom he had a son. And I'll stop there.

There's something satisfying in making these patterns from the marginalia of lives, including our own. Picking and choosing the dates and ages that suit our aims and purposes. And maybe it's some kind of mathematical satisfaction that encourages us to make more of a fuss about those birthdays and anniversaries that fall at the close of decades. They feel substantial, complete, accomplished.

Although if we really want to get fancy-pants mathematical about things then maybe we should be celebrating events that fall on prime numbers. So things are looking good: Tony's 71 this year. We'll have our 31st anniversary next year. And... there's that urge to complete a trilogy again!

Oh let's eat instead! Enjoy my three courses at The Poet. Then go there and enjoy your own.

Caroline said…
I feel so hungry now! An ability to see patterns in things is fundamental to being a thinking poet - me thinks xx
18:53

Lynne Rees said…
It is such a great pub/restaurant - very informal but with exquisite food. Maybe seeing patterns is a way of making sense of the world too, seeing meaning. And order too, perhaps. x
23:46

Unknown said…
I count cars at traffic lights close to my abode..so I know if im far from 'red' if I'll make it next time. I count the stairs on the escalator at tube stations. ..I count seconds between tube stops sometimes...I count in my job! I count minutes before I fall asleep. ..I count grey hairs...I count my bank balance..I count my son's school homework chart. ..I count pounds I loose in weight OR put on! I count! How do I manage everything else ...count drac in puppet show..."I love to count..hahaha" . X patterns
21:55