Hungry for more in West Wales

I've been in West Wales following in the imagined footsteps of some of my great grandmothers who were born and lived here in the 18th and 19th centuries, walking the lanes and hills between the farms they worked and the churches they were married in, where they buried some of their children.

I'm yet to find a map of mid 18th century Carmarthenshire so I can't be sure of the route Anne Protheroe, my 5 x great-grandmother, took from her father's farm at Bron y Gaer, in the parish of Meidrim, to her new husband's farm, Plas Issa, in the neighbouring, and southern, parish of Llangynog. I am sure that some of the lanes might still wind around the same bends, skirt similar if not exact hedgerows, although the 19th century arrival of the railway and the main Carmarthen to St Clears road, the A40(T), have irrevocably changed the landscape since that day she was married in February 1769.

Did she walk or travel in a cart? Did she take more than her clothes, her personal possessions? Did her father gift her a cow, some chickens, a horse, a sheep? From the few traces of births, deaths and marriages in the parish records I've assembled a family portrait, glued together with some educated guesses, that shows her mother already dead, a few days after giving birth to a baby girl in 1752, an elder sister already married, and the baby long dead too, buried in 1756. Did she carry something of her mother's? I'd like to think she did, a prayer book, a piece of lace, something of her that she could take into her own life as a soon to be mother.

At Bron y Gaer there's an old stone building still standing, used as a storehouse and barn, next to a much later build with a bright cream render. Could this be the original farmhouse, its outside steps leading to living accommodation on the first floor over the animals? Or do I just want this to be the case, to be able to touch the stone her hands would have brushed? As if my skin might absorb some of her story.

I stayed at Sarnau Mansion, a peaceful and welcoming gem of a Georgian country house, then drove to the Fox & Hounds Inn at nearby Bancyfelin for my circular walk to Bron y Gaer. A half pint of Guinness there at midday was my reward for a two and half hour trek and, with hindsight, I probably should have remained for lunch (the pan fried salmon with fresh mint was calling my name from the specials blackboard) and ignored the salty crumbs and greasy smudge or two on the coffee table in the bar where I'd installed myself. But it was early. I'd only cleared a plate of double fried egg on hot buttered toast at 8.30 and I was bound to find somewhere else relatively close-by, wasn't I? Um, no.

Do not believe those big blue tankards on Ordnance Survey maps that promise food and drink. The one stamped on the outskirts of Llangynog is the sad and bitter ruin of The Wern Inn. The more promising signs I kept seeing for The Farmer's Arms at Llanybri eventually led me to a fractured conversation through a window with two Thai women. It was closed. They opened at 4. But no food was served on Mondays. And then I found Florrie's at the beach in Llansteffan.

Oh bliss. And to make things even more blissful there was tea and coffee and walnut cake at the nearby beach shop and tea room. I swear I have never tasted cake so light. Angel fingers at work there. Or angel food-processors. 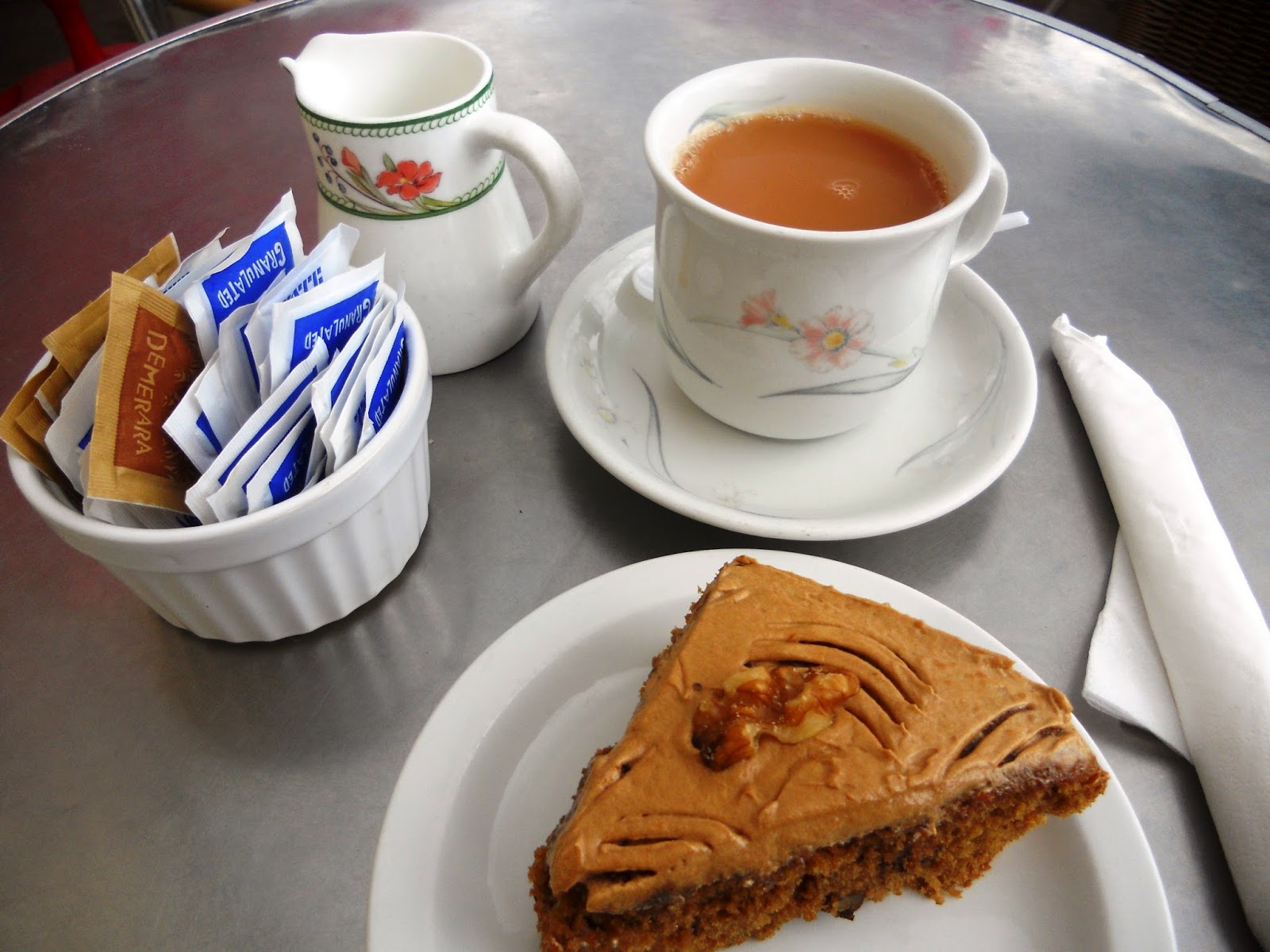 Anne Protheroe's granddaughter, Anna Morris, my 3 x great grandmother born in 1811, moved here to Llansteffan with her second husband, Jacob, around 1878. Her first husband, Samuel, had died in 1847 leaving her with a farm to work and seven children. She remarried within the year.

I do not know yet what brought her here, what propelled her to change her life so dramatically at the age of 67, to leave the farm she'd lived and worked on for 46 years. Perhaps they had to give it up and Jacob, who was at least 15 years younger than her, found work here. In the 1881 census he's listed as a Road Contractor, a sign of the industrial changes taking place in 19th century Wales.

I imagine her standing in this same spot, looking over the estuary, the novelty of a tide, seagulls, so different from the enclosures of hills and fields she's been used to, less than 12 miles away by road but hours away by cart and a country away in landscape. She turns her back on the coast and walks home to Bull House where her two unmarried daughters, one from each husband, will be wondering what's become of her. And what will become of them, she thinks. Unlikely to find husbands at their ages now, and in this new town too. But if there's one thing she's learned in life it's never to think you know what the future might bring.

Hungry Writing Prompt
Write about moving to a new town.

Norman Darlington said…
That was a lovely rollick of a read! Food in the hand is worth two blue tankards on the map but all was right in the end.
67 sounds a very late age for Anna Morris to be moving, unless it was just down the road. What does Plas Issa mean? Google Translate is no help at all :)
22:38

Lynne Rees said…
Thanks, Norman. Anna is a woman I really do want to write about - her 2nd husband was about 17 years younger than her (20 to her 37 when they married in 1848). Llansteffan's not far by today's standards - 11 miles/25 mins in the car - but they left a farmlife to rent a big village house (with two grown daughters who remained living with them). He then worked as a 'road carrier'. Plas Issa is Plas Isaf - Lower Place (or Farm), although plas is also mansion or hall, as in big country houses. Lots of 'isafs' and 'uchafs' (Upper) in farm names in Welsh.
08:30