The Welsh poet, WH Davies, captured a simple truth with the opening lines of his 'Leisure' poem:

What is this life if, full of care,
We have no time to stand and stare.

Simple, and easy to remember too. So how come I need to remind myself of it over and over again? I'm probably not alone.

Recently I stood and stared here:


Malling Abbey is only about two miles from my doorstep, in West Malling in Kent, South East England. It's been home to the same closed order of Anglican Benedictine nuns since 1916, but in historical terms that's cake crumbs: the first recorded mention of a community on this site is 946. Although credit goes to the 'builder' Bishop Gundulf for its development and foundation between 1090 and 1150, one of the first post-Conquest monasteries for women.

The wheelbarrow rest-stop in the above photo is the back of the Norman tower. Gundulf's church once enclosed this area but only one of the nave's walls remain, though the play of sunlight on old stone, the lime tree's shadows and the poetic resonance of wheelbarrows all work at making this a sacred enough space for me.

The current Mother Abbess has been living here for 44 years. She is knowledgeable about the Abbey's history from its foundation, through Henry VIII's dissolution and subsequent centuries of private possession, right up until a 19th century benefactress, Charlotte Boyd, driven by a vision to restore monastic lands, bought the property in 1892 for £10,000 and invited an order of Benedictine nuns to return.

She revisions the dissolution of the monasteries for us: it wasn't just about his argument with the Catholic church, Henry had wars to fight and he needed money. She asks us to consider the fate of the disenfranchised nuns in a patriarchal society: the monks could become parish priests, bishops even, but what became of the women? And reminds us of Shakespeare's 'the bare ruined choirs where late the sweet birds sung’ from Sonnet LXXIII, words that conjure up the abandoned ruins.

The dedication of a life to prayer, to seclusion and restriction, seems anachronistic in the 21st century. I can more easily understand religious communities that work with people in need to limit deprivation, or who look after the sick and injured, or offer spiritual comfort to the terminally ill. Does individual and/or corporate solitude, silence and prayer help the wider world? The nuns evidently believe that it does. And the community isn't as isolated as it once was. The Abbey offers public tours on Heritage and Open days and they also have a guest house for private retreats; the level of involvement in their religious services is down to personal choice.

Lauds. Terce. Sext. None. Vespers. Morning, mid-morning, midday, mid-afternoon and evening prayer. These are listed in the Guest chapel's prayer book though the nuns also pray at Matins and Compline. I'd like to believe that their fellowship and their personal prayer is making a difference, however slight. I do believe that silence and solitude are good for all of us from time to time, moments in which we stand still and notice the world, our relationship with it. We've come back to where we started: WH Davies' standing and staring.

At the end of my Abbey tour - which included its gatehouse and restored almonary chapel, the medieval transept and cloisters, the nuns' library and the 1960's 'concrete technology' church that is surprisingly beautiful in its starkness - there was tea and cakes in a small building near the nuns' extensive vegetable gardens where rows of Cara potatoes are flourishing.

'Cara' means beloved in Latin. It's the root for names like Cherie, Cheryl, Kara and Carys. In Welsh 'cariad' means beloved too. Maybe it's not silence or solitude or prayer that makes a difference, but the quality of love that's present in these actions. Love practised, given and received. 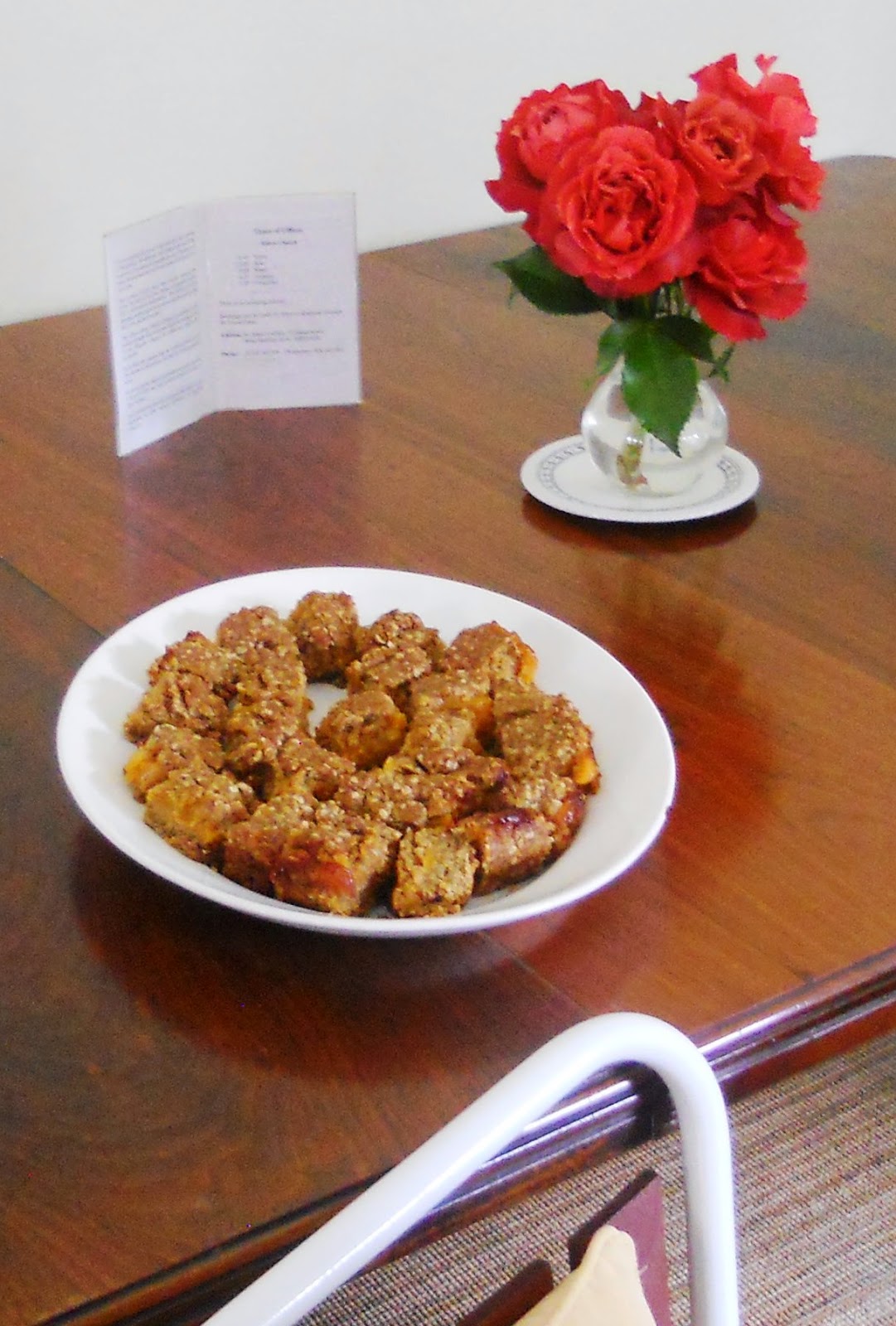 When my Grampa Rees really enjoyed something his wife had cooked he used to say to her, 'There's some love in this, Get.' There was some love in the apricot flapjacks served with my tea: sweet toasty oatmeal sandwiching a layer of soft fruit. I thought I'd email the Abbess and ask if I could have the recipe. But there's no email address on their website. I could phone. But there's no phone number either. There's a postal address: I'll need to write a note, slip it into an envelope, add a stamp, take it to the postbox at the corner of my lane. And wait. How anachronistic. How perfectly appropriate.

Write about doing something slowly.

How can you be hungry to work , you might say,
If you're a Stonemason, definitely every day,
Ive worked on Churches, Bridges, Castles too,
Licked my lips when Ive seen it through,
Stood back and admired,
Never mind how much I perspired,
Buildings today are fast and furious,
No heart very spurious,
Father and son , built those pleasures,
I'm privileged to restore the treasures
Writing this is making my tummy ache
Eager to use my, Pitcher and make
Natural buildings, not plaster,
Then they will last forever after.

Best yet, hungry writer. And that's saying something. And cara is Irish for friend.

I really must check this blog regularly.

Thanks so much for posting your poem - you're so right. Buildings a 1000 years old are outlasting some 20th century ones.

Thank you, Norman. How lovely that cara means friend too.

Hi DL - a pleasure to have you here whenever you can stop by.

Your question about giving a life to prayer made me think of collective consciousness. Some people believe it has a scientific credibility. This interests me. Do let us know if they send you the recipe! x

I sent my letter today, and enclosed a copy of the blogpost too. I'll let you know! x

hills of windmills
going slowly 'round
Tai-chi in the park

Hi Garry - thanks so much for posting your haiku. I did Tai Chi for the first time a couple of months ago... in a room full of people there was such an astonishing stillness.

Thanks Lynn.Just reread it and think it might need some rewording. Hard to imagine those hills going round. Anyway. . .
Tai-chi takes some getting used to, for sure. I did it singly for awhile many years ago, and found it had some fascinating effects, more on my psyche than my physique. But I eventually gave it up for my more favoured form of recreation, sitting still with a beer in my hand.
Enjoying your blog!