An edible BFG. And big, blowsy and irresistible Tom Wolfe.

on January 14, 2014
BFG has always been Roald Dahl for me: The Big Friendly Giant. Here in south Florida it's another thing entirely: a chain of restaurants called Bonefish Grill. But I never complain when there's food involved. And neither do their customers if the majority of reviews are anything to go by. But apart from seafood all-ways, a whole net of fresh fish seared, baked and farcie-d, as well as Kobe and US beef, and serving staff that are professional and funny and courteous (Gina with the red hair: you rock) it was something on their dessert menu that made the meal unforgettably different for me.

And this is for all you non-dessert eaters who'd still like a little something sweet and tantalising after dinner: the Espresso Martini made from Svedka Vanilla Vodka, Kahlua, crème de cacao and espresso and served in a glass whose rim is encrusted with chipped cane sugar and chocolate.

The only complaint I do have is that the (enjoyably) dim light in the restaurant made it almost impossible for me to get a good photo with my little digital camera. I guess you're just going to have to take my word for it. Or try BFG yourself. Unfortunately the UK is yet to see them open within its shores.

The other treat of holidaying here is the proximity of big book stores: namely Barnes & Noble now that Borders has fallen off the map of the world. And because I always try and read a novel related to the place I'm staying in I picked up a remaindered copy of Tom Wolfe's Back to Blood, a larger than life, roller-coastering, ironic and cynical take on Miami's elite, its immigrant population, its posturing and its unforgiving heat.

The New Yorker was equally unforgiving in its review when the book was first published in 2012. (Reviews on Amazon tend to be more positive.)

But I enjoyed it: enjoyed the exaggerated, almost caricatured, main protagonists, the 'in your face' style of some the prose, how the narrative jumped between the multiple points of view and led me from irritation to empathy for the Cuban-American cop who finds himself unable to please anyone, his family and neighbours, and the police force, after he rescues/arrests (depending on your political stance) a Cuban refugee from the top of an 80 foot mast. 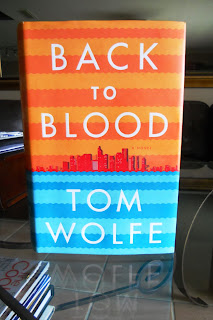 Hungry Writing Prompt
Write about what identifies you as you.
Who are you?

The exaggeration that Wolfe employs probably means that it's not an accurate reflection of Miami. But it's still a reflection, a glint of how the city works politically and racially. The book-jacket states that Miami is the only city in the world where people from a different country, with a different language and a different culture have taken over at the ballot box. Wiki calls it a multicultural mosaic.

And it is exciting. Intimidating too. Unnerving and enervating. And a damn side warmer than anywhere in the UK right now! And now, if you'll excuse me, happy hour at BFG is calling: half price appetisers. And I'm told that the Bang Bang shrimp are not to be missed.