Having a laugh. And lunch.

He gave me the post code, saw me putting it into the sat nav, so the third time he asks, Are you sure this is the right way?, I feel like poking him. Instead I say, firmly, You do it then! To be fair to him, the posh woman in the machine does seem to be sending us the very long way round. But at least it's a scenic route: the back lanes of mid Kent on an autumn day bright with blue skies are worth any detour. And as we appear to be heading more or less in the right direction I'm happy to take things slowly. But as we follow instructions to turn left into yet another narrow high-hedged lane Tony's resolve crumbles and he decides to ask for directions.

There are rules governing the asking of directions. Don't do it in city centres after 7pm: you'll inevitably get the drunk. Don't ask people at bus-stops: they're there because they don't know the way to anywhere independently. If you ask someone and they say, Pardon?, just drive off: they're playing for time, politely, and the next time you repeat the address they'll tell you they're not from around here. What? You didn't know that when I first stopped?!

I've now added another rule, one that was rapidly formulating in my mind as Tony slowed down alongside a half hidden driveway where an old man was leaning on a rake. Tony, no... But it was too late.

As soon as we came to a stop he shifted his weight from the rake onto our wing mirror so now we were stuck there or we were going to have to take the old bugger with as as we drove off. Ah, Kingswood, he said and nodded and then left a pause long enough that we were both tempted to poke him to see if he was still alive. But what if we poked him and he fell off the wing mirror?

I left Tony to deal with the matter, and stared out of the passenger window, my shoulders, by this time, rocking with silent laughter as the old boy tried to remember what was at the end of the lane. 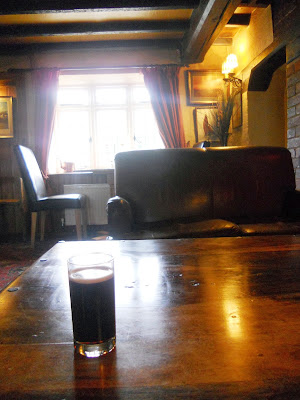 He probably hasn't spoken to anyone since the end of WWII, Tony said after we eventually escaped and I was wiping the tears from my eyes. And then the sat nav instructed us to turn into Gravelly Bottom Road. You're having a laugh, aren't you? Tony said to no-one in particular. By the time we'd passed Bushy Grove we were a pair of basket cases. Sometimes living in England is entirely worth while!

And we got a great lunch out of the day too. The Pepperbox Inn near Harrietsham lives up to all and any expectations of what an English pub should be like: 15th century, whitewashed, a roaring fire, cosy leather sofas and dark wooden furniture with the worn gleam of centuries and the obligatory lollopy dog asleep on the floor next to the bar.

And the food was a winner too. I had an Asian scotch egg with salad and chips, the sausage meat singing with flavours of chilli, garlic and cumin. But I could have chosen a good half a dozen other things and been equally as happy, I'm sure. 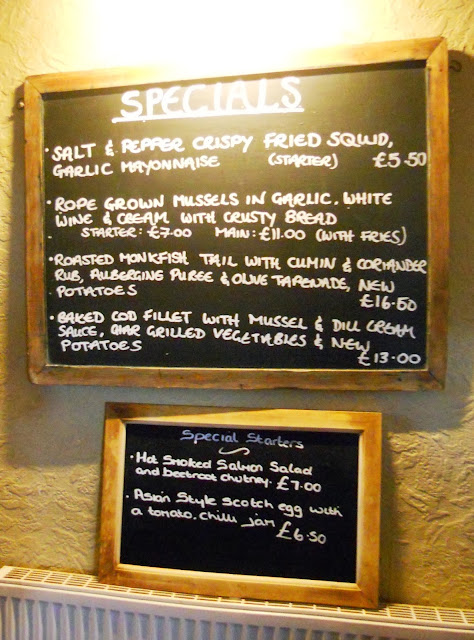 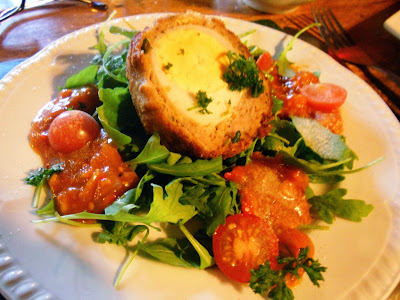 And there was a windowsill I wanted to take home with me. 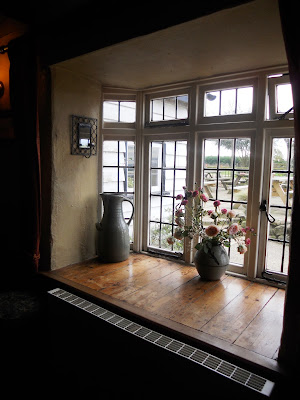 Or at least spend a weekend in with a pile of soft cushions and a couple of books.

Is there anything better than a good laugh and a good lunch within minutes of each other? Not that I can think of right now.

Hungry Writing Prompt
Write about stopping at the side of a road.

Sounds like a wonderful day! Just one thing about that menu - "new potatoes" - in November??!