Flat and flatter: cars and ducks

on October 16, 2013
(Please don't worry - there's no direct relationship between the car and the duck!)

There's a flatness to grey, wet weather, don't you think? Everything might be exactly how it was yesterday, every building, every tree, even the colour of the grass, but when I look out of the window it feels pressed upon, weighted down. It's like the sound an old bruise might make. The smell of a damp towel.

And just when you think things can't get any flatter: 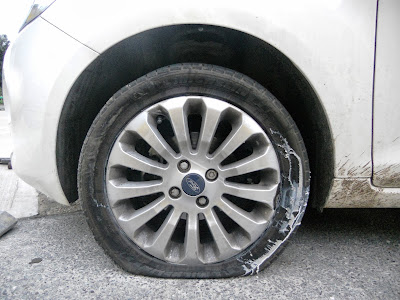 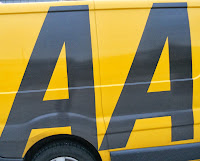 But I called a very nice man. A very, very nice man. In fact, in the handful of times I've had to use a breakdown service I've never met an un-nice man. It's not just that they solved the problems: changed a tyre, refilled an empty fuel tank, or took me home. It's the manner in which they handled all that. They're like magicians: they make anxiety disappear. But that is coming from a woman who generally doesn't look under the bonnet of her car; a woman who has been meaning to get out the owner's manual for the past five and a half months, to find out how to change the clock forward an hour, and who realises it's not really worth it now. In two weeks time she'll only have to change it back.

Flatness needs a non-flat antidote. And this was mine: 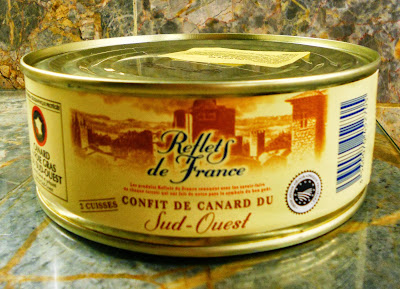 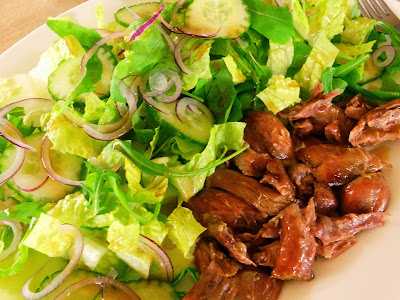 I used to buy this duck confit when I lived in Antibes: I nabbed this one in Carrefour during a shopping trip at the Cite Europe on the other side of the Channel Tunnel.

Taste and simplicity: you empty the tin into a large saucepan, allow the duck fat to melt and the duck legs to warm through. Et voila! Pour off the fat, use the meat in a salad, as I did, or as the base for a 'duck' cottage pie. Or just scoff it off the plate on its own. It has been known.

I made a salad dressing with a couple of tablespoons of the melted duck fat, some home-made orange jelly and a splash of balsamic vinegar.

And all my flatness disappeared. And a little more roundness took its place.