on September 25, 2013
In Venice there's a People Mover, a half mile long funicular-type overhead railway, that connects the cruise terminal to Piazzale Roma, at the western edge of the intricate web of islands, canals and bridges that make up the city of our imaginations.

My flights of fancy about Venice were first fuelled, in the early 80s, by Pizza Express's Pizza Veneziana (a snippet of the cost of each pizza was given to the Venice in Peril fund) and, in the early 90s, by reading Thomas Mann's Death in Venice as part of my Diploma in Comparative Literature, a novella which is a fetid hothouse of decay and destructive eroticism. Hey, what's not to like? But Venice has the reputation of being the most romantic city on earth and my first reaction, after stepping off the People Mover and wandering along the minor canals, is satisfyingly predictable. Every bend, every building, every wooden boat dock elicits a sigh. I don't even mind paying 12 Euros for a bottle of coke and an orange juice outside a little bar in one of the out of the way piazzas, although the irony that the orange juice is made of blood oranges isn't lost on me.


But the closer I get to St Mark's Square the less enamoured I become as subtlety gives way to brashness and overcrowding. And, at the risk of being called a Philistine, I just don't get the fuss about the square. It's an ugly stone tundra.

I suppose September is still considered a high tourist season so perhaps I only have myself to blame. I'm also to blame for not checking my change after buying a couple of water taxi tickets on the banks of the Grand Canal. As I walk away I realise I'm 4 euros short though the hand-written English notice on the booth window telling me, and every other English-speaking tourist, that I should have checked it before leaving means there's no way I'm going to get it back.

It's funny how little things like that can colour your view of a place. Perhaps unfairly. Perhaps not. The man who served us in the bar just clipped the edge of politeness. The ticket-booth guy was fully trained in unarmed hostility.

Perhaps the people of Venice are fed up with all the visitors and tourists. And particularly the cruise ships as recent newspaper reports illustrate. 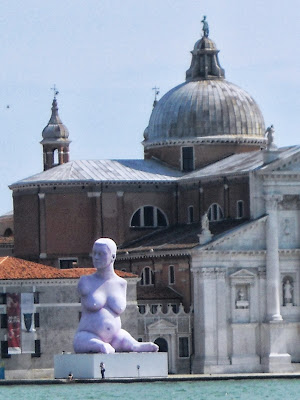 Giudecca Canal back to the ship: a 35 ft inflatable replica of Mark Quinn's sculpture, 'Breath', of a naked and eight month pregnant Alison Lapper, the disabled artist who was born with no arms, on the island of San Giorgio Maggiore.

It's not something everyone in Venice was happy to see though. The Catholic church said, diplomatically, that it was 'out of place'. Other people think that the inflatable version doesn't have the presence of the original 11.5 ft marble sculpture, made from Carrara marble, the same stone Michelangelo's David was carved from. Some feel that it's too obvious a way of encouraging us to re-examine our attitudes about beauty and the human form. You can read more here and make up your own mind.

For me, it's beautifully brave and honest.

Hungry Writing Prompt
Write about a time when you were brave.