on September 11, 2013
I’ve worked out that there are only 30 minutes of each day when I cannot be sitting at a table and chowing down. That’s between 11am when the Waves Grill closes after breakfast and 11.30am when it re-opens for lunch.  And I wouldn’t have to restrict myself to breakfast in Waves; there’s also the Grand Dining Room, until 9.30am, or the Terrace Café, until 10am.  And I’ve just realised that if I’m really and truly, dangerously even, in need of sustenance during those barren 30 minutes I could always take a trip up to the 12th deck and snack on the miniature rolls and cakes tucked away, with fresh fruit juice, in the corner of Barista’s coffee bar.

Yep I’m cruising. I embarked as a passenger in Venice on 7th September and I’m likely to leave as cargo in Lisbon on 29th.

I’m wondering if people on an Oceania cruise reach an immunity level to the availability, quantity and astonishing choice of high quality, freshly prepared food. A little like  people who start work in chocolate factories and are told they can eat as much of it as they like, as often as they like, and within two weeks have been cured of any desire for the sweet milky drug. I’ll let you know when the novelty of being served, and eating, breakfast, morning coffee, brunch, lunch, afternoon tea and dinner has worn off. Portion control, that’s the trick. Will someone please show me how that trick works? 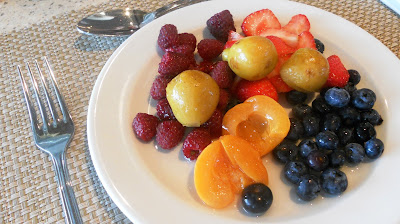 And if being gastronomically assaulted from all sides on board ship isn’t enough there’s also the food ashore, like this lunch I had in Dubrovnik a couple of days ago: blue cheese risotto garnished with freshly grilled Adriatic shrimp. 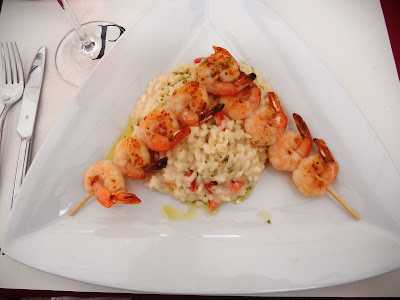 The old walled city of Dubrovnik is a UNESCO World Heritage site though that didn’t stop the Yugoslav People’s Army from shelling it in 1991 during the Croatian war for independence, an action that contributed to the diplomatic and economic isolation of Serbia and Montenegro and led to the international recognition of Croatia as an independent state.

Walking through the old city today it’s hard to imagine what it looked like two decades ago.  It’s even harder to imagine the violence and atrocities that took place in the region too, neighbour turned against neighbour, even families dissected and destroyed. Twenty years isn’t a long time. What were you doing in 1991/2? I attended my first ever residential writing course at Ty Newydd in North Wales. I was running my second-hand bookshop, Foxed & Bound, and studying part-time for a Diploma in Comparative Literature. People in the Balkans were living in fear of their lives. They were grieving and dying in the onslaught of racial and religious hatred whipped up by political factions.

Today the ship stops at Giardini Naxos in Sicily, the site of the first Greek colony on the island. In the archaeological museum there’s a display of pots and bowls and amphorae, the ordinary vessels of daily life from the 6th and 7th centuries BCE.

The lived, they ate, they died. Nothing much changes. Even how we treat one another. What happened in the Balkans shocked the world. We didn’t believe that those kinds of atrocities could happen, again, in our post-holocaust ‘civilised’ West. Will human beings ever learn?

Hungry Writing Prompt
Write about excess, going too far, about too much of any one thing.

Unknown said…
Sorry I am not the right person to advise on portion control. I certainly don't want to miss any eating opportunity :) Enjoy the rest of your cruise trip!
08:57

Norman Darlington said…
Me too. Eyes always bigger than tum, though latter tends to expand to meet expectations! On your final question, every day's news makes it clear the answer is a resounding "No" :/
09:21

Lynne Rees said…
Oh I love eating so much too, Michael! I did reach a kind of saturation point after 10 days... though it was more about acclimatising to the extensive choice, and being selective, rather than trying to cram something of everything onto my plate rather than portion control!
20:09

Lynne Rees said…
Hi Norman - yes, you're right. I still want to believe in the general goodness of human nature but it's difficult at times.
20:13