Every self-respecting French patisserie in Antibes sold them. Friandises: miniature cakes and desserts that we'd probably call petits fours. Eclairs, lemon and fruit tartlets, mille feuilles, chocolate and raspberry mousse - dozens of little bite-size delights. Everything you'd ever want a dessert to be but smaller.

But I didn't truly appreciate them until I had my first Café Gourmand while I was living there: a dessert alternative that combines a kick (or two) of espresso coffee with three tiny sweet bites. It's an invention that restaurants in Britain haven't embraced. Or I thought they hadn't until I visited the Brasserie Blanc in Chancery Lane, London this week.

I could go on about the grass fed Cornish fillet steak that Tony had. Or my grilled scallops, crushed new potatoes with prawns, and glistening dish of buttered french beans. In fact, we could perhaps just pause there: 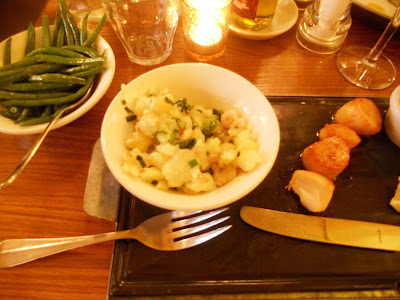 But it was the words Café Gourmand on the dessert menu that really made me swoon. I'm not generally a dessert eater in restaurants - too much, too sweet, too filling. So I truly believe that Cafés Gourmands were invented for people like me. Just enough sweetness, cut with a shot of coffee, to satisfyingly crown a meal.

Marks & Spencer do a range of mini-desserts that you can order: tartlets, macaroons, cupcakes. And Waitrose, as you might expect, offer a selection of Petit Fours by Didier (or Dennis as his colleagues prefer to call him - just kidding!). But it's not the same as leaning over a glass case and selecting your own friandises - trois tartes au citron, s'il vous plait. Attends, non, je prends quatre - and waiting while Madame places them individually in a white cardboard box which she seals with white or pink or yellow ribbon. Gently swinging a cake box between two fingers as you walk along Boulevard Albert does not compare to hoiking a carrier bag through a supermarket car-park.

So, thank-you Raymond Blanc and the staff at Chancery Lane for the sweet swoon of memory.

Hungry Writing Prompt
Write about a meal which forms the background of scene between two or more people. Use each course as part of the dramatic structure. Close with the smell of coffee, something sweet and one person's memory.
at August 02, 2013

A friend and I are working out the mechanics of making Petit Fours for sale, I have a thing for macaroons, pistacio and blackcurrant especially, I also have a hankering for making one of the glorious Raymond's apple and creme patissiere tarts. I love little tasters and oh so miss a local Waitrose. If all goes to plan, Belle Etoille will see the light of day, complete with the ribbon tied boxes.
Brenda

Two of our favorite restaurants in town have closed. I think my saying "it's my favorite restaurant" is the kiss of death (perhaps I should start saying Mickey D's is my favorite!). Anyway, after the meal I would ask for a single chocolate truffle, even though it wasn't on the menu. They most always had one for me ;-). Just a bite of something sweet is all you need. Yes, the French have it right!

Good old M&S. Might have to pop in for their substitute now you've made me soooooo hungry!

That'll be brilliant, Brenda. And I love the name too. Good luck.

Our nearest patisserie in Antibes made their own macaroons - the vanilla ones were heaven. I tried some that were for sale in a little shop in West Malling a few months ago. Big mistake. A freshly made macaroon is very different from something that's been stored for weeks!

Oh yes, a single chocolate truffle would do it for me too, Terri. I might start carrying those small chocolate favour boxes in my handbag so I can make my own 'cafe gourmand' when I'm eating out!

I haven't tried their mini cakes/desserts yet(though their trays of sandwiches are lovely!) But I might order some later this month to make an afternoon tea... because if this heat keeps up baking scones and cake for a few hours won't be at the top of my list of things I want to do!