Clearing out the Fridge: The Reality

on August 17, 2013
When Nigel Slater clears out his fridge he finds oyster mushrooms with a 'woodsy' scent nestled in a brown paper bag and some Taleggio cheese that's creamily ripe with an attractive ooze. He also found some left over thick slices of bread cut from what looked like a wholemeal seeded batch loaf.

I cleared out my fridge yesterday. There was a not quite as attractive oozing third of a cucumber, a small dish of sliced lamb left over from lunch last Saturday that had taken on a greyish tinge and a half eaten pot of fizzing tzaziki a week past its use-by date.

That's the difference between TV and real life. And I'm sorry, Nigel, but bread cannot be categorised as 'leftover' unless it has curled crusts or a sprinkling of penicillin growth.

You can catch up with Nigel's leftovers adventures on iPlayer. I'll save you the graphic display of mine.

But I do have a simple snack that only requires three usually available ingredients and a microwave for when you want to simulate cheese on toast but are lacking in the Slater leftovers and either don't have a grill, or don't even have any bread. I call it 'easy cheesey'. 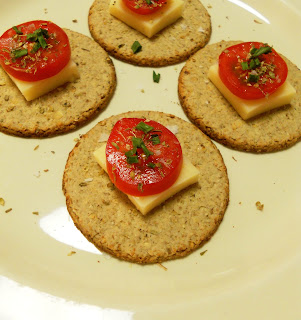 Depending on your microwave, and how many crackers/biscuits on the plate, you're looking at somewhere between 10 and 45 seconds. Peek through the glass door until you see the first hint of bubble then take them out. Beware eating them when they're too hot. We've all been there.

Perhaps it's the nostalgia of melted cheese that, to me, makes it different from cheese on toast. My paternal grandfather, my D'Cu (dadcu is Welsh for grandfather) used to melt cheese in a glass dish in front of an open fire then spoon it onto fresh cut bread. When I put a round of fresh french bread, topped with a slice of cheddar, or the Welsh cheese, Y Fenni, a cheddar with mustard seeds and ale, into the microwave for 10 seconds I am back in that kitchen in Dafen, West Wales, a plastic cloth on the table, a can of condensed milk for tea. With my D'cu:

When he died I said, No, I didn’t want go upstairs and say goodbye. A week later, he was the old man who called me his ‘lovely girl’ as I packed his frozen chicken and packet of custard creams at the supermarket checkout. And now he is always leaning on the front gate in a collarless white shirt, sleeves rolled up above his elbows. Sunlight glints off the close-cropped silver stubble on his head that he had trimmed monthly without fail.

from forgiving the rain, Snapshot Press 2012