That's what my step-daughter said when she saw them. And she has a point: these are vegetables who'd insist on straightening all the cutlery, folding each napkin exactly. Vegetables that would tell you to sit up in your chair and keep your elbows off the table. But you'd forgive them for their insistence on order and their interference after you've brought them to silence with a knife and fork.

I've had a recipe postcard for these in my cookery scrapbook ever since I moved back from France over 18 months ago but the British summer weather hasn't been conducive to the colours and flavours of the Mediterranean... until last weekend.

I also invented (I use that term loosely!) a burger wrap. Chargrilled burger, sliced red onion, salad and a few dabs of piri-piri hot sauce all neatly enclosed in a wheat and white wrap. I think the OCD vegetables had more of an effect on me than I realised!

I think it's still in its developmental stage though. Putting the wrapped burger back on the chargrill, just for a minute each side to get those lovely grill marks, would improve it. I'll keep practicing though as it was a massive improvement on those strangely soft and synthetic burger rolls. 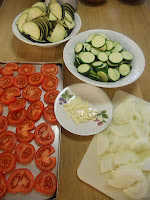 The vegetables start out in a rather more relaxed form. And there's really not too much to say about them. My french recipe suggested 'sweating' the tomatoes with a sprinkling of salt. Next time I'll lay them on kitchen paper to absorb the water and also do the same with the courgettes.