The base for our new greenhouse is down and dry and officially approved by a couple of the local cats. It is a universal law that no area of fresh concrete will survive without the gift of feline footprints. There must have been some serious toe licking going on this week.

Other news from the farm front is that we have, thankfully, sold the apple crop in advance. Last year's crop was the poorest in a decade, like many apple orchards around the UK, and no commercial buyer was interested in what scant fruit there was so we juiced a few ton ourselves. This year's harvest will definitely be an improvement but the wet and cold spring were not kind to the blossom and pollination (we still have little pockets of blossom around the orchard now!) so we'll be selling 'per bin' picked. The apple-buyer reckons that he'll start picking around the end of September, nearly a month later than usual, a sign of the late development and growth despite the subsequent heatwave we've been experiencing. 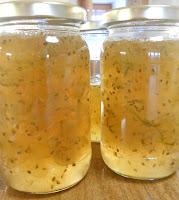 Which is not the ideal weather for making jam. But it was the best option for a couple of pounds of gooseberries our cherry farmer friend gave us. I know there are fools and crumbles and pies but Tony's not a fan of 'sharp' fruit in any dessert and I could imagine his face puckering like a crumpled paper bag. And, even better, gooseberry jam has to be the easiest jam to make ever. Its high pectin content makes it set in a boiling whizz, and it looks so pretty too.

I also discovered that it goes amazingly well with cheese, in particular the creamy, and gradually more pungent as it ripens, Pie D'Angloys. Add a crusty french stick, one of our recent, delicious, balmy evenings, and you'd be forgiven for thinking you were on holiday in Provence. Although gooseberries wouldn't be the easiest thing to find there - hot, dry summers on southern plains are not the best climate for them.

The origin of their name isn't clear. If you want to associate them with geese you probably can. Or even fish. The French call them groseilles à maquereau - mackerel berries. And they do sit nicely alongside them too.

And to add a sprinkling of British bawdiness to the discussion, 'gooseberry bush' was 19th century slang for pubic hair which is where we're supposed to get the expression of being born 'under a gooseberry bush'!

(If you'd like to know more about growing your own gooseberries you'll find all the information you could possibly need at this link on Garden & Happy.)

Linda Baumber said…
Dear Lynne, this not about apples or gooseberries but, in my mind, chocolate. I have been lucky enough to get my hands on a copy of your book Messages and I love it so much that I have to limit myself to a few messages at a time - just like opening a new box of chocolates and wanting to eat the lot in one sitting! Messages is a delight that you and Sarah must be so proud of. xx
11:14

Lynne Rees said…
Thanks so much, Linda. Sarah and I loved writing that book together. So pleased you're enjoying it. We've spoken a few times about getting it back into print... we'll have to talk more. x
12:36

Gill Edwards said…
well you learn something new everyday, i never knew about the 'under the gooseberry bush' meaning before. Lovely blog too.

Lynne Rees said…
Hi Gill and thanks for posting. So pleased you like the blog. Best wishes, Lynne x
09:32