Wibbly Wobbly. Or Not.

on June 11, 2013
I posted a link about champagne on Facebook recently. Scientists reckon that drinking between one and three glasses of champagne a week might counteract the memory loss associated with ageing and even help delay the onset of dementia.

There was half a bottle of Nicholas Feuillatte in the fridge last night, the still bouncy, sparkling leftovers from a lunch party on Sunday so I poured myself a glass and sipped it while watching You’ve Been Framed. (People falling over to Harry Hill’s witty commentary really cheers me up.) When I sidled into the kitchen during the commercial break for a refill, and a few slices of Wensleydale with cranberries on some fine milled oatcakes, I forgot to take the glass back with me. Up I got again, chatted to Tony who was making a cup of tea, then headed back to the lounge. Yep, that’s right. I forgot it a second time.

I blew apart a decade of research in the space of three minutes. And this morning my finger joints ached like bicycle pedals left out in the rain for months. Is champagne trying to tell me something?

So what do you do with leftover champagne? Now there’s a question I never thought I’d ask myself; the surprises life throws at you as you get older. Google offers me recipes for Champagne sorbets and sauces, for cake-pops and jellies. I plump for jelly and put my trust in Delia.

After the trauma of working out how to convert leaf gelatin into its powdered equivalent I had hopes that the rest of the process would go smoothly. But nearly an hour and a half later my jugful of lemon and sugar, heavily gelatin-ed syrup is about as gelatinous as water. Delia says it should be starting to set by now, at which point I’m supposed to add my half pint of champagne, mix gently then pour it into jelly glasses to set to a soft wobble. However, my frosted grapes are looking cute.

I should probably give up now. But I’ll wait for another hour or so to see if it begins to firm up. If not, then I’ll be forced to pour myself another couple of glasses of champagne tonight to finish the bottle while it still has a trace of fizz. If I remember. 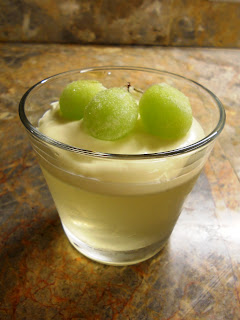 After adding a few more sheets of gelatin to the syrup, before I poured in the champagne, the jellies did eventually set. And very pretty they are too. I used creme fraiche on the top (rather than following Delia's idea for a syllabub) but plain double cream would be better. Or really thick vanilla custard.

I didn't manage to keep the bubbles showing in the jelly but I was using leftover champagne (albeit with some fizz left in it). I just couldn't imagine opening a new bottle of champagne JUST to make jelly. Oh no!

Caroline said…
Egg white and sugar to frost the grapes? I would like to write about waiting for living in an 18C stone lock keeper's cottage in Brittany to begin, about leaving Dover behind, and surrendering to living my long-held dreams. Everything else would be leftovers, but I wouldn't waste them xx
21:52

LoriAngela said…
Love this post! The trauma of the math. Can I use that next time I have to alter a knitted sleeve? I did my refresher RN course after raising my kids for 12 years. I was frightened by the amount of anatomy and physiology I forgot. But my brain and body still worked in the vapid state.
16:21

Lynne Rees said…
Thanks LoriAngela! These days I forget the title of any novel I've read within days... the name of the author goes next. Which is the reverse of the order given by Billy Collins' in his poem Forgetfullness but as equally true. Here's a link if you don't know it already: http://www.poemhunter.com/poem/forgetfulness/
20:22