Tomorrow I’ll say goodbye to a friend I made while writing Real Port Talbot.

Ray Davies Snr was a retired steelworker who painted as a hobby, recreating the town’s lost history in acrylic and canvas. Streets and seascapes, hotels and docklands, rivers, bridges and railways. I met Ray for the first time last year at the house in Port Talbot he used as his painting studio. He made me a frothy cappuccino sprinkled with chocolate and tucked a napkin onto the saucer that was printed with a Welsh red dragon and Bore Da! (Good morning.) 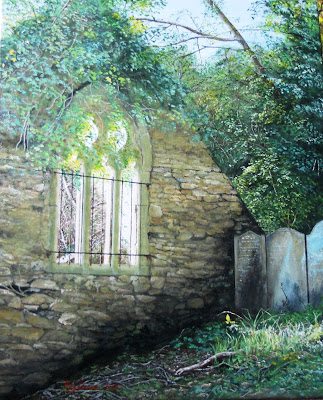 As I sipped he placed painting after painting in front of me, each one a story, each one a piece of magic to conjure the town I remembered from my childhood. A week or so earlier he’d asked me, via Facebook, if he could use one of my photographs of old St Baglan Church to paint a picture. And suddenly there it was, so much more than its original self, layers of shadow and sunlight, all shades of green nudging the worn inscriptions on old stones.

Would you like it?’ he said.
‘I… you mean… but how can…’ The stuttering went on for some time.

An astonishing gift from someone I had only just met, a gift offered with such humility and generosity that I almost cried.

Ray died on 12th April. The last word he said to me was, ‘Thanks’. I’d asked him if I could use a photo of one of his paintings in Real Port Talbot and he thanked me. Thank you, Ray. For the cappuccino and our brief friendship. For the history and vibrancy and sensitivity in your paintings that will always remind me of you.

(You can enjoy a selection of Ray's paintings on the Historical Port Talbot website.) 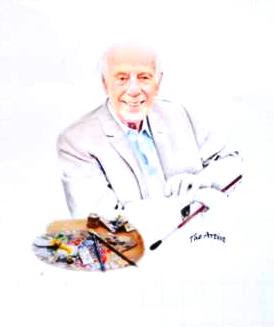 Unknown said…
I was lucky enough to have a lovely conversation with Ray at the Aberavon Beach Festival last year, he kindly talked me through several of his paintings. It was a privilege and an honour to meet him and see his work. He was so incredibly talented and always the consummate gentleman. He will be missed .
22:37

Lynne Rees said…
Thanks so much for adding your thoughts here, Anne. x
18:30

Anonymous said…
I only knew Ray through Facebook and his paintings of the town, the most memorable one being the carriages of the train as it passed through the crossing on it's way to Aberavon Beach. His paintings brought all my childhood memories back to life, with their vivid colours and amazing detail. He will be remembered for many generations to come, through his paintings, and I truly regret never having had the opportunity to meet him.
17:32

Lynne Rees said…
Thanks for posting, Gary. There was talk at his funeral of an exhibition of his paintings at some time in the future. I'd love to see that happen. x
18:45