Here comes the sun. And bath-sharing. (Or not.)

I'd like to think I've been channelling the sun through making these dishes but its arrival over the weekend is probably just a coincidence. Or the UK climate finally relinquishing its grip on the persistent Siberian front out of sheer exhaustion. It was like waking up in another country on Sunday morning: blue sky, 20 degrees, and one of the new cherry trees on the cusp of blossom.

I've posted my recipe for the Blush Apple Tart Tatin elsewhere on the blog though I think that cramming as many apple quarters as you can (compare the two photos of the finished tarts) into the dish before plopping on the pastry is a massive improvement.

The attempt at making Portuguese Custard Tarts was a result of our trip to the Algarve last month, ostensibly to play golf. I am using the word 'play' in the loosest possible way - as a beginner I'd have had more success kicking the ball around the course on some days. But, fortunately, there were plenty of tarts to comfort me afterwards. And a big bath in the apartment to soak away the aches from muscles I didn't know I had.

'We could both fit in here,' I said to Tony, as the bath filled, the bubbles grew to a thick sparkling raft and I started to tug off my clothes.
'What are you doing?' he said.
'Getting in,' I said.
'There's not enough room,' he said, admitting later that he was desperately trying to think of any reason to keep me out of it.
'There's loads of room!' I said. 'What are you talking about?'
'Look, Blods [his nickname for me],' he said, frantically trying to dredge up another reason, 'I'm a big bloke and I just want to lie there with my legs open and relax.'

Three days later I was still laughing. And I suppose you could say that after 28 years romance hasn't just died: it's bloody fossilised! 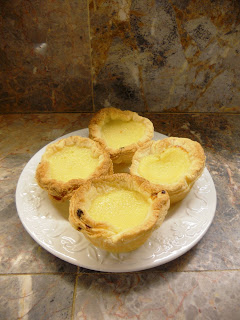 We were more in tune when we made the Portuguese Custard Tarts. As lovely as they were I think filo pastry might be the way to go rather than puff, as the recipe suggests, but I've never used filo. For some reason it scares me. It might be the warnings of it drying out easily that accompany any recipe that recommends using it, of having to keep it between damp tea-towels. It sounds like high maintenance pastry. And this recipe is an easy version, relaxing you might even say (as relaxing as you can get outside of a bath and with your legs firmly together!) courtesy of allrecipes.co.uk.

That is so funny! :)
The Portuguese tarts look beautiful. I love them but it's something I never made at home before. I have to give it a go.
And the tart tatin is gorgeous!

Hi Michael - thanks for popping by. I've just been salivating over your marinated lamb shoulder. It's on my menu list for an upcoming family weekend. Lovely.

I love your positivity! The reading was good - I felt like I was home : )