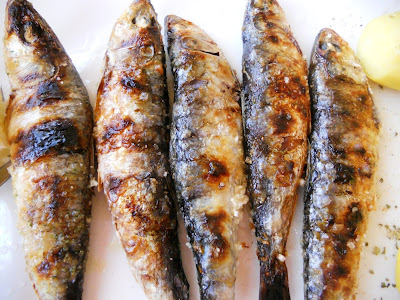 You can’t come to the Algarve and not have sardines, sprinkled with sea salt and grilled until the skin is crisp. So I did. At Taberna do Pescador in Albufeira. And they were good. Not outstanding.  Not memorable. Not as delicious as the photo promises. They were on the dry side so I think they were cooked for a bit too long. But they were still good. Tasty. 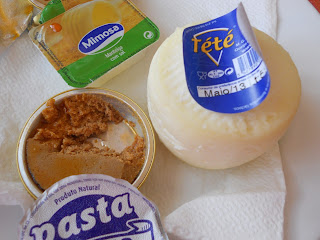 It’s out of season on the Algarve but the terraces of two restaurants that front Praia dos Pescadores at Albufeira were a clamour of tourists, mostly British, waving their arms in the air and singing along to the jolly bing-bong of a brass band performing on the raised promenade. I guess that meant they were enjoying themselves. I hate that kind of enforced entertainment, particularly when I’m trying to eat, so we forged through the throng and the excitable waiters trying to reel in more lunch victims and did a U-ey back to the Taberna where the waiters outnumbered us three to one and we chowed down on good bread, sardine spread and sweet and crumbly cheese before the arrival of our main courses.

Food is dressing the pages of both books I’m reading here, one on the Kindle, the other in paperback. I’d never heard of Ann Bridge, author of The Portuguese Escape and a multitude of other titles, before I came across a handful of her novels republished as electronic editions by Bloomsbury Reader.  She was the wife of a diplomat and her experiences of postings around the world gave her the backgrounds, scenes and characters for her novels. The Portuguese Escape was published in the 1970s but is probably set in the 1950s. The heroines are feisty and independent but they know (or will come to understand) their place in the patriarchal order of things. The romantic male protagonist (the British one) dresses in tweed and drives a Bentley. And there’s more than a whiff of support for President Salazar, the dictator who ran Portugal until his death in 1968. The regime was subsequently ousted by the Carnation Revolution in 1974.

‘He dictates this country, no?’
‘NO, and no twenty times!’ Richard exploded. ‘He guides it.’
(Kindle Location 945)

Guidance? Yep, that's what most fascists tend to offer. But I'm still enjoying the story. It’s a bit like watching an old black and white movie. I’m entranced by the plumby accents, the clothes, the cars, the pressure cooker emotions. And the food. ‘… meltingly tender young French beans, then cold veal with salad followed by a delicious local cheese — all washed down with good red wine…’ Even the Communists who abduct our Hungarian heroine eat reasonably well: ‘…an omelette, some bread and cheese’.

‘And is it not a form of blasphemy to abuse the gifts of God by bringing them badly cooked, and therefore horrible, to the table?’ proclaims our heroine.
(Kindle Location 970)

Switch God for Nature then I’ll chant that message too.

My paperback is a Sue Grafton Kinsey Millhone PI novel, S is for Silence. Grafton’s novels have been my indulgent holiday reading for years: sharply written and atmospheric with convincing characters. And Kinsey likes to eat too, the kind of food you stop talking for and lick your fingers clean when you’ve finished, the stuff that healthy eating gurus warn you against. Barbecued chunks of beef, rubbed with salt, pepper and garlic salt, and served in thickly buttered rolls. A Kaiser roll, ‘buttered and laid on the grill until the bread was rich brown and crunchy at the edge. Rings of spicy salami had been soldered together with melted cheese — Monterey Jack infused with red pepper flakes. When I lifted the top, the yolk of the fried egg was still plump, and I knew it would ooze when I bit into it, soaking into the bread.’

I admit the latter might not be every gourmet’s dream but I’d happily take one of those after a day’s work. Who am I kidding? I’d take one after a day of doing nothing.

And what do I have to look forward to at my next physical, as opposed to literary, meal? Prawns as big as a baby’s arm. Some butter and oil, a little garlic, salt and parsley. Fresh bread and a tomato salad. Life is good. But it’s about to get better. 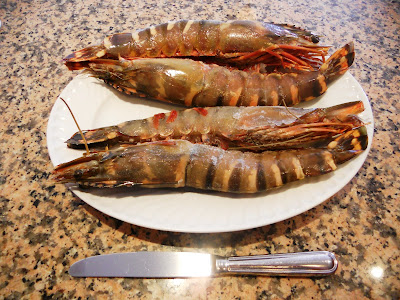 (Yes, that’s a full size dinner knife in the photo, about 10 inches long.)


Write about a memorable meal.
Write about someone on holiday.
Write about a favourite old movie.
Write your own definition of blasphemy.
Write a list of things that make life good.
Ann Bridge Portugal prawns sardines Sue Grafton The Algarve writing prompt