Reading the menu. Paying the price.


Shortly after the Midland Bank transferred me to their offshore offices in the Channel Islands, in April 1978, the company’s external auditor, Mr Wu, invited me out for dinner along with a posse of his favourites from the banking department.

I think the invitation was made more for my decorative qualities than my contribution to due process during the yearly audit: I’d only been there for less than 2 months. But I was 20 and in awe of the promise of sophistication offered by  Jersey’s restaurants, in comparison to South Wales, so despite feeling out of my depth I went along, hoping I’d say the right thing at the right time. I hadn’t given a thought to what I might eat.

Until then, apart from a couple of Italian restaurants (complete with straw covered Chianti bottles), my dining out experience had been limited to Berni Inns, a chain of restaurants first launched in the UK by the Welsh-Italian Berni brothers in the late 1950s: a reliable choice of Gammon, Steak or Plaice with peas and chips. I was ill-equipped for a menu written in French. Although if I’d been less anxious about the whole situation I might have noticed that beneath the French names and descriptions, in a font decorative enough to twaddle your eyes, there were English translations. But I wasn’t.

Add to that a complete ignorance about the financial and gastronomic protocol of the meal – who was paying? should I choose a starter? did I like wine? – and you might begin to understand why I leapt upon the first thing with a glimmer of familiarity – boeuf.

‘Are you sure you want that?’ my head dealer said hesitantly.
‘Yes,’ I said, with cheery faux confidence.

Sophistication did not welcome me into her arms that night. After smiling, hungrily, through other people’s starters of Moules Marinieres and home-made chicken liver patés, it took a herculean effort to maintain the grin when my main course arrived: a thick, plain rump steak topped with a stack of deep fried onion rings. Disappointment soaked through me like cold drizzle. The memory of the rest of the meal is lost to me. Though the whole ‘deep-end’ learning experience had a significant effect: I made sure to read all future menus properly. I still do.

There wasn’t a menu as such at the pub we ate in last night not far from where we live – I’ll call it The Scratched Salmon, The Bloated Bass or The Hopeless Herring in recognition of its true alliterative name. The dishes were chalked on blackboards on the wall and above the bar. ‘Can be a bit fatty!’ written in parentheses underneath Shoulder of Lamb alerted me to the possible level of the chef’s culinary knowledge and skill so I decided on something less challenging, more pub-grub and surely pretty risk free: home-cooked ham with a fried egg. How wrong I was. I asked the waitress whether the ham was genuinely home-cooked.

‘Oh yes,’ she said. ‘I’ve seen it’. Seen it doing what?
‘It’s just that it was very bland and spongy,’ I said, pointing to the majority of it left on my plate, crowned with the remains of an egg, also devoid of any flavour.
‘I’m sorry about that,’ she said. And cleared the table.

Perhaps it was me though. And Tony. His scampi was the ‘homogenous, mealy bread-crumbed straight out of the freezer’ version. And dry. And our friend, whose suspiciously extravagant monkfish (with a prawn, lobster and brandy sauce) appeared to have lost all dimensions of flavour, and prawn, lobster and brandy, during its journey from the kitchen to our table. Yes, perhaps it was us. Because the place was packed. The restaurant was full and we’d managed to book one of the last tables in the bar. And it was on the pricey side too. £10 for ham, egg and chips. Though I wouldn’t have flinched at the price if the ham had been even half as nice as the joint my mother par-boiled then roasted with honey and mustard and sliced to delicious wafers of sweetness that melted in my mouth when I was in Wales last month. So maybe we were all unlucky. Or perhaps the place has been trading on its allegedly considerable reputation for so long that the people who go there are immune to the mediocrity that’s now on offer.

I’m really not that difficult to please when it comes to food. Quality and taste are far more important than inventive sauces, exotic ingredients or plates elaborately dressed. I arrived home, grumpy, and had a thick slice of six grain bread spread with lemon and coriander hummus to cheer myself up. This morning Tony made me pancakes with butter and Demerara sugar. I’m starting to pick up. 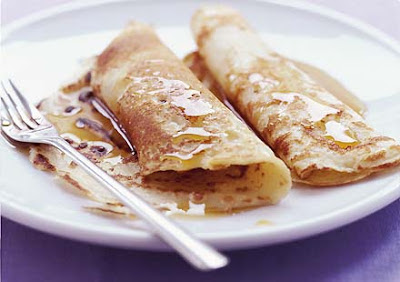 jem said…
Your post made me smile - I remember our family's first trip to France, our first trip abroad! My parents scared rigid by the language looking to me with my minimal school French. Trying to order anything we might enjoy - after days of chicken my Dad branching out to try some different, enjoying it although it was a bit 'offaly', then checking what it was once we got back to the French dictionary to discover he'd eaten tripe sausage!

It's hard to believe now but there was a time, not that long ago where 'foreign' food really wasn't commonly eaten in the UK. I'm glad times have changed!
09:59

johndavies said…
Fab photo Lynne - oh and the blog was quite interesting too!