Fun on a plate

on February 09, 2013
I'm turning into Cher. Not the one who seems to have difficulty smiling but the one who appeared with Bob Hoskins and Winona Ryder in Mermaids in 1990. It's a few years since I've seen it but I remember that Cher's character, a single mother, never cooked. Instead she concocted plates and plates of hors d'oeuvre, amuse-bouche, canapés, appetisers, finger food, nibbles.

Amuse-bouche: I learnt that while living in France. If you were with close friends you could say amuse-gueule (jaw, as opposed to mouth, perhaps an equivalent to our use of gob).

I've never used hors d'oeuvre. Apart from wanting to say 'horses doovres' in a bad London accent I don't like what the words mean: apart from the (main) work'. It's too clinical.

Canapés, strictly speaking, are little mouthfuls of something on bread, toast, blinis, crackers or pastry. I suppose these qualify as canapés: 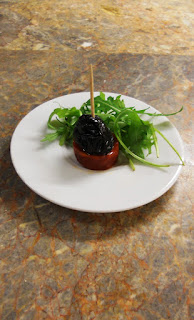 Appetisers get confused with first courses. Finger food says 'buffet' and the older I get the more hostile I feel towards buffets. I want to sit down at a table with cutlery and condiments rather than have to stand up, balancing a glass and a range of food that shouldn't be sharing the same plate and look as if I'm enjoying myself. So I suppose my little invention of chorizo and prune (the less adventurous amongst you: please stay with me!) will either have to be filed under nibbles (which is a touch too twee) or I'll need to find a new word for small tasty things that precede a meal. Preceders? No, that sounds like a 1970s television series.

You're going to have to like chorizo to like these, but you don't necessarily have to be a big fan of prune, because that acts as a sweet foil for the spicy sausage, creating a combination that is simply delicious. Oh, you serve them warm too. Less than 10 seconds in the microwave for a couple. Up to 30 seconds for a small plate. (Warning: they spit. But don't hold it against them.) 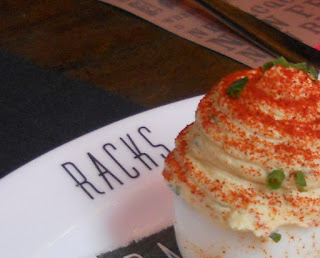 I had Devilled Eggs in Racks at Mizner Park in Boca Raton last summer. This was Florida so they were more small meal than little mouthful. A whole family of mouths could have bitten into one of them, at the same time. I've only played with egg appetisers once: hard-boiled and peeled quails' eggs served with three types of salt - sea, celery and garlic.

I can understand why Cher only made little snackettes: they say 'party'. They're fun (at least, they should be fun) no bigger than one bite, and nothing too squirty or at risk of collapsing between the plate and anyone's mouth. And music. They should be served with music. And here's a short, spontaneous and eclectic list of some of my snackette party music. You may, of course, add your own.

Have snackettes. Have fun.