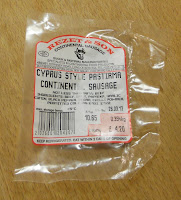 I am starving and excited to discover a pack of beef sausages in the fridge that my step-daughter bought for me at Christmas: part of a 'tastes of Tottenham' hamper that included chinese rice crackers, mango, fresh ginger, coconut, garlic cloves in chilli and greek yoghurt.

98% beef the label says and they have a delicious piquant aroma while they're cooking. I love merguez, the north african spicy lamb sausages so popular in France, so I have high hopes for these.

A dish of shredded steamed cabbage sounds like the ideal vegetable to go with them although the idea of 'sausage and cabbage' immediately conjures the image of a toothless and head-scarfed eastern-European woman ladling soup into a wooden bowl. Any fertile imagination will sometimes draw on a bank of absurd racial cliches...

But I do want to like this dish so much. It sounds tasty. And it looks lovely:

And it's not that it tastes bad exactly, more that it has all the characteristics of 'filling' and not many of 'satisfying'. It's perhaps the spice that's overdone, making me suspicious of the quality of the meat. Or maybe the heavy minced texture of the sausage that's unappealing. But I eat it anyway. And feel even more like a babushka, my thick socks wrinkling around my ankles, chewing my toothless gums in front of an open fire. The open fire bit is true.

More of a successful experiment this week was almost-instant treacle sponge pudding. I've only ever tried one other microwave cake recipe before - a chocolate cake in a mug - and it was pretty dire. But this one really worked out well. I recommend adding about four times the quantity of treacle though. Here's the finished pudding, microwaved in a plastic Christmas pudding container I'd saved.

And here's the recipe: 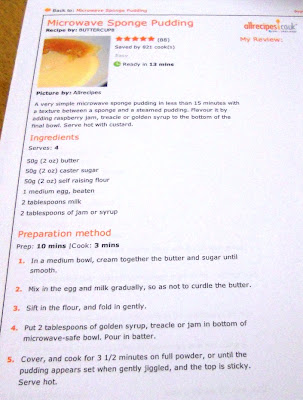 You have to eat it all straight away, or within an hour or so. It hardens to a hollow-knock by the next morning. But I'm sure you won't have a problem - the 'Serves 4' on the recipe is optimistic to say the least. Unless you're a family of Mbutsi pygmies.