Apple Butter... oh oh, I feel an analogy coming on 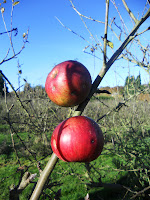 I should know better.

I'm the one who nipped Tony's analogy-making in the bud when the phrase, 'If I could just make an analogy...', was becoming an unconscious habit rather than an occasional interruption. I'm not against analogies per se. I just don't want to be force fed one in every conversation.
But here I am about to serve one up in a jar for you.
I think we've done our last picking in the apple orchard. What remained on the trees of the Golden Delicious and the Cox have long dropped. Pecked by pheasants and drenched in rain they have slowly dissolved into the earth around the trees. The Ida Reds are hardier and most of them are still on the bare branches, a remarkable sight last weekend: red apples in bright winter sunshine against a blue sky.
We won't manage to pick them all though: we invested in 300 bottles and have chopped, crushed and juiced enough apples to fill 220. The latest picking has yielded enough for the remaining 80. We've worked out that 5lbs of apples produce 1 litre of juice. And while the apples we did get from this lousy season were too few for the commercial juicer to buy from us there were still far too many for us to process with our cottage industry grinder, press and pasteuriser.
I've used up 10lb in the last week making apple butter, which has nothing to do with butter as we know it and more to do with peanut butter: i.e. something thick that spreads. But the reality of it is so much more wondrous than the clumpy linguistic-ness of 'spread'. If I believed in angels, and they cooked, then this is what they would fly out of their kitchens with. Fragrant. Delicate. Meltingly smooth.
I'm just going to give you a visual feast and save the analogy for a succint closing statement.
And the analogy? Astonished as I was by the slow transformation of apples and spices into this concentrated result I couldn't help thinking of how Real Port Talbot has evolved over the last year. I started with reams of local history, hundreds of contemporary news stories, scraps of memoir, poems, and several dozen cups of controlled panic. I now have 52,000 words of a MSS, with 13,000 to go, and I can see the end result. The panic has dissolved. I suddenly understand what I'm doing and I'm nearing the end. And breathe.
It's difficult to see order when we're in the middle of chaos. Sometimes we just have to trust it will emerge.
And one last photo: apple butter on a freshly cooked pancake. Worth any amount of chaos and time spent. Add creme fraiche for perfection.

Caroline said…
Sounds delicious! I'm going to give it a go.When we eventually get together, I'll bring you a jar of quince jelly from my garden's fruit :)
19:50