on October 17, 2012
I'm attracting bad food. And in places where I really don't expect to. I tried Carluccio's Pasta Fritta a couple of weeks back - pasta 'crisps' with herbs and sea salt. Sounded good, something savoury to go with the pre-dinner olives and wine. No. They are two words I do not want to see together again, on the page or on a plate. Think salted, wilted cardboard. Perhaps I was unlucky. Carluccio's is generally a good bet. Perhaps I should have stuck with the pasta as a maincourse though because my Italian Sausage with Lentils didn't win any prizes for its looks and only scraped above an average mark in taste. I didn't complain about the pasta crisps and I should have. There could be someone in the kitchen who needs to be told they're doing something wrong. And there was someone in the kitchen at the Giant's Bar in the Mermaid in Rye yesterday - a restaurant and hotel whose reputation has muscles on its muscles - who needed telling. 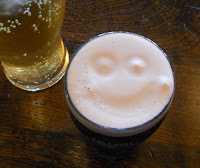 You'd think that even your least experienced kitchen member could lay out a cheese and charcuterie platter, wouldn't you? It sounded good if a bit pricey at £20. The Mermaid Deli Board - hot baked cheese, cold meats, chutneys, pickles, home made bread - and the prep was impressive: a waiter brought one of those tiered metal stands that normally holds a plate of Fruits de Mer to our table, laid out silverware, plates and napkins. I'd drawn a face in the foam on my half a Guinness. Tony was sipping a pear cider. We were happy. Then the food arrived.


Think of three small twists of singed baking parchment each holding a smear of liqueyfied, unrecogniseable cheese. Now think of the unnatural sweaty pink of thick sliced processed ham. A single rumpled circle of Italian salami. And the tour de force: a slab of chorizo. The kind of slab you get when you open a packet of ready sliced chorizo and instead of unpeeling each slice and layering them on a plate, you just pick up the whole thing and slap it onto some salad leaves.
The Restaurant Manager took the plate back into the kitchen and came back with the chef's apology: he hadn't supervised that plate, hadn't checked it before it left. We could have something else, anything at all, or a refund.
By this time we'd eaten the three small bread rolls (Three?? Were we supposed to arm wrestle for the third?), the contents of the butter dish and the ounce of chicken liver pate on the plate. Not a substantial lunch but the trouble with bad food is that it puts you off eating anything else. We took the refund. But paid for our drinks.
They could have been more considerate. They could have offered the drinks on the house. Or lunch for free on another day. They might have if I'd insisted but complaining once was all I was prepared to do. If they don't care enough about their reputation  to ensure that dissatisfied customers end up satisfied then why should I?


A group of people were looking for a table so I told them we were leaving. 'Don't have the cheese and charcuterie,' I said. They laughed. 'I'm not joking,' I said. Then they looked at me suspiciously. 'Really,' I said. I was starting to sound like Ray Winstone so I smiled and left.

There's a wooden carving above the gorgeous inglenook fire in the bar: it looks like dancing babies. 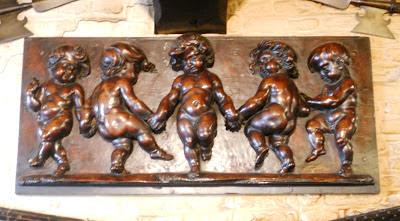 In fact, they are running away. Run, babies, run.